RUSH: You know what’s going on on television right now? You don’t need to turn on your TV. I’m going to tell you what’s happening there better than if you’re watching it yourself. The Trump administration is presenting — as part of a press briefing this afternoon — the FBI director, Christopher Wray; the National Security Agency director, Mr. Nakasone; and you know what they’re saying? The administration is developing its strategy to combat Russian election interference coming up in the November elections. 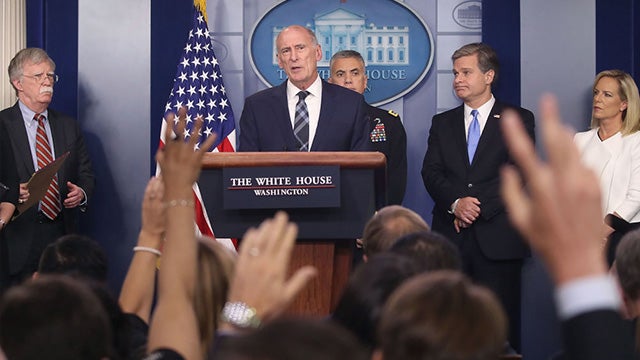 The FBI director explained as best he could without giving away any secrets what he and his partners in law enforcement around the world are doing to stop this interference, to identify it and to shut it down. The NSA director got up there and said he is doing everything he can, working with the Pentagon and the Department of Homeland Security, and implementing the latest strategy to stop the interference in the upcoming elections, because it’s already happening. We know it’s going to continue happening, and it happened in our last election.

Now the director of national intelligence, Dan Coats, is saying whatever he’s saying about this. I guess I find myself, once again, on an island all alone, because I think this is being so overblown. I mean the Russians infiltrating American institutions is so old. It’s so common. There’s nothing new about it. There isn’t anything that we have not known that they’re doing. There’s nothing new the Russians could be doing that we haven’t spotted them doing, that we haven’t come up with processes to stop them from getting away with it.

Yet ever since Trump got elected, the entire narrative has been, “That election may be illegitimate! We’ve got a special counsel trying to nail Donald Trump.” Make no mistake the Manafort trial (we’ll get into it before we end this) is all about getting Donald Trump. Nothing has changed it. It’s the singular purpose for Robert Mueller and everybody that had anything to do with him being appointed. The project, the game, the objective remains getting Donald Trump — and in that service, in service of that idea, we have to keep talking about the Russians and interference and meddling in our elections.

And what are we doing? In the process, we are conditioning everybody paying attention in this country to believe that our elections no longer are sacrosanct, that they’re no longer secure. We are in the process of raising doubt about the outcome of every election the Democrats lose. Now the Trump administration’s furthering this notion. I know why they’re doing it. It’s part and parcel to establishing the idea that Trump is not tied with the Russians, that he has no deal with Putin.

It may sound stupid and ridiculous to have to point that out, but remember what the media has been pounding people with for a year and a half, that Trump is an illegitimate winner. His presidency is illegitimate. Steele dossier! Trump was doing all this stuff with prostitutes urinating on beds. He stole the election from Hillary Clinton. Blah, blah, blah, blah. How many people believe this advances further every day the special counsel investigation goes on, and every day the media gets to report new details — of which there are none, by the way.

And today we’re treated to the fact that the entire American military intelligence apparatus is focused like a laser on stopping the Russians from meddling and interfering in the upcoming election — which we’re told today and assured that they are doing. “Trump Administration Outlines Strategy to Combat U.S. Election Interference.” So who do you think is going to win the midterms? Democrats going to take the House? Fine.

What happens if they do? Do you think there will be any concern after that outcome over Russian interference in the election? Do you think anybody going to raise the idea? If in this highly charged atmosphere where we’ve been told for a year now that there’s going to be this big blue wave — Democrats will win the House and may even take significant seats in the Senate — if that doesn’t happen, what do you think we’re going to be treated to?

Damn right! We’re going to be treated to evidence, allegations, regret, recriminations, sadness that the Russians did it again. “The Russians interfered again! Why, there it was, the polling data that the Democrats were going to have a big blue wave. They’re going to win everything! Except they didn’t. It has to be the Russians.” They have irresponsibly focused on this so much that they have corrupted, they’ve polluted the entire notion that our elections are fair and just.

What’s really frustrating about it is that there isn’t any way for anybody to change a vote or to affect the outcome of a presidential election. But when we’re talking about House races? “Why, those are just districts! Why, anybody might be able to get in there and tamper with the voting machines or prevent people from getting to the polling places or what have you.” So the wheels are being set in motion and the table is being set for there to be absolutely no trust nationwide in the outcome of the upcoming elections in November.

RUSH: Okay, get this: So I’m watching more of this White House press briefing going on during the break, and a reporter actually asked the question. He said, “So when we get to the election and people go in there and they pull the lever, how can they be sure the next day that their vote was counted fairly?” That’s really what it gets to. That’s what they’ve created. “How does anybody know their vote wasn’t tampered with?”

So Christopher Wray, the FBI director, strode to the microphone and he said (paraphrased), “Well… Well… Let’s be very clear here. You’re talking about election infrastructure, and we haven’t seen anything tampering with election infrastructure so far in the upcoming elections, not like we did in the 2016 election.” Wait a minute! Rosenstein said that there wasn’t any intrusion in the infrastructure in 2016. But I thought I heard… I’m going to have to double-check this.

I’m listening to this on the fly with a lot of things going on, so we have to allow for the remote possibility that I heard something incorrectly. But I think Rosenstein, when they announced those Russian indictments, said that the infrastructure of the 2000 election — which means the votes and the polling places — the Russians, nobody did anything because they couldn’t. Not one vote was changed. Not one election outcome was altered, and that’s what Christopher Wray said: “We haven’t seen any Russian involvement in voting infra…”

Well, you wouldn’t because there hasn’t been any voting yet, other than the early voting.

But he then said, “No, what we’re mostly concerned about here is the information warfare that the Russians are engaged in.”

“Yeah, and that’s what we’re looking at. We’re paying very close attention to the information warfare.”

Now, my antenna go up, folks, when I start hearing government people talk about monitoring “information warfare,” because there’s something that gets in their way, usually, and it’s called the First Amendment. But now you see how this is going to go.

So a request is going to be made for there to be monitoring of “information warfare” sites and so forth where ostensibly bad-acting Russians might be lurking about that we need to dispatch. Then Kirstjen Nielsen, who is the secretary of Homeland Security, wanted to answer the reporter’s question about the validity of when you pull the lever. She said (summarized), “What we’ve done, we’re in touch with all of our partners at the states, and we have encouraged them to have audit systems. Yeah, we’re gonna have an audit system!

Now, if we’re going to do that, why all this talk about Russians? Are the Russians the only ones that try to cheat? Don’t the Democrats try to engage…? Isn’t that what illegal immigration is really all about? Aren’t illegal immigrants being registered to vote in sanctuary cities? Aren’t people who are not citizens of this country being given driver’s licenses? Nobody is looking at that. No, everybody’s looking at the Russians! The Russians are under such a microscope, they couldn’t do anything if they wanted to — and yet they’re going to be blamed for everything if the Democrats lose.