RUSH: I have the audio sound bites here of the Campus Reform interviews of college students. One was at Columbia University. I think both of these are at Columbia. Cabot Phillips is the…

Anyway, here’s Cabot Phillips. This was Monday morning on the Campus Reform website asking students at Columbia about the First Amendment…

PHILLIPS: Can you name the five freedoms protected under the First Amendment?

WOMAN: No, I definitely can’t.

RUSH: “He’s taking that class in law school.” That must mean somebody’s taking a constitutional law class, but you’re supposed to learn what’s in the First Amendment long before you get to college. And this is… You know, this is no slouch college. This is Columbia. Here’s the second bite…

MAN #1: I think the lines are strong when you get offensive trying to end people’s, like, culture.

RUSH: Wait a minute! Wait, wait, wait, wait. Gotta back to… He asked a different question on this. If I don’t tell you what the question is, you’re not gonna know what they’re answering. Question: “Where do you think the line is when something should no longer be protected by the First Amendment?

MAN #1: I think the lines are strong when you get offensive trying to end people’s, like, culture.

WOMAN #1: I don’t think it’s fair for people to use the First Amendment as kind of like, you know, an excuse to say whatever they want. … I don’t have the right to hurt people.

PHILLIPS: You do, though.

WOMAN: Yeah. I guess. This is all very tricky.

RUSH: It’s not tricky! There’s nothing… This is one of the most easy-to-understand things in all of the Constitution! But did you hear? “I don’t… I don’t think that it’s fair for people to use the First Amendment as kind of like, you know, an excuse to say whatever they want. Like, you know, I don’t have the right to hurt people.” (chuckles) But you do! You have the right to offend them. You see, the thing is, nobody has to listen to you. Do you know how many people confuse that with the First Amendment? 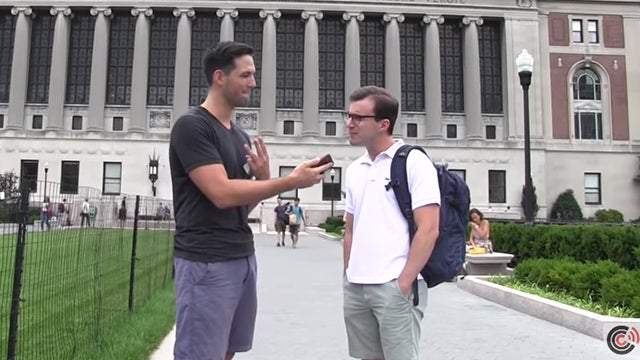 They think the right to free speech means that people have to listen to you, and they don’t! You have to earn that! “I think, like, the lines are strong when you go and get offensive, trying to end people’s, like, culture.” What the hell! You know what that come from. That comes direct from the multicultural curricula that this student has been subjected to probably since middle school. What in the world does the First Amendment, freedom of speech have to do with culture?

“Well, I think, like, the lines are strong when you get offensive, you know, trying to end like people’s, like, culture.” Who’s ending people’s culture? Except ours! Our culture is what’s under assault, and this babe’s not even in favor of free speech to defend it.