RUSH: Devin Nunes back on July 30th was in Spokane at a fundraiser — and, as usual, somebody was there secretly recording him. He was telling the truth! The Drive-Bys think it’s a scandal.

NUNES: So therein lies… So it’s like your classic Catch-22 situation where we were at a… This puts us in such a tough spot. If Sessions won’t un-recuse and Mueller won’t clear the president, we’re the only ones, which is really the danger. That’s why I keep — and thank you for saying it, by the way. I mean, we have to keep all these seats. We have to keep the majority. If we do not keep the majority, all of this goes away. 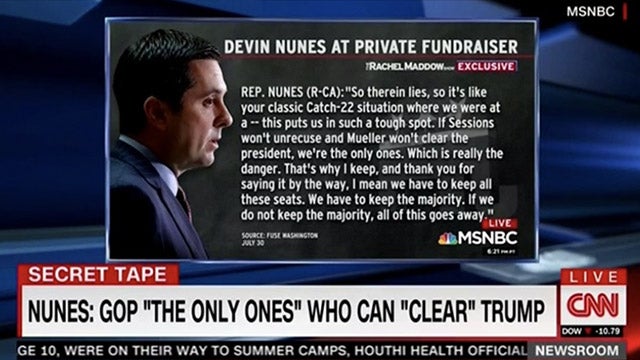 RUSH: That is nothing but fact. He’s simply talking to donors about the need to hold the House, that if the Republicans don’t hold the House, that it’s bye-bye Donald Trump. That’s his message, that we can’t protect Trump if we don’t hold the House. The Drive-Bys think it’s some kind of giant scandal. CNN’s been running this as though it’s secret audio of Devin Nunes betraying the state! It’s like the East Germans have found a citizen saying something they should say and they’re playing it for the rest of the nation to hear! All it is is Devin Nunes with the truth. Are you able to understand that, by the way? It sounds like it’s in a barrel. (interruption)

Okay, here’s the next bite…

RUSH: Well, I’m glad I have a transcript. That’s the exact kind of thing I didn’t understand a syllable of that, much less a word. But what he was essentially saying is, “[I]f they tell a lie often enough and they put it out there and they say, ‘Oh, we’re looking at the tweets,’ cause you know you got a mixed bag on the tweets, right? Like, sometimes you love the president’s tweets; sometimes we cringe on the president’s tweets. But they’re trying to make a political… 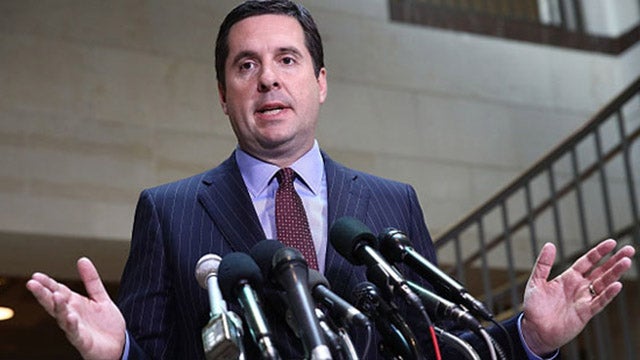 “This is all political as to why that story ran in the New York Times on the tweets.” He’s basically saying that if we don’t hold the House, we can’t defend the president. It’s the only way to defend Trump because he’s gonna be targeted if not impeached. They’re gonna just stop his administration with constant oversight, committee after committee subpoenaing documents and people, with Trump’s people being brought up to explain what they’re doing every day. And he’s right. There’s no scandal here.

RUSH: Right now CNN, they’re running a big breaking news story (summarized), “Devin Nunes overheard as fundraiser saying the GOP only ones who can protect Trump! GOP only ones who can clear Trump!” as though they’ve got some kind of giant scandal on their hands here. All Nunes is doing is telling a bunch of donors the truth about the importance and necessity of holding the House — and this, by the way, is how they criminalize political differences.

Make no mistake. The undertone of this CNN report is to somehow make Devin Nunes look like he’s doing something shady by seeking to maintain control of the House. As though that in and of itself borders on the near criminal or scandalous! As though Nunes ought to realize that his days of running a committee is over. Nunes ought to realize that the Republicans days of controlling the House are over — and his desire to maintain control? Why, that comes close to being a scandal.

Why else do this report?

There’s no other reason for it, the attempt to scandalize a Republican campaigning with donors discussing the importance of holding onto the House of Representatives.

RUSH: I played Devin Nunes. I want to play for you Adam Schiff, Pencil Neck Schiff. I alluded to this yesterday, and Cookie has given me the sound bites, and there are two of them here. Now, this is related to Dianne Feinstein. She has a spy. She’s got a ChiCom spy for 20 years on her staff, maybe more than one. The guy we know about is a driver, and he liaisons between the office and San Francisco with the ChiCom consulate in San Francisco.

Her husband, Richard Blum, does all kinds of business in China and has been aided and abetted by federal legislation his wife, DiFi’s been involved in. And of course when the FBI detects a spy, what do they do? They warn her. And then she’s able to say, “Yeah, five years ago I got rid of the spy. The spy only drove me, he never heard anything.”

They put spies in the Trump campaign. They didn’t warn Trump that they worried the Russians were spying. So they say Trump colluded but DiFi didn’t. Well, I want you to hear another example of collusion. There’s a Soviet — sorry — a Russian comedian — (interruption) different what? Well, Soviet communism, Putin is not really identified as a communist. He’s an oligarch, modern favorite word. But the Soviet Union ended. Now it’s Russia. That’s all I mean. But it’s the same thing. It’s KGB. KGB runs the country then. KGB runs the country now. Putin’s trying to put the Soviet Union back together, Soviet empire.

Anyway, a Soviet Russian oligarch comedian by the name of Andriy Parubiy called Pencil Neck — I’m sorry. The comedians are Vovan and Lexus, and they were impersonating the speaker of the Ukrainian parliament whose name is Andriy Parubiy. So they call Pencil Neck, trying to tell him that they are, he is the speaker of the Ukrainian parliament and that they have nude photos of Trump.

And Pencil Neck, he buys it, he’s excited, and what you’re gonna hear is Pencil Neck Schiff colluding with Russians, he thinks. It’s not. These are two comedians that are running a scam on him. Here’s the first bite.

SCHIFF: Okay. And what’s the nature of the kompromat?

RUSH: See. So now Putin knows of these pictures, he’s blackmailing Trump with nude photos. You notice Pencil Neck says, “Okay, and what’s the nature of the kompromat?” He’s using a Russian word for compromising material! He’s even trying to be one of these people! I don’t know how these comedians kept a straight face talking to Schiff. (laughing)

(imitating comedians) “Yes. There were there were pictures of naked Trump. Yes, of course Buzova shares those materials with Sobchak and Sobchak shares those materials with Putin because she’s goddaughter of Putin and Putin decided to press on Trump.” Pencil Neck’s sitting there. Can you imagine where his hands are when he’s listening to all this? Here’s the next bite.

VOVAN: We also know who was a mediator between Trump and Russian government who met with ex-advisor of Trump, Mr. Flynn. It was Russian singer, very famous singer —

RUSH: The most interesting thing is they used a special password before their meetings. They say it, “The weather is good on Deribasivska.”

VOVAN: “Weather is good on Deribasivska.” That is the name of a street in Odessa.

SCHIFF: A-and the code word is “Weather is good on ‘Zerabasta’?” (sic)

SCHIFF: Deribasivsk… Okay, and — and I’ll have my staff call up to get spellings and more details.

RUSH: That’s Adam Schiff, Pencil Neck falling for a scam. That’s back in April of 2017.