TAPPER: The president of the United States making a controversial visit to Pittsburgh today after the deadliest attack on Jews in American history. The president was greeted by hundreds of protesters singing —

TAPPER: This Land is Your Land, protesters with signs saying the president’s not welcome until he stopped what they perceive to be his assault on immigrations and refugees. The protests (dramatic pause) are not surprising.

RUSH: Of course not! Not to you. “The protests are not surprising.” What does immigration or refugees have to do with this event anyway. Why are these protesters there? Okay. So here’s Jake Tapper. (summarized) “The protests are not surprising, totally understandable! Nobody wanted Trump here. Trump is hated. Trump is reviled. Everybody wishes Trump would not have come, and after he did come, they wish he would just leave.” So now we go to the University of Pittsburgh Medical Center, President Trump, first lady, Ivanka Trump, Jared Kushner, walking through the halls to visit people wounded in the synagogue shooting.

FEMALE HOSPITAL WORKER 2: We love you!

THE PRESIDENT: Thank you all very much.

FEMALE HOSPITAL WORKER 2: Thank you, Mr. President. We love you. Thank you.

MALE HOSPITAL WORKER: Can I shake your hand, sir?

FEMALE HOSPITAL WORKER 2: Thanks so much.

THE PRESIDENT: You can. (comes to shake hands of staffers)

MALE HOSPITAL WORKER: Thank you so much.

THE PRESIDENT: Thank you so much.

But wait a minute! Jake Tapper said (paraphrased), “The protests are not surprising. Nobody wanted the president there,” and it’s not just Jake Tapper. Everybody in the Drive-By Media said, “Mr. President, you should not go. This is not your place. You have no business going. They don’t want you there! Forty-four thousand people signed a petition asking not to come.” Oh, wait, we’re not through. We stay at the University of Pittsburgh Medical Center, and now Melania, the first lady, and Ivanka Trump get some love, too… 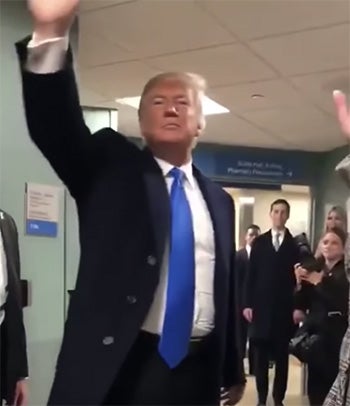 THE PRESIDENT: (teasing staffer as he shakes his hand) I don’t care where those hands have been.

THE PRESIDENT: Thank you all very much.

FEMALE HOSPITAL WORKER 1: Thanks for comin’ to Pittsburgh.

FEMALE HOSPITAL WORKER 2: You too. Thank you.

THE PRESIDENT: (looks at Jared) Nobody ever heard of you.

RUSH: That was a male employee looking at the Jared Kushner saying, “Nobody ever heard of you,” laughing that his wife was a bigger star. That’s fine. No problem. Everybody’s laughing about it. The point is, you’re not gonna see this anywhere. I mentioned to you in the opening hour of the program that this what happened. There are thousands of people already in line in Fort Myers awaiting a Trump rally there later tonight.

But nobody wants Donald Trump anywhere. “See, everybody hates Trump. Everybody despises Trump. Everybody regrets that they voted for Trump. Everybody can’t wait to vote for Democrats so that Trump can’t do anything. Everybody wants the Democrats back in power so they can start investigating Trump and get rid of him.” That’s your Drive-By Media. They don’t show you the reaction of real people. You will not see those videos. You’ll not hear that audio anywhere on the networks.