RUSH: Rick in Anchorage, Alaska. Great to have you, sir.

RUSH ARCHIVE: You think Virginia is the swamp and it’s all Never Trumpers there, and so Gillespie hires a bunch of Never Trumpers, but he barely squeaks by in the primary. Never Trumpers and hiring a bunch of swampsters to run your campaign with a bunch of people that don’t know how to get Republicans who voted for Trump, you’re not gonna win the governorship!

RUSH: Right. Now, your question, how in the world can anybody in a decent opposition political research department miss this Northam stuff?

RUSH: It’s mind-boggling, I know. The short answer is I don’t think you have very many conservative Republican consultants. I think they’re mostly moderates and anti-conservative. I think they’re known by losing with honor. I think, in their minds, it’s not win and win and win. It’s, “Hey, let’s win, but if we lose, let’s lose with honor so that we are not confused with who the people call the bigots and the racists in our party and the pro-life hicks and hayseeds.” And so there’s this built-in desire not to be seen as the typical Republican as described by media.

And one of the ways that manifests itself is not really going for the jugular when you win. I mean, how do you go out and find all this stuff about Northam and then not be accused of being a racist bigot and all this stuff? So I think it kind of roadblocks them in doing what’s necessary to win.

CALLER: Well, then we shouldn’t give money to their campaign if they’re not gonna try to win.

When you win and when you governor, the media is out for you, they’re trying to destroy you, they’re lying about you, they’re doing defamatory pieces on you and your family. When you’re losing and you’re in the minority, it’s a lot smoother ride. And you still get the perks. You still get the benefits because you are a Senator or you are a member of Congress and you have whatever goes along with that. And in the eyes of your constituents you’re still the guy they call when they need something done in the district or in the state.

I’m looking for something to explain this here for you, and bear with me while I find this. It’s a fascinating story. It’s a long, long, long story in Politico. And it is about the upstarts on the Democrat side who trying to take power away from Pelosi and her gang, and the way they are described will blow your mind. And I don’t know what Stack I put this in. While I find it, let’s go to back to the phones. Rick, keep your radio on and listen. I’ll find this story, because this is right up the alley of what — ah! Ah! Found it. Okay. Here it is. 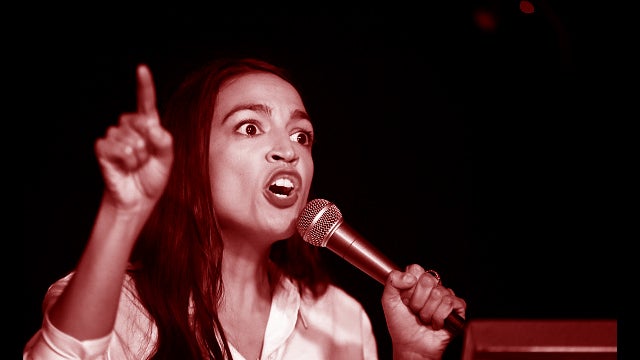 The story is by David Freedlander in The Politico. I think it’s their magazine. And the headline of the story: “There Is Going to Be a War Within the Party. We Are Going to Lean Into It.” Here’s the subhead: “The Justice Democrats helped get Alexandria Ocasio-Cortez elected. Who are they after next?” I want you to listen to the opening paragraph. Are you ready?

“Maybe you’ve heard the warning: The country is beset by a menace. A fringe conservative minority is holding Congress hostage, extracting radical policy concessions over the will of the majority. And it’s leading the nation to fiscal, environmental and moral ruin. Maybe you haven’t heard this part: These dangerous conservatives are Democrats.”

And then there is a quote from somebody named Saikat Chakrabarti: “I am talking about the radical conservatives in the Democratic Party.” Says Saikat Chakrabarti: “That’s who we need to counter. It’s the same across any number of issues—pay-as-you-go, free college, Medicare for all. These are all enormously popular in the party, but they don’t pass because of the radical conservatives who are holding the party hostage.”

This story is describing Nancy Pelosi, Steny Hoyer, John Lewis, the entire Democrat leadership, Chuck Schumer as “conservative” in order to characterize them as evil and rotten and old and tired and worn out and standing in the way. Not long ago, I approached this microphone one day and spoke to you about the branding, conservatism, conservative as a brand and how successfully the left has damaged it. And I suggested that maybe going forward we think of something else, like problem solvers or what have you.

And we got a call from an angry New York conservative who told me that he loved me and he’d been here for 30 years, but after he heard that I might as well be thrown in the swamp ’cause I have caved. If I don’t have the guts to say that we’re all conservatives here, then I’m not worth anything. Remember that call? He was livid. In what universe is Nancy Pelosi and Chuck Schumer conservative?

Well, right here. (tapping article) In the Ocasio-Cortez universe — and we now know that the Ocasio-Cortez group is called Justice Democrats, social justice warriors. Justice Democrats. They are an organization. So far, she is their only success story. They attempted to find a whole bunch of Cortezes to challenge Democrat Party lifetime officeholders like this guy Crowley, the Jurassic Park Democrat in the Pelosi leadership who had held that House seat in Queens for eons. Pelosi is fighting these people left and right behind the scenes, but Cortez is the only success story.

This person that I quoted, Saikat Chakrabarti, is chief of staff to Cortez. Twenty-nine, former activist… I’m sorry, that’s Cortez. Wait a minute. Journalism… Who is this being written about? “Chakrabarti is chief of staff to Alexandria Ocasio-Cortez, the closest thing to a new celebrity…” Well, anyway, the story is all about how their effort here is to basically Bernie Sanderize the Democrat Party, that Bernie’s too old to do it, that Bernie’s already proven he can’t win.

But Bernie’s ideas are what everybody needs, and Bernie’s ideas are what the Democrat Party needs to become, and Cortez and the Justice Democrats are the leaders. But that’s not the point. The point of this is that in Politico, in order to defame and stigmatize and criticize Chuck You Schumer and Pelosi, this story refers to them as “conservatives”! Not Democrats, not Republicans, just “conservatives.” So let me read this again now that you know what it’s saying.

“Maybe you’ve heard the warning: The country is beset by a menace. A fringe conservative minority is holding Congress hostage, extracting radical policy concessions over the will of the majority. And it’s leading the nation to fiscal, environmental and moral ruin. Maybe you haven’t heard this part: These dangerous conservatives are Democrats. ‘I am talking about the radical conservatives in the Democratic Party,’ said Saikat Chakrabarti. ‘That’s who we need to counter.'”

RUSH: Ho-ho-ho. Ho-ho. David Brooks, the so-called conservative at the New York Times, is mad. He says he felt like the Democrats did their best to slap him in the face last week over a lot of issues, not the least of which is Northam. This is classic.