Kamala Harris Is Descended from a Slave Owner

RUSH: Now, this is kind of a funny story. There’s a column here at PJ Media by Megan Fox. And the headline of this: “Reparations Time? Kamala Harris’ Father Says Family Descended from a Jamaican Slave Owner.” Now, this is perfect because this points out the sheer hypocrisy and I think the genuine mental deficiencies of people we’re told are brilliant on the left.

Kamala Harris made some joke — the subject of whether she’s black enough came up, as it always does in Democrat presidential politics. Is she black enough? And then some black civil rights leader — and I wish I could remember who — I don’t remember who it was. But said of Kamala Harris, she got a white husband. This ain’t flying. She can’t get away, she can’t run as an African-American, she can’t run as a black. She’s married to a white guy. That doesn’t work for us.

It’s like they had debates over whether Obama was black enough ’cause he’s half white and did Obama have slave blood? He didn’t have slave blood. Does Kamala Harris have slave blood? She’s from Jamaica. Well, in her defense of all this, she told some funny stories about how, yeah, I’m from Jamaica where they smoke a lot of weed. Well, her father got livid at her. Her father blew up at her for creating this negative stereotype of people from Jamaica and let her have it in public.

And he’s done it again! Because Kamala Harris is on record as backing some form of reparations for slavery. In a recent interview — and I — sorry. I guess I keep mispronouncing her name. Snerdley, have you heard her name is pronounced? Is it Kamala? Kamala Harris? Yeah, that’s what I thought. But last week people were correcting me. “No, no, no, it’s not Kamala. It’s Kamala.” But, whatever. I just thought you might have the definitive answer on this.

“In a recent interview, Harris agreed with the host’s suggestion that government reparations for black Americans were necessary to address past discrimination.” She later affirmed that support in a statement to the New York Times. “We have to be honest that people in this country do not start from the same place or have access to the same opportunities.”

“I think that we have got to address that again, it’s back to the inequities. America has a history of 200 years of slavery. We had Jim Crow. We had legal segregation in America for a very long time. The Voting Rights Act was only strong for 50 years and then they wiped it out with this United States Supreme Court in the Shelby decision, to the point that 22 states immediately thereafter put in place laws that one court found were crafted with surgical precision to have black people not be able to vote.

“So we’ve got to recognize … people aren’t starting out on the same base, in terms of their ability to succeed and so we have got to recognize that and give people a lift up. And, there are a number of ways to do it. Part of my initiative again around the LIFT Act is that same point — you lifting people up who are making less than a hundred thousand dollars a year. What I want to do about rent is the same thing. What we need to do around education and understanding disparities, what we need to do around HBCUs. But we have a history of racism in America.”

Her father, Donald J. Harris, wrote an extensive essay about the family’s heritage in Jamaica at Jamaican Global Online in January, claiming to be the descendant of a famed slave owner.

Her family! Her family is descendants of slave owners, not slaves! Kamala Harris’s family, her father writes an essay in January claiming, stating that his family’s heritage is the descendant of a famed slave owner in Jamaica! They have no history with slaves. Their descendancy is from slave owners. 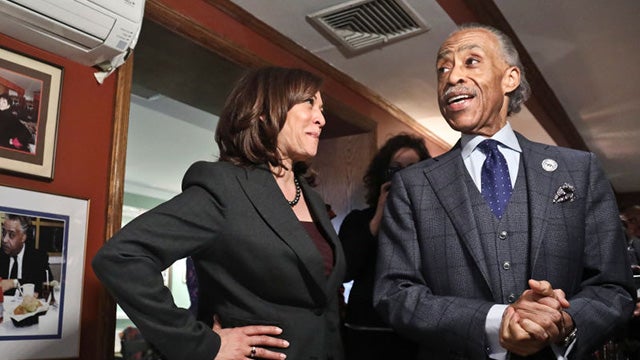 He wrote: “My roots go back, within my lifetime, to my paternal grandmother Miss Chrishy (née Christiana Brown, descendant of Hamilton Brown who is on record as plantation and slave owner and founder of Brown’s Town) and to my maternal grandmother Miss Iris (née Iris Finegan, farmer and educator, from Aenon Town and Inverness, ancestry unknown to me). The Harris name comes from my paternal grandfather Joseph Alexander Harris, land-owner and agricultural ‘produce’ exporter (mostly pimento or all-spice), who died in 1939.”

And he goes on to describe how his family, he and therefore his children, are descendants of slave owners, not of slaves. In other words, Kamala Harris’s ancestors presided over a real plantation. Her family, her ancestors owned people. Her father’s out getting this on the record ’cause he’s not crazy about some of things she’s out there saying. And now she wants to preside over the Democrat plantation.

The first time her father upbraided her, she made some flippant comment about a stereotype of Jamaicans is they like to sit around and puff on weed all the time. And that really irritated him. I think he’s a professor at Stanford, if I’m not mistaken. It really irritated him, and he wrote a piece castigating her. This was just in the past two or three weeks. I think she’s got a whole bunch of publicity about her that is not actually warranted. I don’t think she’s that sharp on her feet.

But, anyway, all this stuff is coming out now as the Democrat campaign unfolds. And it’s gonna continue to come out because there are so many of them seeking the nomination. And they’re gonna be in a race to the extreme left. Do you know how many hypocrites are running around in that party? I know hypocrisy never attaches to them. But, man, if we ever get a flood of reporting about their hypocrisy!