The Clinton Stadium Tour Bombs Out

RUSH: She and Bill are out on this tour. I told you it’s gonna bomb out, and it’s bombing out. They can barely give tickets away to this thing. The Bill and Hillary Clinton on tour, on stage. They got so disturbed by seeing the crowds that Trump was drawing for his rallies that they had to get in on that. They had to show that they had the same drawing power. They had to demonstrate that there were just as many excited people to hear them as there are people that want to hear Trump. 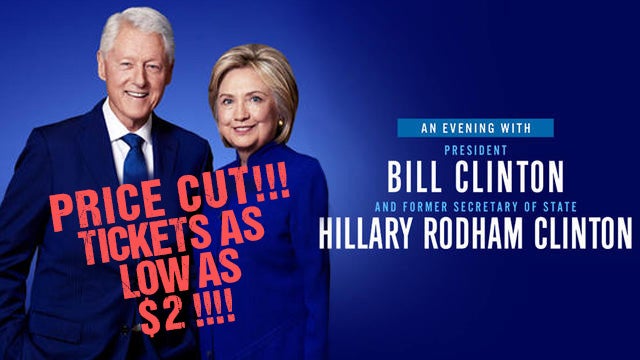 So they began this “arena” tour. They were charging up to $1,700, and nobody was willing to pay that. Tickets have now gone down below $50. They’re being given away. The house is being papered in many places. People are just not showing up. People don’t care. Bill Clinton, by the way, has decided to get into talk radio. Did you see that, Mr. Snerdley? (interruption) I’m sorry, no, he’s gonna do a podcast. I’m sorry. Podcasts are left-wing talk radio. So Clinton’s gonna do a podcast. I just saw the story before the program.

Let’s go to the audio sound bites. Start with this. I want to just remind you my of prediction here October 24th, 2018, right here on this program…

RUSH ARCHIVE: The Clintons announced — get this: The Clintons announced this nationwide stadium tour, 13 locations. Stadium tour! They’re gonna charge admission for people to come in and spend some time listening to Bill and Hillary reminisce and talk about politics. What if there isn’t a whole lot of interest in that? What if a lot of people aren’t yet buying tickets? … Who on our side’s worried about the Clintons? We’re laughing at ’em. A nationwide stadium tour with Bill and Hillary? (chuckling) Are they gonna have the bimbo eruption section where those babes get comped?

RUSH: Well, it’s almost gotten that point — and to show you how bad it is, Saturday night in Los Angeles during “An Evening with the Clintons…” And there was hardly anybody there, and the people that were there did not pay anywhere near full price. They’re thinking of shortening the whole tour. But Hillary is doing everything she can to sell tickets, to spark interest, and had this claim to make…

HILLARY: I’ve been telling candidates who come to see me, “You can run the best campaign, you can even become the nominee, and you can have the election stolen from you.”

HILLARY: That, my friends, has nothing to do with the economy, does it?

RUSH: So they have to keep slashing ticket prices. Nobody wants to see them. So now she’s trying to make news by… She’s out there actually proclaiming the election was stolen from her. They keep stepping in it. Rather than pulling back, rather than be presidential about things, they just can’t let it go. “You can do everything right…” She didn’t do everything right. I tell you, the long knives are out for Mrs. Clinton in the Democrat Party and have been for a long time, starting with Barack Hussein O.

Remember on Friday we had the latest installment of the book that the New York Times journalist Peter Baker has written about Obama to offer supplements, and we were told that Obama was like just livid, that Hillary was a horrible candidate, that she was soulless and that she was lazy. Here’s Hillary running around, “Yeah, you can run the best campaign,” you didn’t, “you can become the nominee,” except you stole that from Bernie Sanders, “and you can have the election stolen from you.”

She didn’t have the election stolen from her! The Mueller report was out. There was no collusion. She lost it fair and square because she was a lousy candidate. Ticket prices, by the way, have been slashed for the Bill and Hillary speaking tour. Seats in Los Angeles went for just $2. When they originally started this… (interruption) Two bucks! Two bucks? That doesn’t even handle the Ticketmaster handling fee.