RUSH: John Solomon at The Hill has this story today. Solomon says that there is a document that provides evidence that the FBI knew from the start that Christopher Steele, the author of the dossier, was on a mission to stop Trump from being elected. It was not about protecting America from Russian interference. It was not about making sure that Russia was spying on us or making sure it didn’t happen. 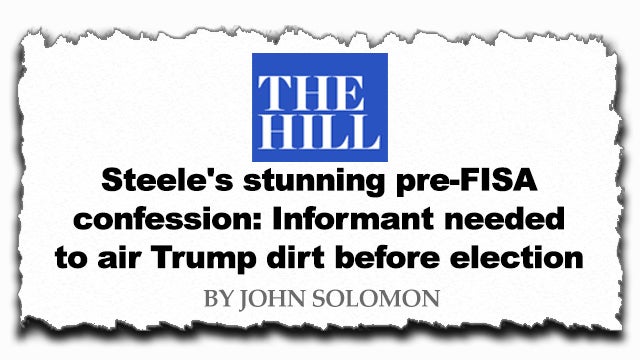 They knew, the FBI knew that Steele hated Trump, and Steele was demanding and putting pressure on his sources for the dossier that it had to be done by Election Day. And that’s the document that has been found. Steele’s confession happened 10 days before the FBI used Steele’s dossier to help get a FISA warrant to spy on Carter Page. The document is Deputy Assistant Secretary of State Kathleen Kavalec’s written account of her meeting with Steele in which Steele admitted his research was political, and he was facing an Election Day deadline to get it out to the public.