RUSH: More on the California Democrat convention and the booing of John Hickenlooper. The former governor of Colorado gets booed off the stage, practically, for simply saying heading in the direction of socialism is not… Not “heading in the direction.”  Socialism is not the answer.  The people in California didn’t want to hear that.  California’s Democrats… California, politically, is a socialist state now — and I say that in the meaning of the term ideologically.

Of course, that encompasses attitudinal and behavioral and everything else.  From all intents and purposes, California is a socialist state.  So let’s examine just some things.  Now, I know it’s easy to cherry-pick, and it’s easy to make generalizations, which I want to avoid doing.  I’m not gonna jump in and use some of this data as people who just want to create clicks or create outrageous reactions so people will talk about it do.  That’s not how these kinds of things are approached by me or on this program.

How many of you, wherever you live, drive by a homeless encampment and think, “We need to negotiate”?  What would you negotiate?  You’re only allowed to leave this tent city on these hours, and, if you do, you cannot steal people’s shopping carts? What would you negotiate with them?  Just the very idea that there will be negotiations — and they went on for months! Well, the negotiations ended last week when the city of Los Angeles agreed not to put a cap “on the total amount of property that homeless people can keep on skid row.”

Homeless people can have property.  How can anybody have property and be homeless?  “Property” being defined as real estate here.  We’re not… I mean, that’s what they’re talking about here.  The city of Los Angeles agreed not to put a cap “on the total amount of property that homeless people can keep on skid row.”  So the city of Los Angeles negotiated to extend a certain number of acres or blocks or whatever to the homeless, as in, “This is yours, guys — and gals.”

Uh… Pfft! (chuckles) There are more than guys and gals now. There are “its;” there are “theirs.” There are any number of personal pronouns accepted now. So the size we’re talking about is a 50-block area in downtown.  The city agreed not to put a cap “on the total amount of property that homeless people can keep on skid row.” Skid row is 50 blocks, and they can’t stop it from growing.  The city agreed that it will not stop it from expanding. 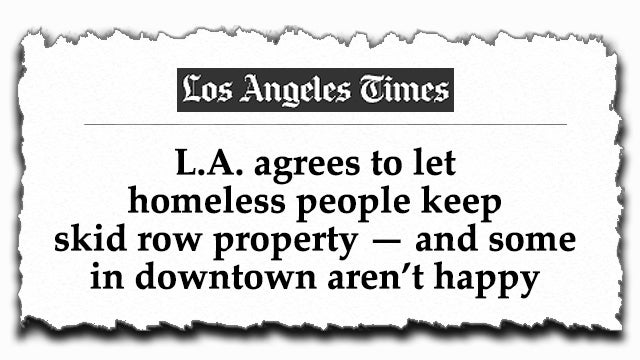 A fifty-block area in downtown LA!  Under the agreement, my friends, the city of Los Angeles can remove “large items” from the homeless like refrigerators and sofas if they’re blocking the sidewalk.  If the homeless put a refrigerator or a sofa on a sidewalk, the city of Los Angeles had to negotiate for the permission to come in and demand that the sofa or refrigerator on the sidewalk be moved.  In these negotiations — which were long and drawn out.

(laughing) I’m not making any of this up.  There’s more!  The city of Los Angeles “will also pay over $600,000 in damages, attorney’s fees and be and legal costs the homeless incurred during the negotiations.”  This is, in addition to the $31 million the city has already paid to clean up skid row — which, after the cleanup, is still a squalid mess.  The city of Los Angeles hung tough, but the homeless hung tougher.  The homeless already secured $31 million bucks paid to clean up skid row.  Now they demanded more, and they’re getting it.

It’s $600,000 in damages, attorney’s fees, and legal costs — and after all this, skid row is still skid row.  And the homeless are still homeless!  Now, the homeless lost the ability to hold on to rat-infested items, but they fought hard for it.  The homeless charged 600 grand to get rid of rat-infest items! Can you believe the city of Los Angeles paid a bunch of people over a half million dollars to take away rat-infested stuff, rather than just go in there and grab it for the benefit of everybody? The homeless demanded 600 grand and got it!  Or their lawyers did.

There isn’t a Republican as far as you can see. The homeless of Los Angeles and the Democrats who run Los Angeles have now smoked the peace pipe.  The homeless, after being paid $31 million plus $600,000, can continue in their homelessness in their own city within a city, skid row in downtown Los Angeles.  But they gave up quite a bit.  The sofas and refrigerators have to go, but only if they’re on the sidewalk.  You know, you people in LA, you might want to go up to Rio Linda and see how they handled this up there.  I just… (chuckles) You think that we’re making this up? Ladies and gentlemen, we are not making this up.

Now, a Los Angeles Police Department detective has been diagnosed with typhoid fever, and at least five other officers are showing symptoms, according to the Associated Press. All six officers work — where? — the Central Division station, the same place that has been fined for unsanitary working conditions.

So what is happening in skid row is now moving to the police department. Rather than homelessness being eradicated and fixed, the circumstances of homelessness are now moving and expanding and growing to the point they have now infested the Central Division station of the LAPD.

The LAPD says the division’s being disinfected. Officials are reviewing the state’s report that found health violations at the station. There are photos that show rats living voluminously and numerously within the walls of this LAPD station. They have eaten through the drywall. That’s how you can see them. And now infectious diseases are being — and we haven’t even begun to describe the impact of illegal immigration on this. 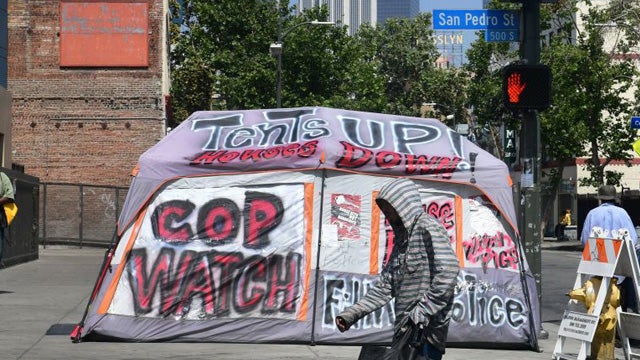 The Democrat Party has built this. Wherever you go in this country where Democrats run cities without any check, without any opposition — let’s look at Chicago and Baltimore, murder capitals, and Chicago had the busiest weekend for gun activity this past week, 50 incidents this past week in Chicago. And Jussie Smollett was not involved. Add him to the mix and it’s even worse.

Exactly right. The Democrats built this. The Democrats, who have enshrined and paid for squalor in downtown Los Angeles, are the same people that tell us that they are the ones to clean up the climate, to prevent the evils of climate change and global warming. They insist they are best suited to run the executive branch to run our lives. They’re best suited to ruin lives, and we have pictures to prove it.

Meanwhile, what has Trump done? He has pushed through tax and regulatory cuts to improve lives, actively engaged in trade negotiations with the ChiComs, and now the Mexicans are demanding to see Trump, and they want to see Trump fast. All of these appeals to the Mexicans to do something about illegal immigration, and only when it’s gonna cost them real money to build a wall do they act fast.

Yes, the price of Mexican beer may be so expensive that the left is jumping up now and demanding that this not happen. Mega urban centers in this country are becoming health hazards, and the people who present the health hazards are being negotiated with and paid. Many of these cities are called sanctuary cities, but they’re not just sanctuaries for millions of illegals. They are sanctuaries for rats, vermin, and disease.

They also are abortion capitals, which now include babies born alive. Large areas of American cities are indistinguishable from hellholes and all of them were promised to be what? Utopias. These failed utopias insist on the right to choose our president, the Constitution be damned.

They insist that the people not living in filth and despair are unfit to choose who should lead the country. They call us the deplorables. Forget life, liberty, pursuit of happiness. America’s once great cities now tout abortion, tyranny, and the pursuit of misery and the enshrinement of it.