RUSH: An absolutely wonderful column today from Victor Davis Hanson. It runs at the American Greatness website. And the headline of this column is “Our Bankrupt Nomenklatura.”

Here’s the subhead: “Take all the signature brand names that the Baby Boomers inherited from prior generations — Harvard, Yale, the New York Times, NPR, CNN, the Oscars, the NFL, the NBA, the FBI, the CIA, the Rockefeller and Ford foundations, and a host of others. And then ask whether they enhanced or diminished such inheritances?”

He has an overall point here. That the left’s self-appointed and self-anointed best and brightest are actually an endless parade of incompetence. Now, let me share with you some pull quotes. And this is going to set up the brief biographical sketches of these so-called wonderful, patriotic, committed American citizens from the military and from the intelligence community who are so upset over Donald Trump’s phone call to the president of Ukraine.

Why aren’t they upset about Trump-Russia collusion? Oh! That’s right. There wasn’t any. Where were all of these brilliant patriots with all of the evidence that Trump was a rotten guy during all that? This is so obviously a setup. But let me give you some pull quotes from Victor Davis Hanson’s piece today.

We are being led by credentialed mediocrities at every level of government. As I’ve said, we’re being government by a minority, folks, a numerical minority that thinks that it is intellectually superior to everybody. Think of it this way. Imagine the lazy, unmotivated, pampered, not-very-bright kids of those Hollywood stars who wanted to get into Harvard, Yale, Stanford, USC, imagine them graduating and becoming judges, becoming congressmen, senators, high-level government department heads.

Well, that’s exactly what we’ve got. A bunch of people who didn’t earn anything, a bunch of people who had life made for them by virtue of establishment connections. Here’s another great pull quote. And, folks, this is really so right on. It’s one of those things I wish I would have written. If I were a dishonest person, I would steal it and say that it’s my thought. But I’m not a dishonest person. Are you ready? 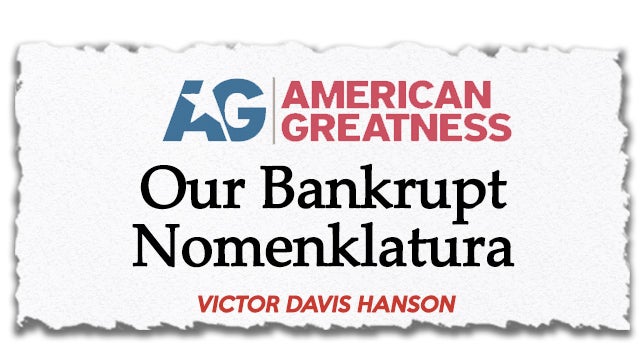 “The amount of elite energy spent replaying the embarrassing progressive 2016 loss and trying to abort the Trump presidency before the 2020 election, remember, was the product of our best and brightest, the top echelon of our law enforcement and intelligence communities, and our most esteemed political and media elite.”

“These people should not be considered by any stretch of the imagination our ‘establishment’ at least if there any positive sense left in the world. Yet they are typical, not aberrant of a habit of equating appearances, credentials, and demeanor of not necessarily talented people as proof of excellence and deserved authority.”

We call them the establishment, meaning they’re the best and brightest, they are the elites, they are the privileged few, but they are typical of equating appearances and labels and manner of behavior as qualifications for their superiority, not what they know, not what their experiences is, not their talent, not their capabilities.

Instead, they are typical of the quality of people who equate the way they look, their credentials, the labels and titles that they have and their polite manner, their sophisticated behavior. This is such a classically correct description of who these people are. And the reason it’s so right on the money is because that’s the primary reason these people claim to hate Trump.

The economy is the greatest example. Obama and all these other elites said, “There’s a new day, America. Our best days are behind us.  Your kids may not do better than you for the first time in history.  But that’s okay, because we really were not entitled to those greatness days in the past. We had cheated, we had lied, we had stolen.  So there’s a new era.  America is now in a period of decline.  It’s unavoidable, and we are the ones to manage it for you.” That was the Obama mantra.  That was the administration.

Economic growth? “It’ll be 1% max. Don’t even expect anything more.”  Trump comes along and says, “This is crazy.  We can have economic growth of 5% or 6% again.”  They howled!  They laughed.  They thought he was the biggest walking idiot on earth.  These people aspire to one thing: Maintaining their current position.  They don’t do it by doing good jobs.  They do it by sucking up.  They do it by maintaining credentials and labels and titles.  They do it by providing connections for others.  “Where you live, what school branded you…”

“[W]hat title, past and present, you can parlay, whom you know, and whom you married somehow have ended up far more important than what you actually have done. They remind one of played out ‘senators’ from the last generations of the Roman Empire. … The strange thing about James Comey was not his serial leaking to the press, his deception of a FISA court, his effort to subvert the Trump candidacy by peddling a false dossier and using informants, or even warping the Clinton email investigation.

“Rather, the rub was that Comey was not aberrant, but rather the apt expression of the Washington, D.C. culture of the FBI, at least as epitomized by his conniving and often deceitful associates such as James Baker, Andrew McCabe, Lisa Page, and Peter Strzok, who did not worry much about ruining the lives of other” people.  Let me share something with you: I remember all the way back to early 2000 when James Comey was the assistant AG to John Ashcroft, and I remember hearing James Comey was the epitome of morality.

James Comey was straight law and order.  You couldn’t corrupt him.  James Comey was the model for an American lawman.  That was his reputation.  That was his image.  It was not backed up by any accomplishment.  It was not backed up by any achievement.  Then the Comey that we all see isn’t the best and brightest of anything.  He’s corrupt!  He’s violating Justice Department rules by not charging Hillary Clinton when it’s not his job to do that.  It’s not his job to exonerate her, either, but he did that.

We all know why.

And then there’s this:  “We are learning that sports and film” movies, Hollywood “are industries of outspoken, moralistic scolds who as opportunists rail at supposed unwoke Americans as they do the bidding of fascistic Chinese authoritarians.” Can you say LeBron James?  Can you say the NBA?  Can you say that whole organization of Nike and Adidas? “Harvey Weinstein thrived in Hollywood for so long because he did on the sexual level what the Chinese did on a financial one — bet that almost every star, producer, and director would abdicate moral responsibility in return for power or money or” acceptance.

“Adam Schiff is a Harvard Law School graduate and, as he reminds us, for a time a federal attorney. But once he powered his way onto the national stage, it is hard to find any statement of his that has proved to be true. Were he not in Congress, but again a regional federal attorney he long ago would have been fired for unprofessionalism and perhaps illegal behavior as well. …  Graduating from today’s Yale or Harvard law school is not necessarily a sign of achievement, much less legal expertise.”

It’s a sign of connections.  It’s a sign of the road having been paved for you.  Anyway, it’s a great piece, and it adequately describes all these people we call the establishment, these people who think they are our superiors and betters. And yet they have so much power and they are so talented and they are so smart, and they can’t find a way in now almost three years to outsmart the biggest idiot who’s ever lived in Washington, Donald Trump, in their view.