The Lure of Socialism to Millennials

RUSH: Here’s Elizabeth in Columbus, Ohio, as we start on the phones.  Glad you called.  It’s great to have you with us.  Hello.

CALLER:  Hey, thanks, Rush.  I actually wanted to comment on your statistic about the Millennials supporting socialism and offer the opinion that I believe it’s because the bulk of them were in college or graduating at the market crash of 2007 and ’08 and they incorrectly conflated capitalism with the feeling they had of paying into the system through going to college, and then their reward of the high-paying job wasn’t there.  And really the problem was not capitalism but the abuses of the capitalist system. But the knee-jerk reaction by Millennials was to turn to the opposite extreme of socialism — which is funny, because if you want a system where you pay your dues and don’t get anything in return, socialism is that, in a nutshell.

RUSH:  I don’t think the socialism allure is as much economic as it is social with Millennials.  I think you have a point.  I think college age people at the time of the so-called financial crisis in 2008 might have been affected by that.  But they still had to be told by somebody, “This is happening capitalism’s unfair, because capitalism sucks, because capitalism,” blah, blah.  You cannot eliminate the role education is playing.  You cannot eliminate the role that economics professors are playing in this. 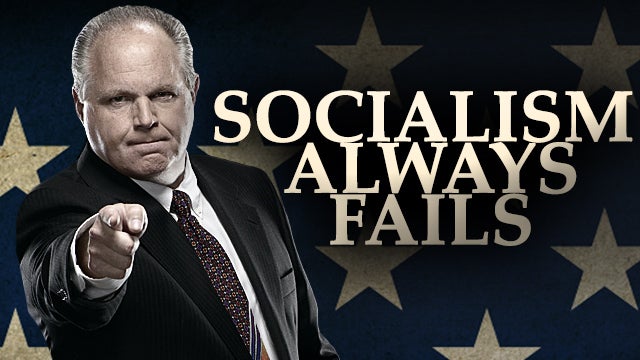 RUSH: There has to be a foundation built for stuff like this for — when the economic crisis of 2008 happens — it to be plugged into the foundation and have it take.

CALLER:  Well, and I… You know, as far as the economics being taught in college, I would agree that it is oversimplified and not based in our current world economic system.  But then when all the news about the crash came around, things we heard over and over were, “Bank bailouts” and “government bailouts,” and, you know, we kept hearing, “Where’s the bailout for Main Street?”

RUSH:  Well, and you know what?  They had a point!  That right there, what you just described was the Washington establishment — the New York-Washington-Boston corridor — looking out for itself.  It’s the same people trying to railroad Donald Trump, the same exact people.  I’m glad you called, Elizabeth.  I appreciate that.  I must go because I literally have no more time.

RUSH: You know, one of the things about Millennials and socialism and communism and so forth, is there’s all kinds of reasons for it. But do not discount the idea that it is (sniveling), “More fair, and there are no losers and there’s no hurt feelings and nobody laughs at anybody.” I’m not making this up. And if you talk to certain Millennials, they’ll get empathetic with it. They’ll say, “Well, there’s no better system for caring for the poor.” Now… (chuckles) The problem is that everybody ends up poor! Most everybody has very little in socialism. But whatever they have, it’s spread equally around.

RUSH: We have a lot of people that want to continue the discussion, people on hold here who want to talk about Millennials embracing socialism and communism, which is great. I think it’s long overdue that this be addressed.