Durham Zeroes in on Brennan

RUSH: Here is Mike in Hazleton, Pennsylvania. Great to have you, sir. Hello.

CALLER: Yes, sir, Rush. Pleasure to talk to you.

CALLER: My feeling is, nobody in Washington’s gonna get prosecuted on this entire affair because anybody that dares open their mouth is gonna suffer the same fate that Epstein did, and he had $500 million to protect him. And if I was being guarded by the Secret Service, I wouldn’t be too comfortable, either.

RUSH: Let me make sure I understand. The reason there will not be any prosecutions, you mean even by Barr and Durham?

CALLER: Barr and Durham my rear end. The guys smoke and that’s about it.

CALLER: That’s right. And Epstein had $500 million behind him.

RUSH: No, he had more than that. He had at least twice that.

CALLER: And, by the way, where are the tapes from his mansion and his Lolita island down there? They mysteriously disappeared.

RUSH: Yeah, I know what you mean. And you’re saying this because of who — isn’t it amazing that one guy has taken the fall for all of this? This poor, hapless Prince Andrew guy? His mom cancels his 60th birthday party. And the Clintons, who are up to their underwear in this stuff are just walking around breathing free and easy and not even concerned about it. I understand the way you’re thinking.

RUSH: Now, there’s a news report out, the New York Times is reporting that, according to a person briefed on the inquiry, U.S. attorney John Durham, who’s leading the investigation into how the Trump-Russia thing started, has requested John Brennan’s communication records, including emails, call logs, and other documents from the CIA. Brennan’s the former CIA director who led, at least visibly, led the entire coup to overturn Trump’s election. So Durham wants his phone records, has asked the CIA for all of his communications records. Durham’s team is said to be scrutinizing prior testimony given by Brennan.

Now, according to the New York Times, Durham “wants to learn what Mr. Brennan told other officials, including the former F.B.I. director James B. Comey, about his and the C.I.A.’s views of the dossier,” and other assertions about Trump and Russia. Which means he wants to find out who all was lying here. Who told who what? He’s looking for evidence that Comey and Brennan have been lying. Durham is trying to determine if Brennan privately contradicted his public comments. Meaning, he’s heard, he wouldn’t be looking for this if he hadn’t gotten some indication.

Brennan and Comey out publicly saying X, Y, and Z — Trump’s rotten, Trump’s a SOB, Trump’s this, Trump colluded with Russia. We’ve got four or five secret witnesses, we know this. He wants call records. He wants to hear what they were saying to themselves during all of this. He wants to find evidence of how they were strategizing to pull all this off. And my guess is he wants it because he knows it happened.

And so Durham has been examining the roles of all the intelligence agencies who put that assessment for Comey to present to Trump together. That would include the FBI, the CIA, and the NSA. The report concludes the Russians had meddled in the 2016 election and conspired to help Trump win the race. And Durham wants to find out who the hell asserted that, who said that, who included that, what’s the evidence for it, because there isn’t any, it didn’t happen. 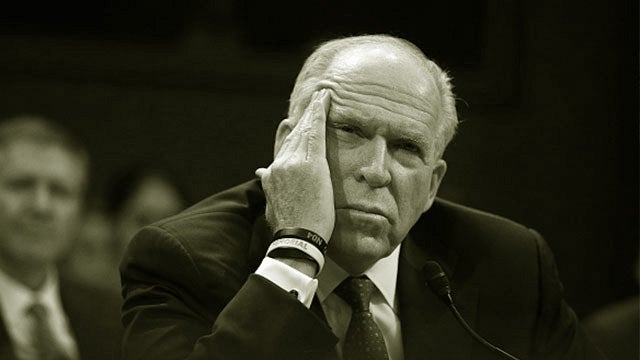 He wants to get to the bottom of who started this mess. And he’s asked the CIA for Brennan’s records. I don’t know if he’s gonna have any good fortune in coming up with those. Now, Bill Barr was on Fox last night. He had some fascinating things to say about all this.

RUSH: Here’s the Bill Barr sound bites.  He was on the Fox News Channel last night, and the question:  “We really learned a lot about the FISA abuse situation with the Horowitz report, the inspector general.  Do you believe that Durham’s investigation is broader scoped in terms of the intelligence agencies that are being looked at?”

MACCALLUM:  So would that include the CIA, NSA?

BARR:  It would include agencies that could have been involved in this. 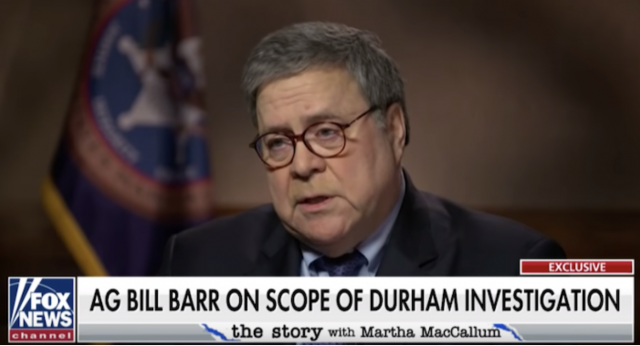 You go back and look at what these people were saying! “Trump is going down.  Trump ought to resign! Trump ought to be ashamed. Trump is an embarrassment to the morality of our country and the intelligence community. Trump is…”  This guy was filled with vitriol about Trump, and it was all lies. He was uttering all these predictions. “Trump’s going down! Trump’s finished, he just doesn’t know about it.”  Comey was doing the same rotgut stuff.  Man, oh, man, I would love to see these guys called out.

Don’t forget, we had this caller who doesn’t think any of this is gonna happen because before any of these people could actually testify, “they’ll be murdered like Epstein was.”  That’s his theory.  He thinks we’re never gonna learn diddly-squat about this.  I remain confident that this investigation is going to hit pay dirt and that we’re gonna find out.  I don’t know about punishments.

Now, what punishment, if any, there will be? (Snort!) Who knows?  Here’s the next bite  The question (summarized):  “Are you surprised that James Comey is so convinced himself that all of this was completely aboveboard? He came out and said there was no treason, there’s no spying at all, on [Trump].” None of this that Trump thinks happened to him, happened.  Does Comey saying all that stuff surprise you?

BARR:  The IG report and the recent letter from the FISA court, I think, pulls the rug out from under that analysis, and one of the things that I object to is the tack being taken by Comey, which is to suggest that people who are criticizing or trying to get to the bottom of the misconduct are somehow “attacking the FBI.”  I think that’s nonsense.

MACCALLUM:  Were you surprised that he seemed to give himself such distance from the entire operation?  Do you believe that?

BARR:  No.  They pulled the investigation up to the executive floors, and it was run and birddogged by a very small group of very high-level officials.  And the idea that this was seven layers below him, is simply not true.

RUSH:  All right.  Now, if Barr is willing to say all of that before the investigation’s even over with, then, folks, they know a lot — and this is big, I think. “[I]t was run and birddogged by a very small group of very high-level officials.  And the idea that this was seven layers below” Comey, and he wasn’t really aware of it all, “is simply not true.” A “small group of very high-level officials.”  This group is so small and very high level that it has to reach into the Oval Office.

Now, he didn’t say that, and I don’t want anybody call him up and say that that’s what I say he said. But these people doing what they were doing would not have been doing it without Obama being aware of it. And, of course, I think Obama was not just aware of it, but actively involved in it.  But I do think he has plausible deniability. Pfft. (sigh) I think if they’re willing to say all this, that they’re much further along, and Barr knows what happened.

They’re just putting it all together now.  Remember they are taking on a very powerful cabal here.  I mentioned (this must be two weeks ago now) that this is a major thing. This is a very, very big thing that Barr and Durham are doing, and they’re gonna have to make sure that every T is crossed, every I dotted, to use the cliche, because they’re taking a shot at some of the most powerful people in the world — and it’s not Comey, and it’s not Brennan.

It’s the people running them.  It’s the people they report to.  You don’t know their names and I don’t know their names, but that’s who they’re gunning for here.  Now, these may be the fall guys here before this is all said and done, but this is a huge thing. You want to talk about bravery and courage? What Barr and Durham are doing here is a big, big deal.  They’re not just going for some temporary FBI director and a temporary CIA director and this or that.

They’re going to get as high to the top of this as they can.  Otherwise there’s no reason to do it — and if they succeed and expose this, it is going to be earth-shattering.  I’ll guarantee you the people that are being gunned for in this investigation are still, at this moment, cock-certain nothing is gonna happen to them.  They are that powerful and in that much control of things.  So don’t give up on this.  This is big — bigger than you can possibly imagine, riskier than you can possibly imagine. 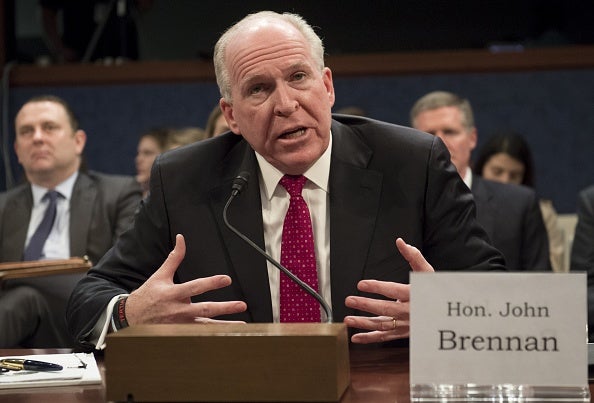 So back on May 23rd of 2017 during a House Intelligence Committee hearing, Trey Gowdy is talking to Brennan, CIA director for Obama, about Russian intervention, and the Steele dossier came up.

GOWDY: Do you know if the bureau ever relied on the Steele dossier as part of any court filings, applications, petitions, pleadings?

BRENNAN: I have no awareness.

GOWDY: Did the CIA rely on it?

BRENNAN: Because we — we didn’t — it wasn’t part of the corpus of intelligence, uh, information that we had. It was not in any way used as a basis for the intel community assessment that was done. Uh, it was —

RUSH: That’s a flat-out lie. It’s a flat-out lie. The dossier was all they had. And the dossier was used in the intelligence assessment presented to Trump on January 6th that Brennan was a part of. He’s lying under oath to the House Intelligence Committee right here. Now, I want to see the 6 a.m. raid at his house, like they did to Manafort, like they did to Roger Stone. Let’s see the 6 a.m. raid to his house to get his computers and all the other stuff.