Obama Working Behind the Scenes with Warren

RUSH: Remember last week when the news came out that Barack Obama was all over the place saying that it’s obvious that women are much better leaders than men? (paraphrased) “Men have gone south. Men have nothing to offer leadership-wise.” We all thought, “A-ha! There he goes clearing the way for Michelle (My Belle) Obama.” I also said maybe Fauxcahontas. It turns out, it is. He has been working behind the scenes with Warren.

RUSH: There’s a story in TheHill.com: “Obama Talks up [Fauxcahontas] Behind Closed Doors to Wealthy Donors.” So, what is going on here? Obama is not… If he’s making a move for Fauxcahontas, Obama is making it known that last week when he came out with this business that everybody knows women are much better leaders than men… (impression) “There isn’t any man leader out there worth their salt these days. It’s all women.” 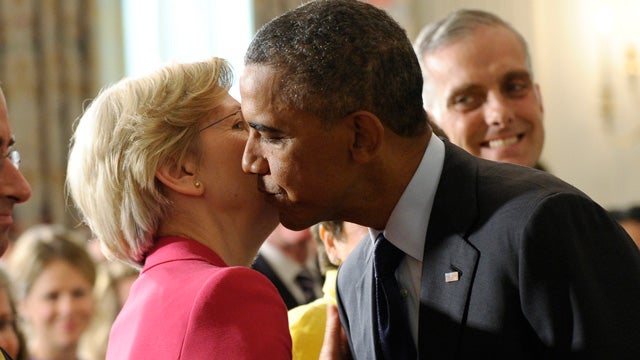 We assumed that he might be paving the way for Michelle (My Belle) Obama or whoever else is there. But Fauxcahontas, maybe on the outside Amy Klobuchar, or (a long shot) the Russian agent, Tulsi Gabbard. But everybody thinks that it’s Warren, and now it turns out to be true.

“Sen. Elizabeth Warren has spent her presidential campaign railing against the donor class, making it known she doesn’t want their help,” the hedge funders, the Wall Street guys, the people in wine caves.

“She has publicly bashed millionaires, has sworn off high-dollar fundraisers and has refused large checks from Democratic bundlers.” Well, not entirely. She’s taken them. She’s just letting them know that if they think this is gonna buy an ambassadorship somewhere, that it’s not gonna happen. However, “behind the scenes in recent months … Obama has gone to bat for [Fauxcahontas] when speaking to donors reluctant to support her…” Remember this all began when she just unleashed on Wall Street and all these Wall Street guys unleashed on her, and they immediately said that they wanted no part of her.

What is this? Is this a quiet way of Obama to undermine these wackos? Because that’s what he’s doing. But notice that he’s doing it in private. This had to leak out. Obama is not out in public extolling virtues of the Fauxcahontas. He’s doing it in private. It’s kind of like… You know, it’s like a back-room Operation Chaos, kind of like that. It’s like an Operation Chaos in back rooms that Obama is running to keep the Crazy Bernie, AOC Squad from wiling away with the number two position behind Biden.

But there’s no denying there’s a lot of momentum, and Mayor Pete is vastly far ahead in Iowa. So that’s why a lot of people are gunning for him now. So maybe… But now, does this mean that he’s also undermining Biden? Now, that’s an unknown answer. Is all of this behind-the-scenes extolling the virtues of Fauxcahontas to all these wealthy donors that don’t like her also an effort to undermine Biden, or is he trying to make Fauxcahontas the only possible vice presidential choice for Biden because it’s assumed that Biden can’t possibly end up serving two terms?

Obama is a radical leftist, but you would have a tough time finding verbal evidence of this. You’d have to look at Obama’s actual performance, his policies, the things that he actually did and dreamed of doing. That’s where you find the true radical leftist instinct of Obama, but not in his speeches and not in his public pronouncements, and I think the reason… Obama would like the radical left to take over this country as much as anybody.

But he knows it isn’t majority, and he knows it can’t happen with people like Cortez and Rashida Tlaib and Ilhan Omar as the faces of it. Remember, to these people, it’s the results that matter. It’s not the process that they get off on, although they enjoy the process. But the Democrat Party — for the longest time — has hidden who they really are. They’ve behind all kinds of masks and camouflage. It’s only recently that they have come out from behind all that stuff, and that happened when Obama was in the White House. They were feeling the glow of confidence.

And their world turned upside down when Hillary lost and so forth. So now they’re back to trying to make all these things happen behind the scenes. That’s why they’ll sabotage Alexandria Ocasio-Cortez and the rest of them because that’s not the way to achieve their goal, having people like that be the face of it and admitting what their objectives are. I don’t care what you think. We have not gotten to the point in the country yet where radical leftist — proudly shouted, proudly expressed radical-leftist — policies are gonna win a majority of voters.

We’re not there yet.

It’s why Cortez and the rest of them have to be moved out of the way.