RUSH: This afternoon in Davos, the World Economic Forum, Trump hosted a dinner with global CEOs, chief executive officers. After he spoke, Trump asked the CEOs in attendance at the dinner to introduce themselves and to say a few words about their companies.

And a billionaire from South Africa, African Rainbow Minerals, it’s a mining company, the founder, Patrice Motsepe – it’s a man, by the way. Have you heard about this guy that got canned, a columnist in Colorado, the guy got canned for writing that there are only two genders, male and female, XX and XY. He got canned. 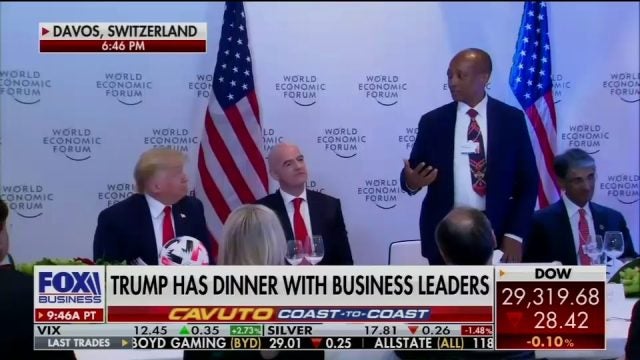 He got fired for failing to adequately understand the sensitivity of the transgender community. He lost his job because he wrote that there are only two genders. And I hate to tell anybody, but there are only two genders. The guy understands it, he understands why he got fired, and he knows this. And it amazes me how more people haven’t understood this up to now. You’ll see what I’m talking about when I get to it.

Anyway, here is Patrice Motsepe, who is the founder of the African Rainbow Minerals mining company after Trump asked all these CEOs at the dinner he hosted to stand up and introduce themselves and say a few things.

THE PRESIDENT: Thank you very much. That’s an honor. Thank you.

RUSH: An African CEO,  on the day after Martin Luther King Day praising Trump, praising America: Africa loves America. Africa loves Trump. Want both of you to do well.