The Slow Strangulation of the Biden Campaign

RUSH: I wanted to, as part of the analysis that I was digging deep into in the previous hour in which I believe that the Democrats actually are signaling they want this to end or they are signaling they know it’s going to… You know, the Pelosi sound bite. (angrily) “You can’t have a trial without witnesses. You can’t have an acquittal without witnesses!” Where was this before the trial began? And then Schiff’s out there echoing it. But I’m telling you, they don’t want witnesses. They don’t want the whistleblower. They don’t want Schiff being connected to this.

They don’t want that being demonstrated or shown, and I just have thought from the beginning of the week that this was going to end by tomorrow or sometime this weekend so these Democrat candidates can get out there and try to put brakes on Crazy Bernie in Iowa. So let’s take a look at Plugs because this whole trial here, this entire impeachment is featuring a side effect that I don’t think the Democrats calculated. I think they’re really off their game. 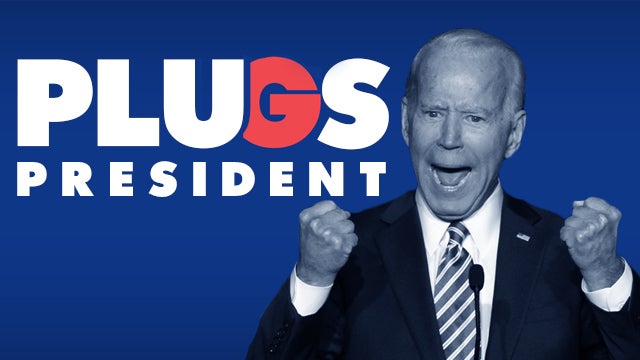 Plugs admitted that he’s an old guy, needs a younger and more vibrant VP! And when the Democrats’ most electable candidate is somebody that the former boss, Obama, will not endorse, well, then things can get dicey. Joe Biden has the most grueling year of his life ahead of him. He does not have the strongest donor base. Joe Biden, by the same token, cannot finance his own campaign.

Nobody is afraid of Joe Biden on a debate stage. Now, nobody knows how things are gonna play out, but this is not exactly the killer resume that you would want for somebody to go into battle and defeat Donald Trump, especially when fellow Democrats running for president can hammer old Joe on his family that magically became wealthy when old Joe was vice president.