The Presidential Medal of Freedom: It’s Just So Beautiful

RUSH: For those of you watching on the Dittocam, this will also be at RushLimbaugh.com. I want to show you a picture up close of the Presidential Medal of Freedom. That is it right there. And I couldn’t stop looking down at it the whole time that I’m wearing it. The clasps in the back, it’s just beautiful. 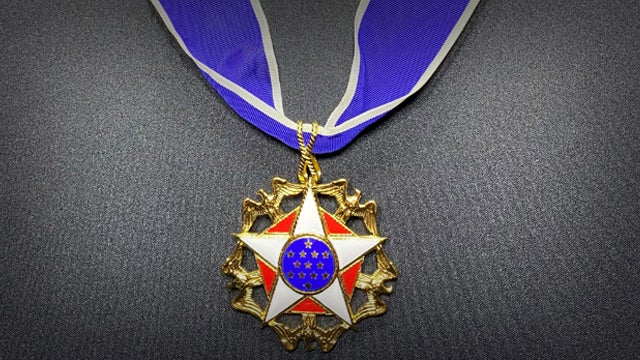 We’ve also got one more photo to show you that will also be at RushLimbaugh.com.

A black and white picture taken from below the second floor with the Medal of Freedom in color.

RUSH: This is Will in Rhinebeck, New York. Great to have you, sir, the EIB Network. Hello.

CALLER: Rush, thank you so much. It’s great to hear from you. Mega dittos, mega prayers. I’ve been listening to you for about 15 years. I just want to thank you because during the Obama years, you were the beacon of hope for all of us.

CALLER: My daughters and I are huge fans of the Rush Revere books. We’re actually reading through the First Patriots right now. It was such an honor to see you receive the Medal of Freedom. It just couldn’t have gone to a better person. 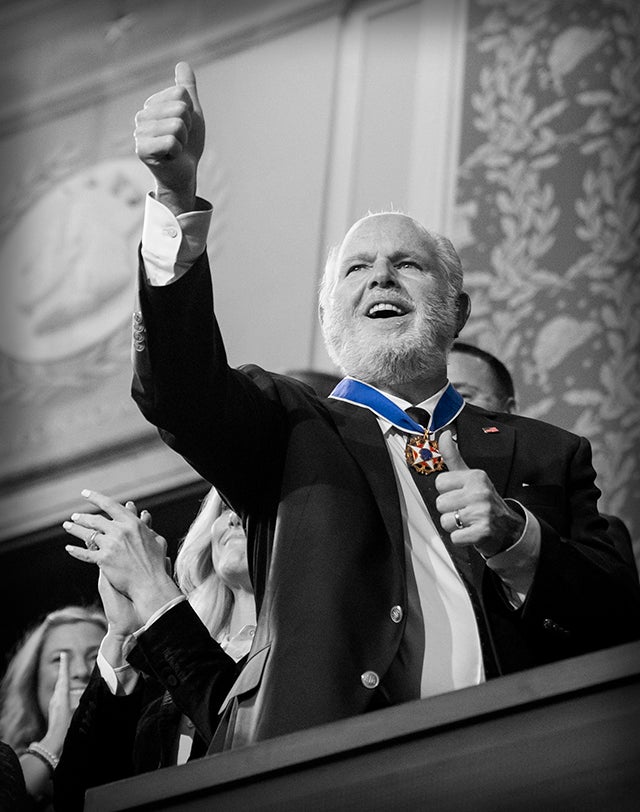 RUSH: Well, it was a once-in-a-lifetime thing. It’s so special and the president was not gonna let me miss it. He was not going to let me talk him or myself out of appearing at the House Chamber that night. Remember, folks, I knew I was gonna get the medal. The president had told me that it was gonna happen in a couple of weeks in the Oval Office — and for those of you just tuning in, let me remind you of something else.

There are details here that I can’t tell you that I so desperately want to because they describe and illustrate even further the kind of person Donald Trump is. But to do that I would have to go into details about my condition and my treatment, and I’m just not gonna do that. I’m not the only one that’s ever gone through this. A lot of you have, a lot of you are, and I vowed when this whole thing started, “I’m not gonna bleed on anybody with this.”

But someday, somehow, I’m gonna be able to tell the entire story, because there are elements of it that you’ll just laugh yourself silly. They’re all about Donald Trump refusing to hear “no,” no matter how polite, no matter how sincere, no matter how heartfelt, no way, not possible. As I say, it’s an aspect of his personality that these people, his political opponents haven’t the slightest idea. They have no way of understanding it.

He just will not be denied, and for all these times when you think people on his staff are getting away with sabotaging him like the whistleblower, Lieutenant Colonel Vindman? No. No. It may look like it in the moment, but they are going to… I don’t want to say “pay a price.” They’re gonna be outed for what they did. They’re not going to get away with it, is the point. He’s just indomitable and will not let anybody deny what he wants — and I don’t mean that as he’s oppressive and insensitive and doesn’t listen.

It’s, in fact, the exact opposite.