It’s Great to Be Back, Folks

The bottom line is they know it. They don’t have a candidate that can beat Trump and to watch the pretense in the Drive-By Media as though these people are serious — well, they are seriously contending, given their hopes and dreams, but the reality is that this is just — and I’m not trying to jinx anything, and I’m not trying to be falsely positive with things, but it’s juicy, folks. 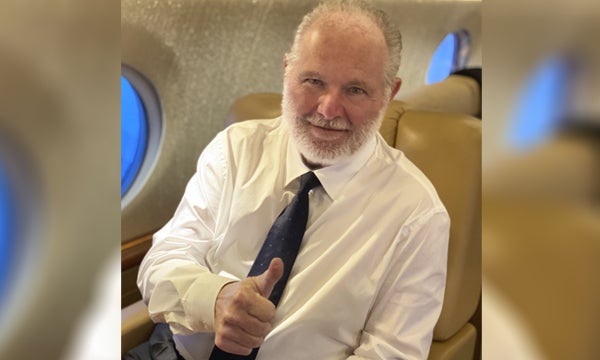 So last Friday I was here and I had the hacking cough. I sometimes missed the cough button, I’d aim for it and miss it, you’d hear the cough. I said, “Aw, geez, people are gonna get concerned.” I said, “It’s just a cold.” And it’s like every other cold I’ve ever had. I get ‘em once every three years or so, you can feel it coming on. I knew it. It was getting worse during the program. But I hung in there.

“You gotta go to the hospital.” So we went to the hospital. And it was a good thing ’cause it turned out to be flu. And I don’t even remember Saturday. I think I was just zonked, and then Sunday got out of there and then back here and roaring and ready to go. Unrelated to anything else going on. I still have some remnants of it, and you may — I don’t know. I may still sound a bit stuffed up. But, I mean, I feel a hundred percent better than I did here on Friday.

RUSH: Okay, folks, some I guess housekeeping stuff just to keep you up to speed. I will be here tomorrow and then off Thursday and Friday. Remember that I said when I announced this cancer diagnosis that I’m gonna be here as often as I can other than the days that I have to be away for treatment and if there’s any side effect or reaction to it. I have no idea yet. That is the next phase, and that’s what’s gonna be happening Thursday and Friday if I pass a couple of other tests. And we want to get going on that, obviously, as quickly as possible.

So, the thing to know is that I’m gonna do everything I can to be here as often as I can while not causing any setbacks. And right now I don’t know what kind of side effects there are gonna be. Everybody’s different with the way they react to these things. I’ve been an ox my whole life. I don’t react to things like most people do. And I have survived numerous attempts to inflict harm on myself with no pain whatsoever.

Excuse me. Remnants of the flu here. So, my attitude on this remains upbeat and positive. And, as I know as much in advance when I’m gonna be here or not, I’ll let you know. So Thursday and Friday I’ll be away and gone. But even on those days I’m gonna try to find a way to stay connected as best I can.