Rush Said It Best: Plugs Isn’t Up to the Job

TODD: There’s a reason… There is a reason that Team Biden does not want Biden taking questions even behind his militarized installation in Washington, D.C. — which, incidentally, is not normal — and that is because, as Rush told us, this guy can’t do exchanges. He so clearly rehearsed for those debates, and I mean this. I don’t have proof.

But we’ve all seen that footage of Biden walking past the Marine honor guards — I think they’re honor guards, Marine guards — saying, “Salute, salute Marines.” Remember that? Bizarre. It was like someone said into an earpiece, “Salute Marines,” and instead of saluting them, he spoke it back. I have a suspicion they gave him an earpiece in. That’s my suspicion.

All of the people have that suspicion. So the media is trying to focus on things like former Mayor Pete Buttigieg is now Secretary Pete Buttigieg. He wants to make transportation cool again. Cool again. Got it. Well, listen to Joe Biden, right? Listening to this. Biden announced the nomination of two women to be four-star generals during an event to commemorate International Women’s Day and he said this. 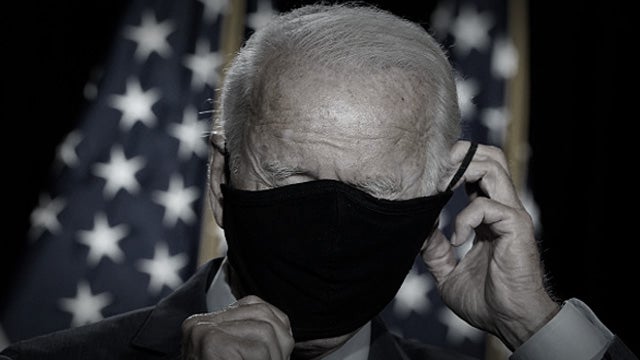 BIDEN: I want to thank the sec… the, uh… the, uh, former general. I keep calling him general. My… my, uh… The guy who runs that outfit over there. Uh, I want to make sure we thank the secretary for all that he’s done to try to implement what we just talked about and for recommending these two women for promotion.

TODD: “The guy who runs the outfit” being done on International Women’s Day, a gender that Biden’s people now say does not exist — and the man cannot remember… (laughs) He cannot remember the guy who runs “the outfit over there”? You mean one of the most important positions in your entire administration? So there’s that. Now, this just happened.

Legitimately, I say this with hurt in my heart. He looks lost. And someone tries to ask you a question. He looks just like a system. I don’t think he’s a journalist and listen to what happens here.

Biden’s handlers aggressively prevent the press from asking POTUS any questions after his brief remarks at a D.C. hardware store pic.twitter.com/kTXFIe9ERM 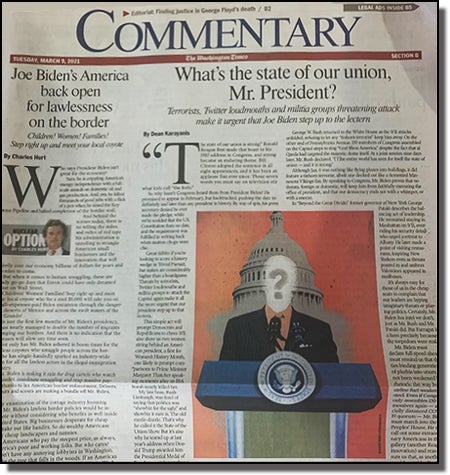 Rush called him Koko Jr. (laughing) Everybody has a nickname. I love the nicknames at EIB. He has a piece he wrote about Hidin’ Biden in the Washington Times that points out that other commanders-in-chief have, in fact, done State of the Union Addresses and more during times of war and chaos — and, as Rush might say, tumult.

But they have every excuse in the world to keep Biden from doing this. And this piece that Dean wrote, Koko Jr. in the Washington Times. You can find at RushLimbaugh.com in a bit. He goes through some presidents and the things that were going on, things like, you know, civil wars and things like World War II and a country in maybe even more chaos than it is now.

We talked about Rush using his freedom of speech.

But in a hardware store where, to me, it looks for all the world like Joe Citizen, one of us, just wants to ask Biden a question — or maybe just shake his hand — they leap in, and the cacophonous sound, that’s not on accident. They want to make sure that nothing Biden says or accidentally says is overheard. It’s our job to say, it’s not normal, and he’s not okay