Instant See, I Told You So: Biden Calls for Gun Control

JASON: What was it that Rush said last hour in one of our clips, that the Democrats tend to exploit the shooting tragedies? Well, that didn’t take long. Joe Biden, the president of the United States, just got done — you know, it’s a shame when you call Joe Biden the president, it’s really a shame that he’s the only guy that don’t know that. Nevertheless, he just spoke and called for the Senate to pass two gun control bills. Boy, didn’t see that one coming.

Hi, everybody, Jason Lewis, your guide today on this edition of remembering Rush. Glad to be here, as always. I do want to keep you up to date on the tragedy in Colorado. Of course, the suspect, 21-year-old Ahmad Al Issa we don’t know much about. We’re gonna try to find out but we’re not gonna jump to conclusions here on what happened until we get all the data.

Wouldn’t that be refreshing. Now, the House has passed a couple of promised gun control bills. They want to pack the Supreme Court so they can undo Heller and McDonald that protected your individual right to keep and bear arms. What’s really interesting is we’ve seen a surge in new gun owners. The National Instant Criminal Background Check System is showing an absolute surge in new gun buyers going back a couple of years now. Most — more — the biggest surge are women and minorities. Oh, my. Well, the more things change, the more they stay the same. Second hour underway.

JASON: Joe Biden spoke on this perpetrator — I should say more on gun control than the perpetrator — 21-year-old Ahmad Al Issa out of Boulder that destroyed a policeman among others at this grocery store, nothing but tragedy, and naturally Mr. Biden, the president, spoke about politics. Here’s what he said. 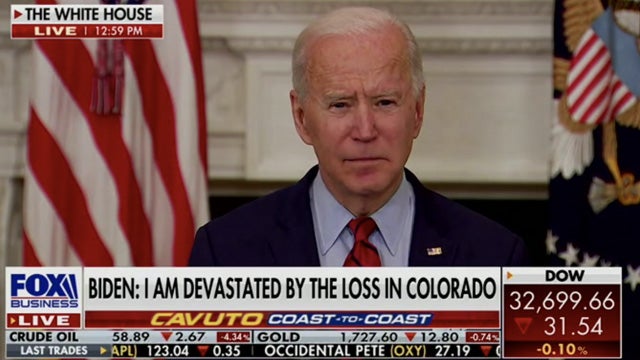 BIDEN: The Senate should immediately pass… Let me say it again: The United States Senate — I hope some are listening — should immediately pass the two House-passed bills that close loopholes in the background check system. This is not and should not be a partisan issue! This is an American issue. It will save lives, American lives, and we have to act. We should also ban assault weapons in the process.

JASON: You just made it a partisan issue. He just made it a partisan issue by suggesting, falsely, that a lack of gun control in Boulder, Colorado… The city’s been trying to ban all these sorts of weapons for years. You looked at the cities with the most stringent gun control — Washington, D.C., Chicago, Boulder, you name it. Why didn’t it stop it?

“Well, it’s because we haven’t stopped the flow of guns throughout the world.” So why hasn’t it stopped in Mexico? They’ve got much stricter gun control laws. Well, because prohibition doesn’t work. It didn’t work for alcohol, and it’s not gonna work to something as near and dear to the American psyche as self-defense, as self-defense — and yet, they just jump all over this stuff, jump all over the victims for political gain.

And, in the process, it is a total deflective move.