Rush Debates a Libertarian on the Politics of Medical Marijuana

TODD: One other lesson from the separate countries of Seattle, Portland, Los Angeles, and other liberal cities is legalizing pot and taxing it. Okay, you get the money. You know what you don’t get? You do not get a decrease in the activity of cartels. You know what they go do?

They go break into the stores that have to pay tax on the weed and then they use their sales cycles to sell it and graduate people up into heroin. Rush helped a young man in Florida learn that to political people, everything is political, even issues young people connect to liberty, like weed.

CALLER: I’m a Millennial. I’m 26 years old. I watch Fox News all the time. Every time it’s an issue about social issues it’s like, you know, the conservatives, all these talking heads, “Oh, medical marijuana,” why is it such an issue? It’s more than just medical marijuana.

RUSH: I’m gonna answer your question for you. In the first place Matt, learn something, please. Everything is political to political people.

To people in politics, that’s politics. There’s a political reason why you showed up. Therefore there is a political appeal they think will resonate with you. Now, to you, if you’re being honest, you just want the freedom and liberty. If you need some marijuana for a medical reason, or whatever, you should be able to get it. It’s your life, it’s your body, you’re not hurting anybody.

RUSH: Okay, I understand. What about if you liked heroin instead of marijuana, would you have the same attitude about it?

CALLER: That becomes debate, and there’s debate. I don’t agree with it, but I believe someone should be at liberty to make their own choice.

RUSH: And that’s why you’re a Libertarian?

CALLER: Liberty is to make your own choice without government intervention.

RUSH: Right. I understand that. It’s an age-old argument, and it often delves into the role of public morality. The most common refute or refutation to your argument would be, “But it’s not just affecting you, Matt. By your using this drug, it’s affecting your employer, if you have one, because it’s gonna impact your performance.” 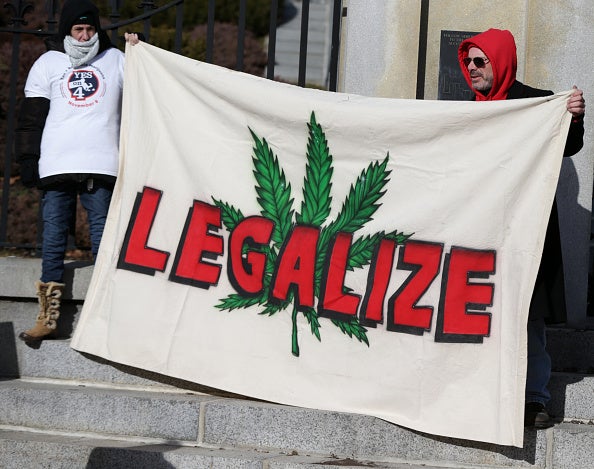 This is what they say. It’s gonna impact your family. You don’t do anything in a vacuum. Nobody does. And whereas you may think it’s a totally personal choice that has no effect on anybody else, public morality says otherwise. But regardless, whether that is something you believe or not, if government realizes that there’s money in it via regulation, then they’ll turn it as political as necessary to get the money out of it.

And if they see that the primary constituency group that wants this is young people, then, bammo, they’re gonna really politicize that. They’re gonna turn it into an issue to make you a voter. If they determine that’s all you care about, then there’s gonna be a political party that comes along to make you think that’s all they care about, you getting your marijuana, and they’ll promise you, and they’ll do whatever they can to get you to turn out and vote.

Everything becomes political in that regard.

The bottom line is that people who sell marijuana legally, the government’s gonna make more money off of them in taxes than they’re gonna make selling the product to customers. Drug-war-era law gives the government the right to tax the profits of the sale of it at 80 to 90%.

They’re looking at it as a source of new revenue because we’re out of money, and they’re gonna exploit you and everybody like you as best they can. So now we’re not talking about just medical marijuana in these states that’s on the ballot.

This is recreational, because the federal government, the IRS, is looking at a tax rate of 80 to 90% on it, on the profits in legal marijuana stores. Follow the money, Matt, particularly in politics, and practically every question you have will be answered.

TODD: Follow the money and follow the liberty. So we’re keeping track. New York state now wants to legalized pot. It’s been legalized in the separate country of Washington state. The same areas that are championing a covid passport — yes, a covid passport in New York in order to enter a store — want guns taken away.

They want us tracked in our cars and blackmail pricing applied to our movement. You notice a commonality with the modern Democrats? That which builds up life or sustains freedom is to be attacked; that which does the opposite, is to be fostered.