Kamala’s Cackle Is the Arkansas Broadbeam of 2021

TODD: The Supreme Court has issued a ruling that Hillary Clinton need not bother herself with testimony about her email server, that a Q&A in writing from her attorneys suffices. So why should she have to bother with follow-up questions to clarify the fact that she’s blatantly lying about why she set this up? Let me try to make this complex issue really simple, because people are tuning in all the time to Rush’s show.

Even as, you know, late as the last 60 days people are turning to this program for guidance. Hillary used a private email server so that she didn’t have to reply to demands for her emails. That’s it. She was hiding them. She wanted to be able to conduct pay-for-play from this server in her bathroom. So here’s one way to explain it to your friends. Try this at work. Your boss comes and says, “Hey, do you have an email record of that conversation with this vendor? We’re having a problem.”

“No.” “What?” No. I BleachBit’d it. It’s erased. It’s been BleachBit’d. It’s erased.” Try it. Try it with the IRS. “Do you have a record for this tax deduction?” “I don’t recall.” Just try it. This is the way to communicate with our friends how separate the system is. The importance of being Hillary Clinton, is you get to do these things. Supreme Court has said, “Yeah, why bother? Why bother doing this?”

You know, there is almost an eerie inheritance of (laughing) one of Hillary’s techniques. She’s asked a tough question and responds, “Ha-ha-ha-ha-ha-ha-ha-ha-ha-ha-ha-ha!” The laughter. Kamala Harris (who may well be running things since Joe Biden’s dementia’s not) thinks that school closers are hilarious. Now, listen to this, and you tell me: Where did Kamala learn to cackle like this?

HARRIS: More parents are seeing the value of (cackling) educators where they had… (sputtering cackle) …have… (cackling) and say, “We not payin’ ’em nearly enough!” (cackling)

TODD: Ha-ha! Ha-haaa! You know, I know a lot of parents are saying that now that they’re discovering that they are kids have been taught that there’s no such thing as boys and girls, that America is a racist country, that their parents stole everything they have (if they’re white). It’s hilarious. I know their parents haven’t been to school, but, man, “Hey, can you double my property taxes to pay for the schools?” It’s funny.

But the laughter. Was it passed on in sort of a weird kind of ceremony somewhere in Central Park, outside the Clinton Foundation? Oh, wait. Do they have the Central Park offices anymore since the business model dried up? Was that where Hillary handed this over? I so dearly remember Rush imitating Bill Clinton talking to Rush. And you probably remember when Rush did this. He diagnosed Hillary Clinton’s cackle as the sound of the Arkansas Broadbeam.

RUSH: “There’s a couple people I watch regularly who drive me away because they begin every sentence with “y’know.” By the way, that’s a pet peeve of mine. I’m not gonna name names. It becomes a habit after a while. People are thinking what they want to say and they say, “y’know,” “and then, y’know,” and so I studiously try to avoid it, but Hillary’s one of these people “and y’know, and y’know, ha-ha-ha-ha,” then Broadbeam cackle-laugh, and then “y’know” again.

HILLARY: Well, we don’t have to buy my book and they can turn off the radio when they hear me talking. (cackling) I’m not going anywhere! I have the experience, I have the insight, I have the scars that I think, uh, y’know, give me not only the right, but the responsibility to speak out.

RUSH: (cackling) That sound is made by the Arkansas Broadbeam. It’s a species that is native to Arkansas. That cackle, we first heard it and it sounded like just like Hillary laughing here, so that’s what it is.

TODD: (laughing) Oh, it’s perfect. I also look at this, like, weird, you know, dark ceremony of passing things on. And is it possible for the left to find likable women? Now, I do try to focus on policies, but the policies are the people, in the case of the left. You now have Nancy Pelosi and Kamala Harris being sued for banning the annual prayer event at the Capitol. Never misunderstand this. 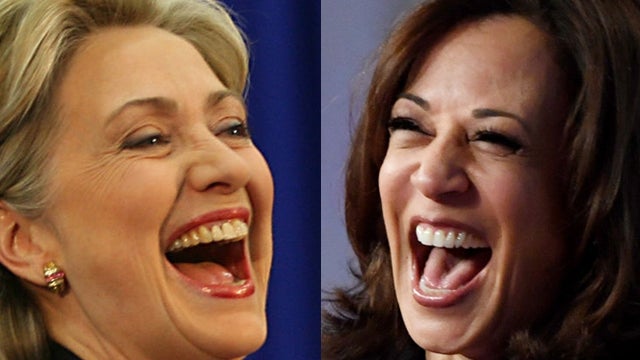 They fully intend to be the party that’s against God. It’s like the final divide-and-conquer. Oh, wait. It is like the final divide-and-conquer. I thought that was gonna be funny and it dropped out of my mouth and I looked at it and said, “It’s not all that funny.” But wait, wait, wait. Look at this. Ok, this is the power of the Team EIB. (laughing) We were just speaking of the Maha imitating Slick Willie, look what team EIB just pulled from the Limbaugh Museum.

TODD: Later in the show, they found a moment where Rush interviews Bill Clinton acting as Bill Clinton, and — you won’t believe this — Bill Clinton once approached Rush in a New York City eatery. We’ll get to that. Now, because there are always new people listening to Rush’s program joining even the past few months, many people have no idea of the true story of Hillary’s email server, the way we began this segment, and they actually believe Donald Trump went and asked the Russians to hack her. Here’s Rush explaining it.

RUSH: Let’s reset the stage. This happened in the summer of 2016. Hillary’s email server had 60,000 emails. And she turned over 30,000 and then said the others were not important. They had to do with her daughter’s wedding registry and yoga lessons and all that, and she deleted them. And she used BleachBit and then all this other stuff. And people didn’t believe that. And besides, wherever there are emails, there are backups, there are copies.

Somewhere Hillary Clinton’s emails still are, they exist somewhere. She can BleachBit her server all she wants, but her server was not air gapped, meaning it was connected to the internet. So they’re somewhere. And so the media was going nuts about it. A lot of people were raising questions about where Hillary’s missing emails were. And Trump thought it was ridiculous because somebody had ’em. Somebody knows where they are.

So Trump starts mocking all of this so-called concern. And he says, “Russia? Russia? If you’re listening, so many people are trying to find Hillary’s emails,” he joked, because the real point, nobody wanted to find ’em. They’re trying to cover ’em up. So Trump says, “Russia, if you’re listening, maybe you can help find them. And if you do, you might want to let the U.S. media know.” When I saw that, I started laughing myself silly because that is a humor technique that I have employed religiously, and it’s gotten me in trouble.

Leftists do not get it. I can’t tell you the number of times that I have been misunderstood and then labeled something horrible because of a similar kind of joke. They have no sense of humor. They don’t laugh about anything anyway. When you’re mocking them and laughing at them, A, that’s not tolerable, that isn’t permissible. And here is John Brennan, this guy ran the CIA. And he wants us to believe that he doesn’t understand that this is a joke? He wants us to believe that Donald Trump is actually suborning Russia investigating Hillary Clinton, that he was actually inviting Vladimir Putin to spy on Hillary Clinton. Now, what kind of stupid is that?

TODD: Ask yourself this: If you are an attorney and a conservative attorney and an America-loving attorney, what would be the harm next time you’re defending a client and the client doesn’t want to testify, right, and they want to pull a Hillary Clinton or they’re in an email situation like this…? What would be the harm with just saying, “Ah, we plead Hillary; we plead the Hillary defense”? The defense is, “Ha-ha-ha-ha-ha-ha!” Just try that.