TODD: This thing with Fauci and Rand Paul. Let’s get into some of the sounds of that. Nicholas Wade is — and it’s notable that this is not in the New York Times, that this is instead on Medium.com, and you can find the link to this, I’m sure, at RushLimbaugh.com. Nicholas Wade, former New York Times science writer (and, I understand, he was a former staffer at the journal Nature), writes, “From June 2014 to May 2019 EcoHealth Alliance had a grant from NIAID, part of the National Institutes of Health, to do gain-of-function research with coronaviruses at the Wuhan Institute of Virology.” 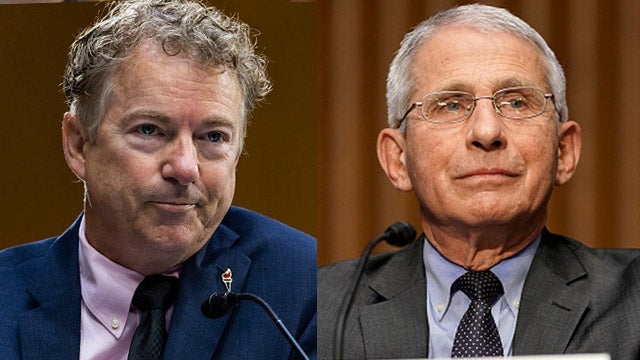 You know that Rand Paul, Senator Paul, was talking to “the Fauch” about this. Before we get to the Fauch — and the fact that he continued to fall back on a lawyer trick, which is a very carefully worded statement. Make sure that you don’t fall afoul of perjury while you are lying, is the way I see it. Let’s present the following thought scenario. We’re in a meeting room in Washington, D.C. The best and the brightest are sitting around the table.

And the best and the brightest are the people, experts at infectious diseases and biological warfare and chemical warfare. They’re presenting the work of the Chinese Communist Party to commit to total war, which would include things like that biological and chemical warfare and using tools like domestic terror groups (laughing) in the United States in order to destroy the United States of America.

And they’re committed to this path of understanding biological warfare better than any nation, and they’re in this meeting group in a meeting room in Washington, D.C. And someone says, “You know, I think we should work with them.” In the real world, if you were to say, “I think we should partner with the Chinese Communist Party,” a lot of people’d say, “Huh! What are you, an NBA player?”

So yesterday in D.C., during a Senate hearing, Tony Fauci testified. During the Q&A, Senator Rand Paul says, “For years, Dr. Ralph Baric, a virologist in the U.S., has been collaborating with Dr. Shi Zhengli of the Wuhan Virology Institute sharing his discoveries about how to create super viruses. This gain-of-function research has been funded by the NIH.” Fauci and Paul then continue with this…

PAUL: Government scientists like yourself who favor gain-of-function research —

FAUCI: The Chinese are saying things that are not correct. The NIH and NIAAD categorically has not funded gain-of-function research to be conducted in the Wuhan Institute. I fully agree that you should investigate where the virus came from. But, again, we have not funded gain-of-function research on this virus in the Wuhan Institute of Virology, no matter how many times you say it —

TODD: And, oddly, a former staff member of the journal Nature, a former writer for the New York Times science section, Nicholas Wade, says, “From June 2014 to May 2019 EcoHealth Alliance had a grant from NIAID, part of the National Institutes of Health, to do gain-of-function research with coronaviruses at the Wuhan Institute of Virology.”

I believe Nicholas Wade, because I’ve learned I can’t believe Tony “the Fauch” Fauci, a man who has America in a selective, medically useless, deadly — but give him credit, very politically advantageous — lockdown of schoolchildren, churches, and small businesses while letting abortion clinics and big businesses run crazy wild, give him his due benefit, the technocrats have done really well under this lockdown. It’s been great for them. You have this from the Epoch Times.

“U.S. Grant to Wuhan Lab to Enhance Bat-Based Coronaviruses Was Never Scrutinized by HHS Review Board: NIH.” Tony Fauci has a lot to answer for including why did there ever exist a reason to give the Communist Party of China any respect, let alone money, to interact on the basis of any form of gain of function. Gain of function means making something more deadly.

Rand Paul was talking about gain of function being able to institute a coronavirus that would kill 15% of the people it comes in contact with, not 23% or 13%. Just try this in the real world. Go to your boss and say, “I have learned that our chief competitor that is trying to destroy us in the marketplace has a plan to destroy us in the marketplace.

“I thought we might go and meet with them to help maybe just send them a check to help fund their destruction of us in the marketplace.” People would think you’re having a stroke. Now, Rush was quite understandably taken aback to hear Fauci say that he never set himself up as the end-all, be-all decision-maker of that medically useless, politically targeted lockdown of churches, schools, and small businesses. That, as Rush predicted, would flatten the U.S. economy.

RUSH: I mentioned earlier that Rand Paul got into it a little bit with Dr. Fauci at this hearing today. This is the… Let’s see. What is the name of this committee? It’s the Senate Health Committee. Well, it’s the HELP Committee — Health, Education, Labor, and Pontifications, I guess. I don’t know what the name of it is. Doesn’t matter. Now, Dr. Fauci has already testified at the time Rand Paul speaks. Dire circumstances await us if we don’t follow Dr. Fauci’s guidelines. 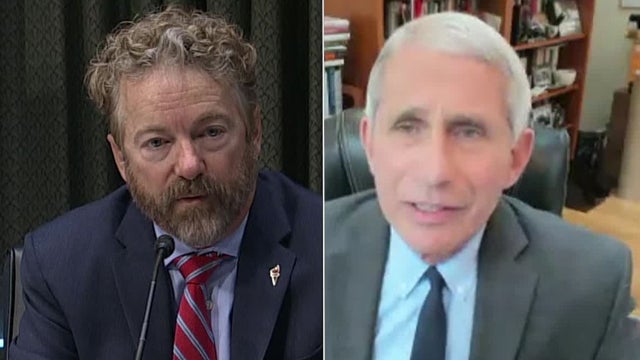 Now, here is Dr. Rand Paul speaking with Dr. Fauci on the subject of the infallibility of Dr. Fauci.

PAUL: In rural states, we never really reached any sort of pandemic levels in Kentucky and other states. We have less deaths in Kentucky than we have in an average flu season. It’s not to say this isn’t deadly, but really, outside of New England, we’ve had a relatively benign course for this virus nationwide. And I think the one-size-fits-all that we’re gonna have national strategy and nobody’s gonna go to school is kind of ridiculous.

So I think we ought to have a little bit of humility in our belief that we know what’s best for the economy. And as much as I respect you, Dr. Fauci, I don’t think you’re the end all. We can listen to your advice, but there are people the other side saying there’s not going to be a surge and that we can safely open the economy, and I think it’s a huge mistake if we don’t open the schools in the fall.

RUSH: So Dr. Fauci, I respect you, of course, everybody has to say that, but I don’t think you are the end all, Dr. Fauci. And Rand Paul’s exactly right, by the way, in his statistical data presentation here. Here’s Dr. Fauci responding to Rand Paul claiming that he, Dr. Fauci, is not infallible.

FAUCI: Mr. Chairman, could I respond to that even though there are only 32 seconds left? I have never made myself out to be the end all and only voice of this. I’m a scientist, a physician, and a public health official. I give advice according to the best scientific evidence. There are a number of other people who come into that and give advice that are more related to the things that you spoke about, the need to get the country back open again economically. I don’t give advice about economic things.

FAUCI: I don’t give advice about anything other than the public health. So I wanted to respond to that.

RUSH: He doesn’t give advice about economic things? Well, I’m confused. Well, because he’s warning reopening too quickly would lead to needless suffering and death. Don’t do it, mistake, we’re not opening sports this fall. We’re probably not gonna be able to go back to school, and he says that he doesn’t give advice about economic things. I’d like to know how he draws the line of separation between what he’s advocating here on the medical and scientific side and the economic side of things. There’s no overlap? 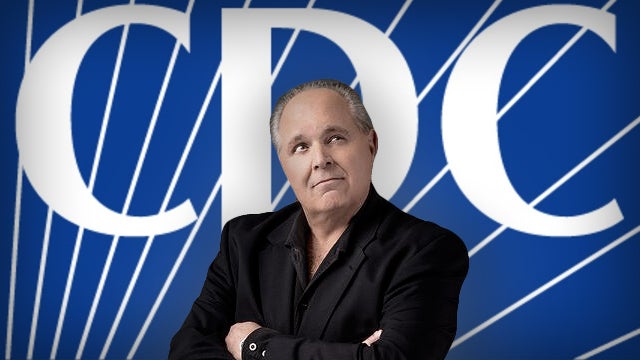 “I don’t give advice about economic things. I don’t give advice about anything other than public health.” Is he really saying that his advice has no economic impact? See, that’s what, I mean, folks. This hearing today has so largely been a bunch of people running CYA operations, just making sure that whatever negative blowback there is on this thing doesn’t stick to them.

This is not a profile in courage day, if you ask me. I haven’t seen the whole thing, but in what portions of it this morning I saw. One more sound bite, then we’ll do a break and get started with the phones after that. This is Senator Tim Scott from South Carolina at the hearing just a minute ago.

SCOTT: We didn’t set out with the goal of preventing 100 percent fatalities. That would be unrealistic. It is impossible. And we didn’t set out to keep quarantines in place until we found a safe and effective vaccine. That would take too long. While I respect the need for caution, we’re too often presented with a false dichotomy, either saving our economy or saving lives.

We’ve seen the goalposts around flattening the curve move. And I think that’s unfortunate. Because at the same time we’re doing that, businesses collapsed, mental and physical health have declined, deaths of despair escalate, educational outcomes nosedive, as we wait in our living rooms praying for some good news around therapies and around vaccines. We set out to flatten the curve, and I think we have done a pretty good job of that.

RUSH: Yeah, but we’re now on to moving on to flattening the economy.

TODD: Folks, listen. That was a year ago where Rush was talking about this. Fauci doesn’t give economic advice. “Well, I think summer camps can open safely, if you have kids say 6.2 feet away unless it’s that one kid with that one T-shirt that’s just… What is it? Is that MAGA? He needs to stay 60 miles away, otherwise, people will just get sick.”