What’s Really Going on at Fox 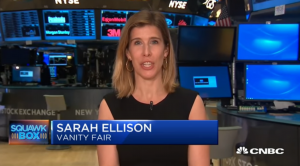 RUSH: Vanity Fair writer Sarah Ellison was on CNBC Squawk Box today and they were talking about all the things going on at Fox, O’Reilly’s gone and Megyn Kelly’s gone, and Roger Ailes and all this, and what does it mean? And the question was, “There’s some people out there saying the Murdoch sons are secretly embarrassed by Fox News and they would like to transform it, maybe change the political leaning of Fox News. Is that true?”

ELLISON: I think that they do have an idea of what they want the place to be, but they’re not stupid enough to want to change the market position of what their father created with Roger Ailes, and so I think they’re stuck a little bit. They want to have a culture change. Yes, they are, I’ve heard they are sort of embarrassed by some of what is on Fox News. They certainly don’t have the kind of relationship that their father did with the talent at Fox News, but they also want the profits.

RUSH: Look, this gets close. This is one of these areas where I have quite a bit of knowledge, and it’s a shame, but, folks, it really does boil down to the fact that a younger generation of Murdochs is coming up. They’re not conservative and their friends chide them and laugh at them, their wives work for the Clinton Global Initiative or some other thing, and it’s an embarrassment. But yet over here it is 25% of the profits, the entire 21st Century Fox. So they’re trying to gradually transform it and trying to keep it content-wise still something you can’t get anywhere else. But it’s a precarious situation.