RUSH: This is a story from Mediaite. I didn’t actually see this. It happened on MSNBC. MSNBC’s Elise Jordan, I don’t know who that is; I guess she’s an anchor, infobabe, analyst, strategist, whatever, reminded the GOP that dead babies do not make for good messaging. 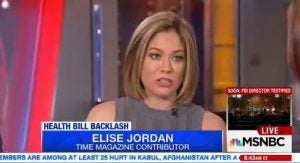 Now, what do you think she was talking about? MSNBC, uber-leftist admonishing the GOP: Dead babies do not make for good messaging. She said this in a segment about some conservatives having a backlash to Jimmy Kimmel’s emotional monologue on his newborn son’s congenital heart disease.

You know, Kimmel on his show the other night talked about the near death of his son and then steered into a political rah-rah for Obamacare. So he used the occasion of his son’s illness to pitch Obamacare. I didn’t, but some conservatives reacted and thought that he did the exact opposite. He’s tried to say: We need to get the politics out of this. We need to stop looking at ourselves adversarial. We all need to realize we’re the same team, the United States. And some conservatives said, “Hey, Jimmy, you actually made this a political issue.”

Anyway, that’s what she’s talking about here. And dead babies is her version of Republicans criticizing Kimmel. But there are no dead babies in the Kimmel story. The irony is, this woman, let’s not talk about dying babies and say we’re okay with dead babies as a reason to justify our health care plan. Not good messaging. Hello, Planned Parenthood. Hello, 1.7 million abortions every year. This woman is tone deaf. If there’s anybody that does political messaging on dead babies, it’s the Democrats. And they advocate for it. Situational awareness.