RUSH: We’ve got some Trump sound bites here from a interview that Lester Holt secured with Trump, Trump’s first interview since the firing of James Comey. And I don’t understand this, but NBC has released a lot of it. Not the whole thing. Like CNN aired three different excerpts. Why would you do this? I mean, why wouldn’t you hold it all for original broadcast on the NBC Nightly News? Well, I know what they’re thinking. Their thinking is that they can tease people to tune in and watch the whole thing if they give them just a few snippets. But if you choose the wrong snippets and you give the primary interest people have, then there’s gonna be no reason to watch the whole thing.

That’s just me. That’s old school broadcast thinking. If I had an exclusive like this, I wouldn’t do it anywhere else except this show. I mean, I wouldn’t even put a little excerpt out. Maybe on my website. Maybe. But I certainly wouldn’t give it to anybody else. But that’s how the establishment works.

RUSH: Now, let’s go to Lester Holt, the interview with Trump. As I say, we have three bites. First bite, Lester Holt says, “Monday you met with the deputy attorney general Rod Rosenstein. Did you ask for recommendations?”

THE PRESIDENT: What I did is I was going fire Comey. My decision. It was not —

HOLT: You had made the decision before they gave it to you?

THE PRESIDENT: I was going fire Comey. There is no good time to do it, by the way. They —

HOLT: Because in your letter you said, “I have accepted…”

THE PRESIDENT: They were around —

THE PRESIDENT: Yeah, well, they also —

HOLT: So you’d already made the decision!

THE PRESIDENT: Oh, I was gonna fire regardless of recommendation.

HOLT: So there was (unintelligible).

RUSH: Now, the media has also reported that the White House tried to dump on Rosenstein, that the White House said, “Oh, Rosenstein sent us this memo! I looked at the memo and said, ‘This guy’s gotta go!'” And then they had a story that Rosenstein was saying (paraphrased), “I almost resigned when I saw them try to lay this off on me.” There’s so much BS out there. This is… It’s just beyond the pale, the literal fake news. This next is classic Trump. Lester Holt says, “Your termination letter to Mr. Comey. You wrote, ‘I greatly appreciate you informing me on three separate occasions that I am not under investigation.’ Why did you put that in there, Mr. President.”

HOLT: Was it in a phone call? Did you meet face-to-face?

THE PRESIDENT: I had dinner with him. He wanted to have dinner because he wanted to stay on. We had a very nice dinner at the White House early on.

HOLT: He — he asked for the dinner?

THE PRESIDENT: The dinner was arranged. I think he asked for the dinner. And he wanted to stay on as the FBI head. And I said, you know, “I’ll consider. We’ll see what happens.” But we had a very nice dinner. And at that time he told me you are not under investigation, which I knew anyway.

RUSH: Now, the media’s trying to tell you that this is made up, that Comey would not have told Trump this. At the committee hearing today, somebody asked McCabe, “Would you ever tell the target that he was not under investigation?” “No, I don’t think we’d would that, Senator.” “Would you tell somebody that they are a target?” “Well, no, I don’t think. Sometimes.” “But, but, Mr. McCabe, don’t sometimes people get target letters?” “Sometimes, but it’s not our policy to identity targets. We at the Department of Justice… We… We… No, we don’t inform people.”

Where they were going with this was they were trying to get McCabe to say anything that they could interpret as Trump’s lying about this. They want to be able to say that Comey never told Trump he wasn’t being investigated. They want to try to make anybody and everybody they can believe that Trump is lying and making this up, and he made it up and lied about it so boldly that he put it in the resignation letter to Comey! So he doubles down on it today! “Yeah, Comey told me at dinner! He asked to come to dinner; he wanted to try to stay on.

“He told me three times I wasn’t under investigation. I knew it anyway.” And hear me! Hear me! He wasn’t and isn’t. It’s not a criminal investigation, folks. It’s a counterintelligence investigation. It’s a big difference. They’re not looking at criminal activity here, particularly at Trump. Everybody is hoping they find some. That’s what makes this so outrageous! It is a witch-hunt, a fishing scheme. Who knows whatever else this is, but there isn’t any evidence of criminality, and there isn’t any evidence of collusion yet.

So the important thing here is Trump doubled down on it. He mentions it to Lester Holt (paraphrased), “Yeah, he told me three times at dinner. He wanted to have dinner! I had him over here to dinner. It’s a nice place to have dinner, the White House, very luxurious. We’ve got a great residence here, a great chef. Why not? He wants come dinner; he comes to dinner. He told me three times I’m not under investigation.” Now, the media wants you to think that Trump is so insane that he would lie about that. 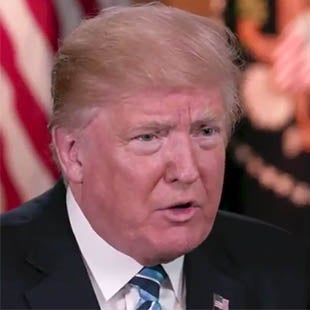 They want you to believe that he is literally sick and insane and would tell things are not true and know full-well they’re not. That’s what they want you token of Trump. Lester Holt says he wants to know the other two times, ’cause Trump says one was here at dinner. So Lester Holt says, “Well, that was one meeting. What were the other two times when Comey told you that you were not under investigation?”

THE PRESIDENT: He said it once at dinner, and then he said it twice during phone calls.

HOLT: And did you ask him, “Am I under investigation?”

They’ll talk to people who have some connection to somebody who knows Comey who will say, “That’s not the way the director operated! That would be very, very unusual.” So they’ll do anything they can to cast aspersions on this. Because, remember, it’s personal. Trump’s a pig, and he’s got to go. This that we’re watching is character assassination, career assassination. This is what the left does. When they can’t beat people at ballot boxes, when they can’t beat people in the arena of ideas, this is exactly what they do. I just wish everybody could learn from this.