The Media Wants Their Reaction to Be Your Reaction

RUSH: Sarah Huckabee Sanders is doing the White House press briefing today, the second day in a row. You know what the media is saying? Have you heard, Snerdley, what the media is saying? (interruption) No! (interruption) No, they’re not saying that. You haven’t heard… I saw one story alluding to the fact that Spicer was caught hiding in the bushes to avoid the media somewhere outside the West Wing. Now, I didn’t see an actual story saying that. I say somebody was writing about it. And it was clear that somebody was trying to leave the impression that Spicer is scared stiff and he can’t explain Trump to people, and he got caught hiding behind the bushes to avoid a camera crew.

And that’s not why. Spicer is serving his Naval Reserve duties at this time. Remember, like Josh Earnest did or Jay Carney? Can you imagine either of those people being absent for their Reserve service responsibilities? That’s where Spicer is. He’s not hiding in the bushes, hiding from the media or any of that. Sarah Huckabee Sanders is doing a great job. She is poised, she is confident, and she is fearless. Confidence is everything in this job. The appearance of confidence. And you can’t fake that. That’s the one thing about confidence.

Well, actors can do it, but that’s in controlled circumstance. You can’t do it in live, on-the-spot circumstances. You’re either confident or you’re not, and the confidence has to come from being informed. The confidence has to derive from being informed and knowing what the president’s positions are and being able to say them. And the confidence involves not being intimidated by the media. She’s doing a bang-up job with this. She really is.

RUSH: What did I tell you? What did I just tell you! So I’m just tuned in here to little bit of press briefing. Major Garrett is asking Sarah Huckabee Sanders (paraphrased exchange), “Look, everybody knows it’s against protocol for anybody to ask the FBI if they’re being investigated, and you say that Trump did and he said he did it three times. Don’t you think there’s anything wrong with it?” “Legal scholars have said there’s nothing to it, Major. You guys are getting caught up in process.” “Why do you say we’re getting caught up in process! You said that Trump did it; it’s okay.! It’s not okay to do it. Not everybody can call the Justice Department ask about an investigation. Why should a president be able to do it?”

“I don’t know, Major. I’m just telling you what the president told me. He fired Comey. He’s the only one that can fire Comey. Comey got fired. Comey’s gone! There’s nothing you can do about it, Major!” She didn’t say that, but that’s… They won’t let it go, and I tell you, they’re gonna zero in here on this idea that Trump may be lying, and they’re gonna try to get to Comey or three or four people removed from Comey to say, “I never told him that!” Well, they won’t quote Comey. They’ll quote people who know Comey who will say, “I know Comey, and I don’t think that would ever happen! I just can’t imagine Jim assuring target of an investigation that he’s not the target.” I can just see how this is gonna go.

And then yesterday, no, Trump did it on his own, and he asked these other guys for help and building a case. Now today it’s… So they think they’re being lied to, and they think that they can portray “a crisis of credibility.” What they want you to believe… This is exactly how they do it. CNN’s had three people on just in the last five minutes claiming that the press office in the White House is lying to you and that Trump is lying to them. It’s a crisis of credibility ’cause the press people don’t know the truth ’cause Trump isn’t being honest with them.

What you are supposed to think as a consumer of news, as a citizen of this country…? You are supposed to now think that the White House is out of control. It’s run by a bunch of incompetent boobs, and everything they say is a flat-out lie, and you are to have no confidence whatsoever. That’s their reaction; they want it to be yours. Their reaction is portrayed as a reaction by all people in the country. This is the trick the media has perfected, to make it look like what they’re reporting is not really what they think.

It’s what you think. It’s what a majority of Americans think. This is their trick, whether it’s gay marriage and a controversy in Indiana, the religious freedom law there, or this, their reaction is what it is. They try to make it look like it’s not theirs, that they’re reflecting mass public opinion. And they’re just hell-bent here on trying to expose Trump as a fraud and as a liar and as a coward now for being unwilling to admit at the outset that it was his decision, trying to slough it off to Rosenstein and Sessions.

And then there was this leak that Rosenstein was about to resign when he heard this narrative that it was his idea to fire Comey because it wasn’t. We don’t know what’s true. We can’t trust these people in the media to be telling us the truth, because one thing we can see is their visceral hatred for Donald Trump. And you know what hatred tends to do to honesty and credibility. You know what else they’re mad about? When I first tuned into the press briefing just at the bottom-of-the-hour break here, some infobabe…

I don’t know who she was. I’m not sure I’ve ever seen her before. She was really livid. Now, get this. Yesterday Sarah Huckabee Sanders said it, and she said it today. She said, “We’re hoping for a quick conclusion so we can put this behind us and move on with the business of governing the country,” and they’re outraged at that! They are livid. “How dare you say you want this over quickly!” They’re trying to imply that when Sarah Huckabee Sanders says that we want to bring this to a quick conclusion, that they want to cover it up and lie about it and end it.

That’s not what they’re saying. Anybody with common sense would know they want to wrap this up. They’re not saying there isn’t anything there. I am. This has been going on for nine months, and there’s no evidence. Nine months, and we don’t know what the allegation is. I take it back. One of these CNN comedy guys said (impression), “The reason why you fired Comey? I tell you what’s your big deal. The reason you fire don’t fire Comey is ’cause Comey’s the guy running the investigation into collusion between you and the Russians!”

Now, what do they want everybody to believe — and the CNN guy has either fallen for it or knows he’s exaggerating. They want you to believe that there is a criminal investigation of Donald Trump, that he knowingly engaged with the Russians to sabotage the election so that Hillary would lose. That’s what they want you to think is being investigated. And it isn’t. And they’re blowing their gaskets here because Trump had dinner with Comey and asked him if he’s under investigation. Do you remember these people blowing a gasket when Bill Clinton got onto Loretta Lynch’s airplane?

I don’t. Bill Clinton lands in Phoenix at Sky Harbor International Airport. Somebody tells him that Loretta Lynch is getting ready to leave; her plane is on the tarmac. Clinton says (impression), “Is that right? Loretta’s here? Get on over there! We gotta head her off before she taxis outta here.” He asks permission to come aboard and she grants it. Clinton gets on. What’d they tell us that they talked about, anybody? They “talked about the grandkids.” Loretta doesn’t have any. Loretta Lynch does not have any grandkids. 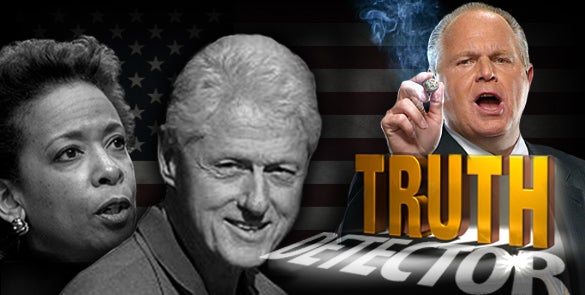 So we’re to believe that Clinton wanted to keep her from taking off, get on her plane at the tarmac to talk about Chelsea’s baby. But do you remember CNN or anybody else blowing a gasket at just the news that Clinton hopped on the attorney general’s airplane? The attorney general decides who to charge and not, not the FBI director. The FBI director recommends, but he doesn’t decide who gets charged or not. So Trump asking him if he’s under investigation? It’s not uncommon. These media people are trying to say (sputtering), “It’s the greatest breach of protocol.

Just a little bit. Just a liiiittle bit. They’re kind of upset that Trump isn’t cracking. Let’s put it that way. They were able to make Nixon crack. Nixon kind of went sideways, and that’s what they want Trump to do. They want to turn Trump into Humphrey Bogart with the marbles. That’s what they want — and so far, that isn’t happening. So they’re doubling down on the hate and all of this other stuff. Houston, Texas John, thank you for calling. Great to have you with us here in the EIB Network. Hello.

CALLER: Hey, Rush. I love your show and have foreign policy many years.

CALLER: I keep hearing the Democrats talk about wanting a special prosecutor again. You know, they better cover what they wish for because if they get a special prosecutor, he can start — or she — looking into Trump and the Russians, and he could veer off to Trump and Hillary. And then Hillary and the server, and Hillary and the foundation. They’re given wide berth on what they can look at, and they can go anywhere they want. I think that’d be the last thing the Democrats would want.

CALLER: I don’t know that.

RUSH: Is it the Senate Democrats?

RUSH: No! It’s not! That’s my point. Chuck Schumer doesn’t get to pick the prosecutor. The independent prosecutor comes from the attorney general’s office.

RUSH: Jeff Sessions would find the person. Of course, he’s recused. I mean, McCabe would find her, whoever the interim is. I think Trump ought to go name one. You know, name his son-in-law.

RUSH: Name Ivanka. You want to drive ’em crazy? Name Ivanka Trump as special counsel looking into the Democrats’ collusion with the Russians in the election because we know there was some.