Aspects of the Trump Trip Make Me Nervous

RUSH: This is from AOL News. “James Comey Has a Lower Job Approval Rating Than President Trump.” You probably wouldn’t believe that if you follow the Drive-By Media. “While President Trump has taken a lot of heat for firing FBI Director James Comey — and polling shows people think it was the wrong move — it turns out Trump is more popular with the American public than Comey. A new Harvard-Harris poll released on Tuesday to The Hill found a majority 60 percent of participants disapproved of Comey’s handling of his job at the bureau, while just 40 percent approved. The same poll found that Trump’s approval rating fell to 45 percent from 49 percent in March.” 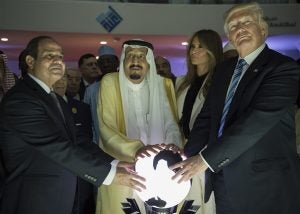 In the Rasmussen poll, Trump’s jumped up to 48% approval now. Just out today. Rasmussen: Trump’s 48% approval on the strength of the foreign trip. It intimates here voters are a little bit more comfortable with Trump as the presidency seems to be normal. Again, I ask the question I asked so succinctly and observedly, and dare I say smartly, on Monday: What is the difference in Trump over there and Trump here?

Look, folks, if you want, I could poke holes at a lot of things Trump’s doing on this Trump that make me really, really nervous. I know we tend here to defend Trump against these all-out assaults that the left is making, and we are genuinely, honestly into anti-leftist studies here and so forth. But, folks, what Trump’s doing with the Saudis and Islam is not consistent with the Trump on the campaign trail. It just isn’t. Think of it what you will, but it isn’t consistent. The Saudi Arabians were public enemy number one. Iranians maybe a close second or a tie. We spent too much money giving arms and so forth to the Saudis. It was not gonna happen anymore, America first. We were not gonna be engaging in this kind of thing, and here we are doing it.

I think I know why. I gotta be very careful here. I think you look at the national security team and the national security — look, I’ll just give you a couple names, H. R. McMaster and Petraeus have a definite foreign policy view of the Middle East, and it’s in conflict with what Trump said in the campaign. But their view is dominating, shall we say, on this trip.

RUSH: No. Come on. There’s a very simple explanation for this. Are you telling me that you don’t know? (interruption) Everybody’s asking me, “How come Melania and Ivanka wore the black veils meeting with Il Papa, and they didn’t cover their heads and faces when meeting with the Saudis and the Saudi king?” Well, that’s easy. It’s real simple. The Saudis do require all women in such positions to wear the hijab, the burqa, the whatever. Melania and Ivanka were given an exemption, which, if the exemption’s granted, you’re home free. The Saudis chose not to enforce it. They had too much riding on this. I mean, look, the arms they were buying?

I mean, this is a big deal. This is a huge, huge deal for the Saudis. If all it cost ’em was a couple of women not wearing the hijab. Fine and dandy. Small price to pay. Do you know what else is part of this deal? (interruption) They’re in there laughing. Look, I realize I sometimes am naturally funny. I wasn’t trying to be there. In addition to this $110 billion the Saudis are spending to buy American arms and so forth… You know, I saw Daniel Horowitz has a piece at Conservative Review that says the Saudis…

You’ve been asking me about this, Mr. Snerdley, ever since you first heard about the private sector being involved in the infrastructure. The Saudis are going to contribute hundreds of millions of dollars to U.S. infrastructure building, in exchange for being able to buy $110 billion worth of essentially armaments and ammo. There are a lot of people saying, “Wait a minute! This is not… We don’t want the Saudis helping build bridges and stuff. No, no.” A lot of people are not happy about that. So, anyway, King Salman and his son, the princes, decided to forgo the demand that Ivanka and Melania wear the headdress.

But at the Vatican, they insisted on it. The Vatican protocol, Vatican rules are that women must wear the veil in the presence of the pope during official ceremonies like this. It’s not necessary when the pope is doing an audience with visitors and people from around the country where there’s a group up there, but an official quasi-visit state like this, the women have to wear veils and the Vatican insisted on it, and that’s why. So you could say that the…? (laughing) Do I want to go there? (laughing)

You could say the Saudis were a little bit more tolerant than the Catholics. (laughing) Just kidding.