RUSH: Yesterday. One of the things that we ended the program with yesterday and we didn’t have time to get into it. You know, the new chief of staff is John Kelly, and that resulted in Scaramucci being sent packing after only 10 or 11 days in the job as White House communications director.

Kelly is said to be bringing “military-style discipline” to the White House in an attempt to bring order out of chaos to stop the leaks and to have a more productive day-to-day working atmosphere in the Oval Office and in the West Wing. And one of the things from CNN… This is the only place that it’s been reported is CNN. As I say, it was first reported as the program was ending yesterday. “Kelly Called Comey to Express Anger Over Firing,” according to — dadelut dadelut — anonymous “sources.” 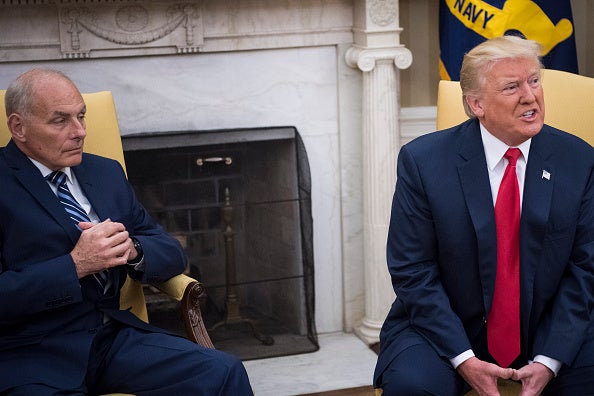 “New White House chief of staff John Kelly was so upset with how President Donald Trump handled the firing of FBI Director James Comey that Kelly called Comey afterward and said he was considering resigning, according to two [anonymous] sources familiar with a conversation between Kelly and Comey.” So Kelly is brought in to batten the place down, to make sure there aren’t any leaks, and the first leak is about Kelly supposedly (laughing) calling Comey, saying (paraphrased), “I hate what happened to you, buddy! I hate it. I hate it so much, I’m thinking of resigning myself.”

But nobody else has reported this. Now, CNN says, “Both [anonymous] sources cautioned that it was unclear how serious Kelly, then the secretary of homeland security, was about resigning himself.” Well, what the hell, then? Why even report this if you can’t even attest from your two anonymous sources that Kelly meant it? It’s like so many of these anonymously sourced stories. You notice the last sentence basically takes back the entire piece, as in: Kelly might not have been serious about resigning.

Well, the headline is: “Kelly Called Comey to Express Anger Over Firing, Sources Say.” The lead sentence has to do with Kelly almost quitting himself, and then they say: Nah-nah-nah-nah. We can’t confirm that. “‘John [Kelly] was angry and hurt by what he saw and the way (Comey) was treated,’ one of the [anonymous] sources said. Comey learned of his dismissal on May 9 from televisions tuned to the news as he was addressing the workforce at the FBI office in Los Angeles… Comey made a joke about it to lighten the mood and called his office to get confirmation.

“Comey, who took Kelly’s call while traveling back from Los Angeles to Washington, responded to Kelly by telling him not to resign, one of the [anonymous] sources said.” So what happens is Comey gets fired, Trump sends his aide-de-camp Keith Schiller over to Comey’s house or Comey’s office with the letter saying, “You’re canned.” But Comey’s not there. Comey’s in LA, and he is addressing the LA office of the FBI. So he hears about it watching TV, gets on the plane. CNN, all the networks covered Comey’s motorcade on the highways of Los Angeles on the way to the airport.

They covered Comey getting out of the SUV, the Suburban, walking to the stairs of the private jet. He got on the private jet, flew back to Washington, D.C. All this was covered OJ-style. What we didn’t know is that on that plane ride back home, Kelly calls Comey (paraphrased exchange): “This is rotten the way you were treated! I’m thinking of resigning, too.” But Comey said, “No, no, no, no. No, no, no. Do not resign just because of what happened to me.”

CNN: “The sources said Comey and Kelly are not close friends but that they had a professional relationship and a deep mutual respect for each other.” They’re not close friends, yet Kelly called Comey. Kelly’s a tough, rough Marine. Kelly was angry and hurt by Comey’s firing, so angry and hurt he was tempted to resign. I don’t know. It’s just… It’s more of the same. Time will tell.

You know, the jokes are already going around that if Kelly does his job well, Trump’s gonna feel upstaged and will fire him. How do you all feel about this “chaos” in the White House, this reported chaos in the White House that the Drive-Bys just can’t stop reporting? Is it beginning to have an effect on you, you Trump supporters, or are you still confident and well insulated from it?