My Principles Have Never Wavered

CALLER: Good, Rush. It’s an honor to speak with you again. 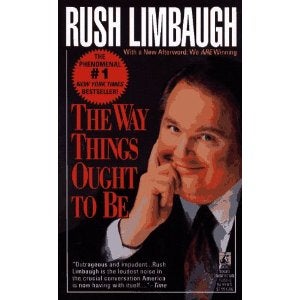 CALLER: Congratulations on 30 years. So I’m 30 years old myself and I’ve been listening to you for, I think, five or six years, and a few years ago my dad bought me your first book, which is The Way Things Ought to Be. For those in Rio Linda, you wrote that back in ’92, and you’re still using Rio Linda, which I love. But in reading it, I realized very quickly that you’re exactly the same person today that you were 25 years ago, and as fast as things move today, I found that to be pretty cool. That over 25 years, nothing much has changed principle-wise.

RUSH: My principles and core beliefs haven’t changed. You know, I don’t change what I think with the wind just in order to perhaps attract more people. I am what I am, believe what I believe, and I say so. Now, we adapt to trends in media, broadcasting, and elsewhere in society. But the core — very perceptive of you. You’re exactly right. That book still holds up today.

RUSH: Just take Bill Clinton’s name out, put Obama’s name, and it still works. Everything in it still works today. In fact, that book has been ripped off. You know, over in the Middle East there’s a copycat host of me called Ali Limbali, and he wrote the book The Way Things Ought to Become. I was actually thinking of taking action against it except I was flattered by it.

CALLER: (chuckles) Well, you know, that was one of the things that I thought of. Like, when I read through, one of the things — like, just one example for those that should go buy it on Amazon today — is the Anita Hill-Clarence Thomas story in the book. You literally wrote, “Mark my words — in fact, mark this place in the book,” and you predicted that the mainstream media story would unravel. Obviously, it did. And then you have the sentence about Clarence Thomas that it was “a sordid attempt to destroy a man’s life,” and I was like, “This is…” I mean, that’s Trump-Russia right there.

RUSH: The left is who they are. Their techniques are what they are, and they practice them consistently.

CALLER: So, yeah, I just wanted to call and thank you for, you know, the 30 years of intelligence guided by experience, ’cause I look back at that, and I see, “Well, Rush is saying the same thing. I don’t know how exactly this is gonna play out, but if he was right 25 years ago, he’s probably gonna be right here.”

CALLER: So I appreciate it.

RUSH: Bingo! Thank you. That’s exactly it. Right then, right now, because the subject matter is the same: The left. And there’s nobody who knows the left better than I know ’em. I know the left like I know every square inch of my gloriously naked body, folks, not just the back of my hand. I know them. I know them better than they know themselves because they refuse to be honest about who they are really are and what they really believe, but I am. So I am thrilled that somebody is able to perceive it as old Nick has here.