RUSH: The H. R. McMaster stuff. Folks, this to me is troubling. We have heard, I mean, you and me, the American people, people paying attention, have heard that there are factions inside the White House and in the deep state that are trying to undermine Trump. You are very well aware of this. So am I.

Some people are worried and have expressed their concern that it’s even people Trump has nominated who may actually be sandbaggers because of all of this leaking. All of this leaking cannot simply come from Obama or Clinton holdovers, like the transcript the Washington Post had of these phone calls to the president of Mexico and the president of Australia. These calls happened within Trump’s first two weeks. The full transcripts were sent over to the Washington Post, and they have published them today. And how does that happen?

I’m just gonna tell you this. You’re Donald Trump, you’re president of the United States, you can’t conduct genuinely productive conversations with anybody if you think that it’s all gonna be made public at some point. You just can’t. You know, even ordinary citizens not in politics who are not celebrities, not in public eye, I sometimes get email from people who put a joke addendum like a disclaimer at the bottom, “If this email is ever made public, I didn’t say what it says here.”

Because everybody’s now worried that what they say in an email to anybody might someday be made public. The moment you believe that, no matter who you are, it is going to limit your openness and your honesty to people you’re having conversations with. It’s no different than putting a camera someplace.

The moment you deposit a camera, say, in a corner in a busy neighborhood or bring a camera into the board of directors meeting or anywhere, you put a camera where people know it’s there, whatever happens after that is artificial. At least for a while. It takes awhile for people to become accustomed to its presence and forget that it’s there. But when they first know it’s there, you wouldn’t believe how self-conscious everybody gets. It’s natural, part of the human existence. There’s a camera there, people looking at me. There’s pictures there.

But the human ego is an amazing thing. It forces you to be so self-conscious and self-aware, and then you tell yourself that everybody else is paying attention to you too. Now, they might be critical of you, they might be approving, but most people think people look at them critically, with disapproval. It’s amazing how often human beings attach perfection to the people they think are judging them, rather than realize everybody’s a mess, everybody’s screwed up. It’s one of the fascinating things about human nature to me.

I’m just telling you, if you’re Trump, and you can’t even pick up the phone and call the president of somebody with the freedom of knowledge that nobody else is gonna hear it, then how open are you ever gonna be? You’re gonna immediately start talking and saying things not based on whether they are smart or wise or need to be said, but rather you’re gonna say things in case it goes public so that you look good or don’t make a mistake or what have you. I don’t know how anybody can conduct true official business like this. So it is another attempt at paralyzing Trump, all of these leaks.

Now we get to the news that H. R. McMaster, who runs the president’s National Security Council, H. R. McMaster, military guy, bald-headed, I remember when Trump appointed him. Flynn had this gig first and they got rid of Flynn because Flynn had supposedly lied to Mike Pence about what he had said to the Russian ambassador at lunch. When Trump chose H. R. McMaster, it happened to be during — I think it was January-February, because Trump was at Mar-a-Lago, and the announcement was made at Mar-a-Lago. And I will never forget the Drive-By Media and the Washington establishment celebrated, “Oh, this is wonderful.”

I mean, even some in the Republican establishment, “This is absolutely phenomenal. This reassures us to no end. H. R. McMaster. This is great. This proves that Trump is knowing what he’s doing.” I was alarmed. I mean, any time the swamp stands up and approves something Trump’s doing, that, to me, is a disconnect.

But I went with it because what are we gonna do? Not gonna be able to talk Trump out of it so he chooses H. R. McMaster. There have been leaks about what’s going on in the National Security Council, but yesterday leaks became reality. H. R. McMaster fired, it turns out, three Trumpists. The big name that got fired yesterday was Ezra Cohen-Watnick.

Ezra Cohen-Watnick is a thoroughbred. He’s a young Millennial thoroughbred conservative, and it was Ezra Cohen who led Devon Nunes to the intel in the White House that demonstrated some of the chicanery that was going on. He’s a totally devoted Trump loyalist and a conservative and an Iran hawk. H. R. McMaster fired him yesterday. Before that he had fired somebody else named Rich Higgins who was seen as an ally of White House chief strategist Steve Bannon. He was let go on July 21st.

Another person has been let go. This person, I think, is Victoria Coates. I’m not sure of the first name, but she was Ted Cruz’s foreign policy strategist during his campaign for president. So (it’s hyphenated name) Ezra Cohen-Watnick and Rich Higgins, you could say, were allies of Steve Bannon. They were solid conservatives. Ezra Cohen was the senior director for intelligence on the National Security Council. As I say, he was described as a hawk on Iran. He wanted to rework some of the laziness that has existed now in our dealings with Iran vis-a-vis the Iran nuclear policy.

He also… This is a big one. Ezra Cohen wanted to focus on outing whoever these embeds are in the deep state and get rid of ’em, and H. R. McMaster, from what I’m told, doesn’t think that’s a problem. I’m also told from little birds that H. R. McMaster doesn’t think Susan Rice or Samantha Power pose a problem and this unmasking thing is much ado about nothing. Now, there is a triumvirate here. You have H. R. McMaster and Mattis (the secretary of defense), and maybe General Kelly (chief of staff). They could well be a team. McMaster is also a protege of David Petraeus.

The reason all this may matter is that these guys have their own ideas of military and foreign policy regarding the Middle East, and I think it’s H. R. McMaster, if I’m not mistaken, who if he had his druthers, there wouldn’t be a Syria. He’d wipe ’em out. Or maybe there wouldn’t be a Bashar al-Assad. But a lot of people are scratching their heads now over H. R. McMaster getting rid of Bannonites and conservatives and Trumpists from the National Security Council. These are guys that believe that the deep state has got a bunch of rogues in it and need to be cleaned out. 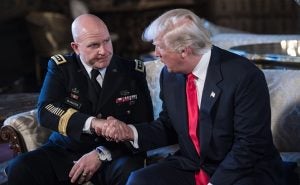 And pardon me for saying so, folks. But it appears here that there’s a cabal that is being set up among Trump supporters that really doesn’t think the deep state’s any big problem — and doesn’t think that Susan Rice or Samantha Power or any of this unmasking is any kind of big problem — and are getting rid of people who are deeply loyal to Trump. And you have to think (this is common sense) in the entire national security foreign policy establishment — and it is an establishment.

In fact, it is a huge part of the, quote-unquote, “ruling class establishment.” You have to believe there’s some people in this group that think Trump doesn’t know what the hell he’s doing, “I mean, he’s a construction guy from Manhattan by way of Queens! I mean, for crying out loud, the guy doesn’t know what he’s talking about,” and who might be inclined here to, well, use the power of their closeness to Trump to influence foreign policy and so forth.

Reportedly Trump is livid. Now, again, these are things I can’t personally confirm. But apparently Trump is livid over some of these changes McMaster’s making. But I don’t know if that means McMaster or anybody else is in trouble. It was rumored a couple months ago that McMaster was on thin ice. Over what, I forget now. But there’s all kinds of intrigue going on behind the scenes that we still don’t know quite how to interpret.