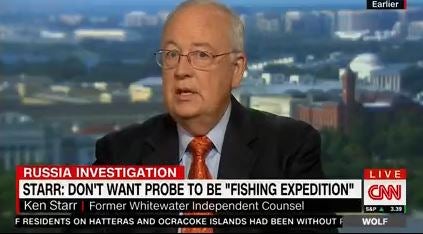 RUSH: Apparently, Ken Starr was on CNN earlier today. He took a break from selling cigarettes to kids. (chuckling) He said about the Robert Mueller special counsel investigation he really doesn’t want it to become “a fishing expedition.” Earth to Ken Starr: That’s all it is! That’s what it started out as, and it’s all that it can be because there isn’t any crime there, Mr. Starr. The special counsel shouldn’t even have been appointed. There’s no underlying crime, and so they’re trying to find one.

They’ve opened a second one here. It is a very, very dangerous time for Lewandowski, any of these people. Not to mention Trump. But these people have limitless money and limitless time, and apparently they have a limitless field. They can go anywhere. There’s not even a time limit on how far back they can go because none were given at the time Mueller was appointed. So Ken Starr says (paraphrased), “I really don’t want to see this become a fishing expedition.” That’s all it is, pure and simple.