What Went on Between Debbie and the IT Guy?

RUSH: Folks, there’s some things on the program I want to get to just to give you a heads-up. We are gonna get into a little bit more about Debbie “Blabbermouth” Schultz and her IT staffer. She gave an interview. Either I think it was the south Florida Sun Sentinel or the Orlando… It’s a south Florida newspaper, and the way this reads, she went out of her way to keep this guy on the staff, and she goes so far as to say, “I really felt that he was becoming a victim of anti-Muslim bias.” 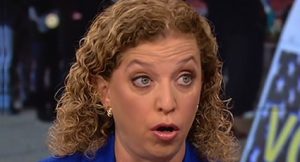 Now, this is the guy that performed all kinds of trickery when her own computer network system at the Democrat National Committee. The guy should have been fired long ago. Not only she didn’t fire him, she kept him on the payroll and kept him close. This reads… Well, I don’t want to go there, but it reads like there was something else going on between these two other than just a work relationship. That’s the way I’ll put this. ‘Cause this doesn’t make any sense, holding onto this guy knowing full well what he did, ’cause these flimsy excuses here that she is offering really don’t hold any water.

CALLER: Well, I’m okay. I fell and broke my pelvis ten days ago, so this is perfect, just to lay here and listen.

RUSH: I’m sorry to hear that.

CALLER: Oh, it’s going to be okay. So you were gonna address this — oh, I want to tell you one thing. How many years have you been on the air?

CALLER: Okay. Well, it wasn’t that long ago, but I live in Lincoln, Nebraska, my mother lived in Jefferson City, Missouri. I would go to visit her and take care of her, and I listened to you one time, and I came back and I said to my husband, “You’ve gotta hear this guy that’s on the radio, a conservative, and how he talks.”

RUSH: Yeah, that was happening all over the country back in 1988. It was very gratifying.

CALLER: Since then we’ve been listeners, our family, except one, one holdout. My thought is about Debbie Wasserman Schultz. I’m so frustrated that — is she gonna get away with this? There are so many scandals that the Democrats have, but the Republicans don’t push and try to bring it to justice.

CALLER: Is it because they have scandals themselves?

RUSH: The Debbie “Blabbermouth” Schultz thing is interesting. Your overall question, is she gonna get away with it? Traditionally Democrats do get away. Hillary has gotten away with whatever she did with her emails. And Bill Clinton and Loretta Lynch appear to get away with what should have been an illegal meeting on her airport on the tarmac in Phoenix while a supposed investigation of her emails was being conducted by the FBI. All of these various nefarious activities never seem to be called upon.

Debbie “Blabbermouth” Schultz finally broke her silence on this staffer of hers that was arrested, Imran Awan. She says that she has no regrets about keeping him on the payroll after he was blocked from working on Capitol Hill. This guy and his brothers may actually have stolen and hacked all kinds of data from the DNC servers. They are Pakistani. They wired $236,000 back to Pakistan. They were allowed to keep it. Debbie “Blabbermouth” Schultz said, “I did the right thing keeping him on, and I would do it again. It would have been easier for me to just fire him.”

But she says she kept him on because she felt that he was being discriminated against because of his Islamic or Muslim religion. Now, folks, this guy was a thief. This guy had stolen, hacked, who knows what — part of the IT firm that they had hired to protect their data. I mean, it’s a royal mess. And this guy was attempting to flee the country when he was caught and arrested, and Debbie Schultz is saying, “I woulda kept him on, I don’t care.” There’s something between these two beyond the work relationship, because this doesn’t make any sense. Whether she gets away with this or not? I don’t see any evidence that she won’t.