CALLER: Hi, Mr. Limbaugh. How are you today?

CALLER: Well, what I wanted to say first is that I’m a recent iPhone convert. After listening to you for however many years, you finally convinced me to get one, and I love it, I absolutely love it.

RUSH: What kind did you get?

CALLER: Well, I went with a 6s ’cause I wasn’t sure I was gonna love it, and so I thought, well, I’ll go a step down and then if I love it, great, and then —

RUSH: Yeah, you can always step up. That’s a brilliant decision you made, so you do like it?

CALLER: I do. I don’t know everything about it, but I’m loving it. But the real reason I’m calling, I wanted to see what your thoughts were about the government involvement in improving rural internet access, because where I live it’s kind of important to me. On the one hand I’m thinking, yay. But on the other hand, if they’d just butt out, I’d probably already have it, you know? So I was just wondering what you thought about them getting involved and spending more money.

RUSH: Well, the truth about this is that people’s phone bills, for 30 years at least, have had a portion of their bill go to rural telephone service. It’s been for decades.

RUSH: Rural internet service fees have been added years ago. It’s already happening. People’s phone bills are already funding service for rural internet. Now, it’s probably having trouble rolling out because who’s behind it? The government. They collect the money but then spending it’s a whole ‘nother matter.

RUSH: Do you not have adequate internet service where you live?

CALLER: Well, I’m probably in a little bit of a unique situation. I do have it through my phone company. It’s crummy. I supposedly get three megabytes per second, yippee, but I’m right on the boundary of a smaller mom-and-pop kind of rural company, and I can see fiber from my front porch. And if my house were 200 yards to the north, I would already have fiber.

RUSH: Oh, man, that would drive me — you can see giganet fiber —

RUSH: — 200 yards away, and you’re stuck at three megabits a second?

RUSH: I would go nuts. I would literally be going nuts.

CALLER: Well, it’s kind of become a project with me to see if I can get that.

RUSH: Who’s your provider now? How are you getting your internet, your Wi-Fi now?

CALLER: My phone company. They are holding me hostage. Because that’s my only choice for (unintelligible) local exchange, I guess, if you will. I had to educate myself a little bit on all this. And I tried to get them to release me so that I could connect to this neighboring phone company, but they essentially just said no.

RUSH: Wait a minute, now. Hold it a minute. See, we’re laboring with some difficulty here because we don’t know the names of the company, and I can understand you might not want to irritate ’em, they’ll cut you off. Right? That’s what you’re thinking?

RUSH: So you don’t want to mention it.

CALLER: I don’t know. My husband says I already have a big black mark by my name because I’m that thorn in their side.

RUSH: Don’t worry about that.

RUSH: Do you have a contract with them for a certain length of time that you can’t break? Is that what it is?

CALLER: No, no, no. It’s because it’s where we live you have your land lines —

RUSH: Oh, they have a monopoly.

RUSH: You can only get service from them?

CALLER: I’m hostage from my — is it called? IOAC. Incumbent local exchange carrier. And I tried to get them to release me so that I could connect to the neighboring one, who has run fiber to the home, but they said, oh, no, we can’t do that.

CALLER: Because they don’t want to. They tried to confuse me with all the acronyms and legalese and all that nonsense, and so I became a little educated. But it boils down to the fact of the matter, they don’t want to let me go. And my thoughts on the government involvement is if they just step back and look at some of these stupid regulations and maybe cut the internet —

RUSH: This is where I am woefully inept. I would have to admit that I don’t know where to tell anybody to call if it’s the government that you need to reach. I just don’t deal with ’em, so I’m embarrassed to tell you that if you want to try to access — it already exists, the subsidizing of internet for rural areas. People have been paying a portion of their phone bill to this for months. 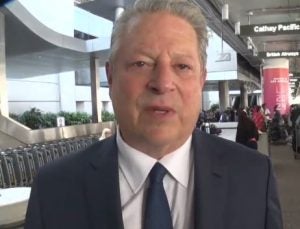 Algore ran for the Senate on this premise. It’s been one of his big deals ’cause he invented the internet, remember? But he forgot to invent it as farms. So he came along and promoted this idea of rural internet service, and he wanted to get credit for bringing it to the rural areas in addition to the cities. So it’s there. I just don’t know who to tell you to call. (interruption) I don’t know what? Yes, I know the FCC direct — yes.

I don’t know that they would know who to call. In the massive federal bureaucracy, who do you call to find out? It wouldn’t be the Department of Commerce. They handle the National Weather Service. Maybe we can find out here, Martha, and as you continue to listen, if we come up with an answer, we’ll pass it off. In the meantime, I’m gonna be thinking about your situation. There has to be a way here. You’re 200 yards away from giganet internet speeds, gigabit, 200 yards away from fiber. She can see it!

RUSH: You know, I was thinking here about Martha, our caller who lives 200 yards from fiber gigabit internet service, and her cheap, low-speed phone company won’t let her change. She doesn’t know who to call. (sigh) When it comes to calling government to fix a problem, I don’t have the slightest idea. I never do it. I just… I’m at a total loss. I am of absolutely no value to you if you need to know where to call in government. So I reached out to people. You know what I found? I got a great answer.

No, no. “Do you call…?” I don’t know who to call. I don’t depend on ’em for anything. If anything goes wrong, the last thing I want to talk to is anybody there. Talk about nothing getting done. You talk about not even being able to get through to whoever you do need to get through to. But somebody said, “No, Rush, it’s real simple. In fact, it’s a great example of what they’re for, your members of Congress. This is your local congressman. This is exactly who you call. Call his or her office.”

So, Martha, do that.