FBI Raids Manafort’s Home Even Though He’s a Cooperating Witness!

RUSH: Okay, so it looks like the whole Russian story has taken a day off. The Drive-Bys are substituting this North Korea situation for the Russian story as the latest example or the latest opportunity or the latest reason, however you want to characterize it, that they say we have to get rid of Trump.

Now, the Russian story is still there because the FBI raided the home of Paul Manafort [on July 26], former Trump campaign manager, before dawn. Now, the interesting thing about this is Manafort is a cooperating witness! Who in the name of Sam Hill has FBI predawn raids of a cooperating witness? So I had to seek the advice of several in the legal community. ‘Cause this didn’t make any sense to me.

The thing about this that is odd is that if Manafort is cooperating, one of two things: Either they don’t trust him to be cooperating, either they think he might not turn over some documents that he has pledged to turn over and so they’re going in there to find it even though he’s cooperating, or it’s a message. A predawn raid of your campaign manager, who is cooperating with you, is a shot across the bow. It could be an effort here to signal — because we’ve also learned overnight that the Trump legal team is in regular contact with Mueller.

Did you know that? The Trump legal team is apparently in regular contact with Mueller, and, according to what I read — we’re still tracking some of this stuff down. It’s been a very, very hectic morning here. I’ve only had about 20% of my time to prep the program because I’ve been doing some tech testing that has got me so ticked off I’m actually withholding my anger here. I’d love to share it with you just to get it out. But, anyway, I’m doing my best to keep it contained, which I seem to do every day. I’m the one that has to keep it contained.

I can’t unload or everybody else goes nuts. Everybody else can unload on me, but I have to keep it inside, let it percolate and it explodes somewhere like on the golf course. I pretend the golf ball is Hillary Clinton, and bammo, whack. But, anyway, the Trump team supposedly is communicating with Mueller. And, further, the messages are, apparently, that Trump wants his lawyers to tell Mueller how much he respects what he’s doing and how much we’re willing to cooperate.

I want to take you back to a couple of — well, one point. Grab sound bite number one, because I made this point back on August 4th. I forget what the specific news item was. We went back to the archives here, and whatever it was, it made me say this.

RUSH: That’s true. And sets up a new one. That’s back on August 4th, so that’s just, what, five days ago. So last week. Now this predawn raid of a supposedly cooperating witness is puzzling. Now, Manafort’s allies, if you will, fear that what’s going on here is an attempt by Mueller — remember, there’s no limits on this guy’s scope. He can investigate anything. And Manafort buddies fear that Mueller is hoping or trying to build a case against Manafort that’s unrelated to the 2016 campaign.

And if they can make a case — and, by the way, when they have unlimited money and a no-limitations scope and if they want to find somebody who has done something illegal, irregular, or if they want to create that — this is another thing — they can create a process crime. Very simply, a witness can tell Mueller’s team, “Yeah, that happened on Tuesday.” But what if it really happened on Wednesday? They can say the guy lied to ’em. Process crime.

The point is that once they find something to charge, then they’ve got leverage, and then they can offer a deal. “Okay, Manafort, look what we found here. We found that back in 2008, you were doing X, and it led to event Y, and we don’t think you want people to know about this. We’re willing to let you go on this if you’ll turn state’s evidence or if you’ll tell us what was actually going on between the Trump campaign and Russia.” That’s the great fear. 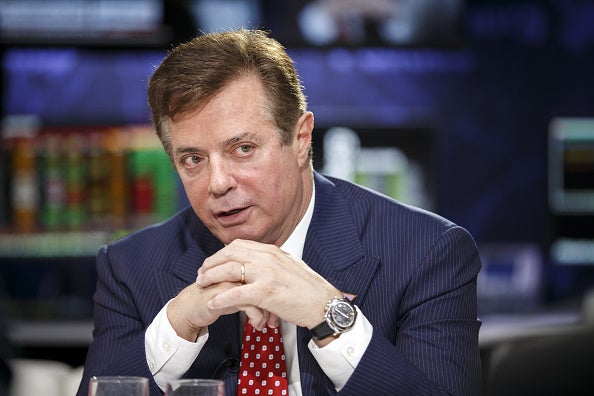 That’s why I said five days ago it’s a very dangerous time for people that are gonna end up being called before this grand jury that Mueller has impaneled or who are under investigation, because of the specter of a process crime. Remember, this is what did in Martha Stewart. They didn’t find any evidence of any wrongdoing, so they create the crime during the investigation. It’s become a staple, if you will, in the ammunition that prosecutors have at their disposal. If they want to get somebody, interview ’em 15 different times on the same subject.

You get to the point where the interviewee says, “I’ve told you this! I’ve told you this 10 times. What more…?” “We want to hear it again.” And if there’s any variance, here comes the process charge. “You lied to federal investigators. You lied to us!” “I didn’t lie. I got the date wrong.” “You lied. That’s the charge! We have the power, we have the ability, we have the desire to charge you.” So then you get Manafort on something unrelated to the 2016 campaign, and then you try to get Manafort to flip and give you information about Trump or Trump’s inner circle, the Russians, the presidential campaign, anything.

There’s no limits on this, folks. It is a very dangerous time for everybody involved. And when I saw this predawn raid… Look, it caught me up short because he supposedly is cooperating. You just don’t raid before everybody’s up? I mean, here you’re sleeping — you’re soundly sleeping — and all of a sudden lights and sirens outside your house before the sun comes up, and it’s the FBI with a search warrant? And they left with a bunch of documents, by the way.

RUSH: Now, here’s how we know the Manafort story. It’s in the Wall Street Journal. Let me read you a little quote here from Wall Street Journal article on Manafort. “Federal agents working with special counsel Robert Mueller last month [July 26th] raided the Virginia home of Paul Manafort, President Trump’s former campaign manager to obtain documents and other material, according to people familiar with the matter.” Who would that be? Who would be “familiar with the matter”? People working on the matter. That would be Mueller’s team.

Of course it’s a leak. Absolutely right it is a leak, another leak. It’s July 26th? This is August the 9th, so 2-1/2 weeks after the fact, and it happens right in the swirl of this North Korea stuff where the Russia story had taken some hours off.