I wanted to share them with you as a prelude to getting into all the rest of the content on today’s program. There are three bites here. They run just about a minute each, and we’ve edited this for time. You’ll have to read the entire interview when it comes out in the next issue of The Limbaugh Letter. But the first claim that D’Souza makes — and by the way, to back this up, we need to point out that militant Islam has also deep ties to Hitler and Nazism.

Hitler had an appreciation and an understanding for Islam, and there are numerous bits of evidence that recount meetings between the Grand Mufti and mullahs and Hitler during World War II. These are things not said in polite society. It’s not alleged. What D’Souza is doing — and he’s in the process of making a movie about this as well. He said it will be ready next summer, into next September, as a prelude to the election. His first contention is there are basically three examples of the Nazis, the German Nazis adopting leftist ideas from the American Democrat Party.

I’ll tell you why he decided to do this. He’s like everybody else in the right-wing: Fed up with the allegation that racism and all this has its home in the Republican Party. It’s the exact opposite. Racism, segregation, all of this, these were all Democrats back in the 1960s that were trying to violate civil rights and keep blacks out of universities.

All those governors and Bull Connor, the fire chief, turning the firehoses on African-American protesters and Martin Luther King? They’re all Democrats. D’Souza is, like many people in the right, frustrated with this history revisionism. So he decided to write the book and do a movie about how it’s even worse than that, and his first example here is how Hitler stole from the Jacksonian Democrats of the 19th century.

D’SOUZA: Hitler remembered that in the 19th century the Jacksonian Democrats — despite the existence of all these treaties with the American Indians — essentially decided to violate the treaties, throw the Indians off their land, drive them further west. So displace them, resettle that land — and if any of the Indians remained, either kill them or attempt to enslave them. Hitler goes: “This is a fantastic idea!

“I don’t need to go to India like the British. I’ll just conquer in Europe; I’ll throw the Poles off their land, the Slavs, the Eastern Europeans, the Russians. We’ll resettle that land with German families — and if any of the natives stay back, we’ll enslave them.” So this notion — the historians call it Lebensraum, which means “living space.” But it’s basically German expansion in Europe. Hitler got the idea to do that from the Jacksonian Democrats of the 19th century.

RUSH: As I talked to him about it, I said, “Wait, is this just your interpretation? Are you looking at events that happened in America in the 19th century and then comparing events that happened in Europe in the 1940s? Are you drawing a connection?” “No, no, the Nazis acknowledged this,” he said. The historical record is clear.” The Nazis acknowledged where they, quote/unquote, learned this stuff. His point here was that when he saw how the Jacksonian Democrats dealt with Indians, Native Americans, throwing them on the reservation, throwing them off — basically getting them out of mainstream circulation; saying, “Hey, this is a good idea.”

Now, this is going to offend I can’t tell you how many people. It’s going to light up I can’t tell you how many people — if his book isn’t ignored and if his movie isn’t. But I guarantee you, these are just things you don’t say. You just don’t say them — and, of course, D’Souza is saying these things after having been imprisoned by the Obama administration for this bogus campaign finance charge. The second example of the Nazis adopting leftist Democrat ideas was that Hitler stole the whole idea of segregation from Southern Democrats. See what do you think of this.

D’SOUZA: The Nuremberg Laws were the laws that turned Jews into second-class citizens. The senior officials of the Nazi Party get together to draft these laws. There was a transcript made of their meeting, ’cause they felt it was a momentous occasion: They were founding the world’s first racist state.

D’SOUZA: And then one of the Nazis in the justice department, who happened to have studied in America, basically told the Nazis: “Not so fast. You can’t start the world’s first racist state because the Democrats in the American South have already done it. 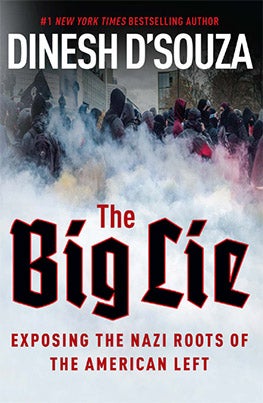 D’SOUZA: Because all the things we’re talking about — outlawing intermarriage, segregation, discrimination — they already have these laws; they exist. So what we have to do,” he said, “is take the Democratic laws, cross out the word ‘black’ and write in the word ‘Jew’ and we’re home free.” So the Nazis then began a detailed examination of the Democratic Party laws.

RUSH: So here’s a second example, that Hitler and the Nazis studied the way Democrats segregated, discriminated against Native Americans and then African-Americans — and the third example he cites is eugenicists and Margaret Sanger.

D’SOUZA: The Nazis, in the 1930s, based both their forced-sterilization laws as well as their euthanasia laws on the models that had been created by Margaret Sanger. As Margaret Sanger said, “More children from the fit and less from the unfit,” and that’s how she viewed birth control. And not as a matter of giving every woman a choice, but as a matter of convincing the sort of, the successful and the fit to have more kids and the unsuccessful — the sick, the “imbeciles” and what she considered to be the disposable people — essentially to prevent them from “breeding” altogether.

The other idea that a California eugenicist named Paul Popenoe had proposed. He said, “We have…” He said, “We have all these useless people who are already born, and so it’s not enough to have sterilization. We have to have euthanasia. We have to kill these people off. The first people that they killed were not the Jews. They were the sick, the disabled, the group that was called “imbeciles.” And later, the Nazi euthanasia program was expanded into Hitler’s Final Solution.

RUSH: There you have it. That’s the crux of the book The Big Lie from Dinesh D’Souza, The Big Lie: Exposing the Nazi Roots of the American Left. Of course, everything he says here is accurate. Whether people want to acknowledge and agree with the connections made, that’s going to be another thing. But it’s not going to sit well with people on the American left who, of course, are portraying themselves as the exact opposite of all of this. Margaret Sanger and Planned Parenthood are perhaps best. There are two great examples of historical revisionism.

That is the Democrat Party — the original racists, the original segregationists — somehow have rewritten history and have ended up seeing themselves portrayed as saviors and rescuers. And the Republican Party, which did not let the Democrats get away with segregation… LBJ’s Civil Rights Act, ’64, would not have passed were it not for Republican votes. Major history revision. So is Margaret Sanger and Planned Parenthood. D’Souza…

For those of you who are Millennials and may be hearing this for the first time, I want you to not doubt me. Everything you’ve heard D’Souza say here is accurate, and particularly about Margaret Sanger. Margaret Sanger/Planned Parenthood was not about “choice” and it was not about allowing women to have control over their bodies. Margaret Sanger was the original eugenicist in this country.

She was from Australia. Many Americans joined her in this effort to create a master race. Margaret Sanger believed in getting rid of the sick, preventing them from “breeding,” as it’s said here. History has revised the original intent and objectives of Margaret Sanger as well, so as to prevent the Democrat Party from being harmed by the actual truth of any of these assertions.