RUSH: New York magazine. The author of the piece here is a woman named Amy Larocca. Now, based on her last name, what would you guess her hair color is? Dark hair? Now, you probably ask, “Rush, what does that matter? Come on, don’t do this stuff. We defend you all the time and now you’re going to talk about a woman’s looks because of her name?” Yeah, but I’ll tell you why. You want to hear the headline of this story? “The Politics of Blondness — How Fox News and Donald Trump have given blonde hair a new chapter. 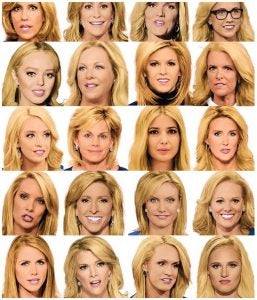 “Now, it is the color of the right, for whom whiteness has become a hallmark.” Here is a pull quote, and there’s a picture of every prominent blonde that has ever worked at Fox now or in the past. They’re thumbnail-type pictures. Let me see, there’s… (counting) Okay, so there’s 20 on one page, and 20 on another page. There must be 55 thumbnails of all blondes, and some of these women are not blondes. They’re red-headed but they’ve made them blondes in these thumbnails.

But the pull quote is, “Fox News and Donald Trump have given blonde hair a new chapter: Now, [blonde] is the color of the right, for whom whiteness has become a hallmark.” So Fox News and Trump secretly — secretly! They’re working on the power of suggestion that everybody who watches Fox is drawn to it because there are blonde-headed women doing the news and that is an automatic attraction for white supremacist Christians.

That’s how Fox is doing it! That’s how it doesn’t matter what the content is. The content makes it worse. Fox is attracting its audience by signaling (in almost an invisible way) that Fox is the home for white Christians with so many blondes. That’s what the story says, and it printed out… It’s a long story, prints out to six pages. I’m not going to read nearly all of it. But listen to this. After detailing what’s wrong with Fox content wise: “And then, of course, there are the politics of hair color.”

How many blondes do you see working at CNN or MSNBC? How come when blondes are working there, this kind of concern is never raised? “Attributes associated with whiteness — light skin, narrow noses…” I’m reading bigotry here. It’s online, open bigotry. “Attributes associated with whiteness — light skin, narrow noses — have dominated American beauty ideals as long as there’s been such a thing. Which means that blondness has always been … charged: The ’50s gave us Doris Day, who once said that her only ambition ever had been to ‘be a housewife in a good marriage.’ …

And then here comes the paragraph: “Fox News and Donald Trump have given blonde hair a new chapter: Now, blonde is the color of the right, for whom whiteness has become a hallmark.” And then there’s this: “Since only about 2% of the world has naturally blonde hair, being blonde is a choice, and the means used to get there can be very easy to read. As can the choice of which sort of blonde, precisely, one wishes to be.

“For every Carolyn Bessette-Kennedy, with expensive ‘buttery chunks’ from the Brad Johns salon, there is, somewhere out there, a Kendra Wilkinson or a Holly Madison, with margarine-yellow ringlets. The class implications are almost embarrassingly easy to spot.” Are any of you following this? So not only is blonde the color of the right and Trump and Fox News have politicized it, now we’re subdividing the kind of blonde! And we are deducing from that other things about the women.

They’re fake right-wingers. They’re pretend right-wingers! They want to make themselves look like they want to be married and housewife-oriented, and they know how to trick white Christian men into falling for that — and it’s all of the blonde hair! Fox has promulgating all of these subliminal messages by hiring blonde after blonde after blonde infobabe. This is how the left sees people. This is how they see the world. Everything is surface to them. Everything is color.

They haven’t the slightest idea or desire of getting to know who people really are. What’s the story I had last week? Oh, it was the DNA, the embryo DNA shopping they were able to do. It was all based on, “Your kid might be fat. Your kid might be redheaded. Your kid might have green eyes. You want that?” “No, I want a blonde.” That’s what that story was about. That was all about how liberals see people. Everything on the surface, that’s all that matters.