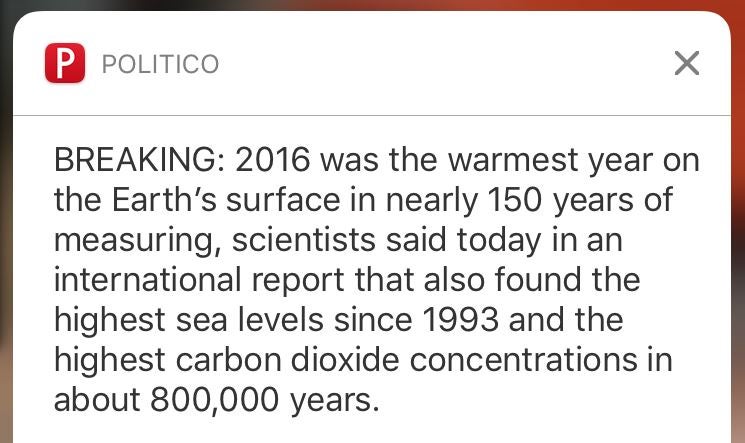 RUSH: Look at this! While I was just going through that riff on the fake news from the New York Times earlier this week on the supposedly shocking report that was only recently released that global warming is already happening… We find out that report’s been public. You could access it on the Web six months ago. Nothing was “suppressed.” Nothing was “secret.” Politico, with a breaking news alert to their subscribers: “2016 Broke Global Temperature Records Again.”

It was “the warmest year on the earth’s surface in nearly 150 years of measuring, scientists said today, in an international report that also found the highest sea level since 1993, the third year in a row,” blah, blah. “The annual assessment coordinated by the Oceanic Atmospheric Administration, the first comprehensive climate report released under Donald Trump, who has…” They’re still reporting this fake thing the New York Times faked. The Times has corrected their mistake. Not prominently but the Times has corrected it.

They’ve run it. It’s a humiliating thing they had to do.

Well, I don’t know how humiliated leftists can actually allow themselves to get. But they had to run a correction on this. But you know what? The rest of the media is still treating the original New York Times story as active and gospel, which is what Politico is doing. The thing is the report’s not true either. I’m just telling you, it is bogus. There hasn’t been any appreciable warming in the last 15 years, and sea level rise? Immeasurable. But this is what happens. Even as I was going through the riff, Politico sends out this next climate change alert to their subscribers.

RUSH: Meteorologists who pay attention to hurricanes every year are predicting an above-average amount of activity this year. They do every year. They haven’t been right in 11 years, folks. There actually is a season for hurricanes, June 1st through November 1st, or is it November 30th? It’s one of the two. If you live in the part of the country like we do that is susceptible to hurricanes you know it; you plan for it. You hoard water and toothpaste and canned goods at the grocery store, do all kinds of stuff. Just yesterday weather experts revised their forecasts to suggest that we’d see more than normal activity this year. The media will hype it and all that. A lot of people who live here will yawn, ho-hum, hear it every year. But the forecasting and warning will be helpful.