You Gotta Love It! Trump Doubles Down on North Korea

They have “been worried about Trump going off script for months, and now members of Congress are worried that his blunt and provocative warning to North Korea could lead to war.” What does this mean? It means that wimpism has taken over the Washington establishment, that wussism and wimpism and pajama boyism has taken over. North Korea is a zit on the butt of a pig and there’s no reason to be afraid of it. Would we run around acting afraid of a zit on a pig? “Mr. Limbaugh, they’ve got nuclear weapons!” Yet they can’t hit the side of a barn for crying out loud.

They’re all huff and puff, and they’ve been testing for months. It is well-established, well-established now. Kim Jong-un has been launching test missiles for months, for years. He’s been launching them in every direction, mostly into the ground. Each of them with a longer trajectory than the previous one. At what point is the launch we see not a test? At what point will one of these clown tests be an actual attack, say on Honolulu or Guam or San Diego, whatever? How would we know?

What are we supposed to do, just sit here and wait until the real one is airborne and hope that being gentle and compassionate and unprovocative will stop this lunatic from doing what he’s doing? Is that what we’re to believe here? We adopt the Obama pajama boy method here? That’s how the North Koreans and Iranians got their nukes, is this pajama boy liberalism way of life. “We must show them mutual respect.” What did Hillary say? We must respect our enemies. We must try to get inside their head and try to relate to them, blah, blah, blah, and that’s called “smart power.”

No, it’s not. It’s called how to lose. So the guy’s launching, he’s been launching for years, and every one of them is a test. But one of these days it isn’t going to be a test. And how are we going to know? So we’re just supposed to sit here. The mature thing to do is sit and watch and monitor? And, what, hope? We can’t pray because the left doesn’t believe in prayer. So what are we supposed to do to stop this guy? And the minute somebody comes up and threatens him and tells him, “If you’re not careful, you’re going to run to hell faster than you ever knew you could,” (Mattis did the same thing), this is provocative?

This is the way the left looks at crime, too. “Do not… Do not…” When it comes to bullies or anyone, “Do nothing! Do not say anything. We don’t want to make them madder. Do not try to catch the criminal. Don’t put the criminal in jail. Do not. It’s just going to make them madder.” The left is a bunch of sickos, and their version of human nature is destructive. One of these days, one of this lunatic pot-bellied dictator’s launches is not going to be a test. How will we know?

We just sit and wait like Obama did for eight years and like Obama allowed the Iranians get ready to do? So here comes Trump warning that little freak that there will be consequences that make him the bad guy. Seriously, Trump’s the bad guy in this? Damn straight! Because that’s right out of the left-wing media playbook: The Republican president is always the enemy. George W. Bush? What did they say about him? He was recruiting terrorists by the so-called torture in Guantanamo and the pictures of Abu Ghraib.

George W. Bush was increasing the number of terrorists. How? By capturing them and putting them in prison at Club Gitmo. That was creating more terrorists. What are we supposed to do? Sit around and let the terrorists terrorize — and if we don’t say anything about them and if we don’t try to stop them, maybe they’ll reduce their terrorism? We’re being led — we’re being advised — by a bunch of people who are going to get us killed with their ideas of virtue and peace and harmony.

And now we got the story that members of Congress are worried about Trump’s tough talk. The governor of Guam, Eddie Calvo, is a Republican. “Guam’s Governor Wants President Who Promises ‘Fire, Fury.'” Eddie Calvo said that the “160,000 people of Guam who are American citizens are concerned,” but there’s no panic yet. He said, ‘We encourage everyone to go through their lives and live them like you would any other day.'” Exactly.

The left wants us all to cower in fear and pray that the government will take care of us and protect us. Invest in the government to do everything, and be in fear — and then when the government takes care of you, make sure you say thank you and you show your appreciation in the ballot box. Eddie Calvo, the Republican governor of Guam says, “As far as I’m concerned, as an American citizen, I want a president that says that if any nation such as North Korea attacks Guam, attacks Honolulu, attacks the West Coast, that they will be met with hell and fury.”

Damn right, that’s what I want!

“Calvo also blasted Sen. Lindsey Graham (R-S.C.) for apparently being open to an all-out conflict in the western Pacific.” From the Daily Wire: “On Wednesday, Defense Secretary James ‘Mad Dog’ Mattis issued a warning to the [Norks] that made President Trump’s ‘the fire and the fury’ rant seem downright staid by comparison.” Here’s what Mattis said — and you’ll note that nobody on the left is suggesting that Mattis is warmongering or fearmongering.

You’ll note that nobody on the left is saying, “This guy is dangerous!” We don’t have any stories on members in Congress worried that Mattis is going to trigger a war. But here’s what is said. “The United States and our allies have the demonstrated capabilities and unquestionable commitment to defend ourselves from an attack. Kim Jong Un should take heed of the United Nations Security Council’s unified voice, and statements from governments the world over, who agree the DPRK poses a threat to global security and stability. The DPRK must choose to stop isolating itself and stand down its pursuit of nuclear weapons.”

“The DPRK should cease any consideration of actions that would lead to the end of its regime and the destruction of its people.” That’s some pretty sharp language from a guy who understands the role of the military — killing people and breaking things — and that is exactly what he has suggested would happen to Kim Jong-un. Nobody’s running around saying, “Oh no! (sobbing) Oh no! Did you hear what Mattis said? Oh, we’re going to die! The North Koreans are going to be scared and nuke us! Oh my God!” But when Trump says “fire and fury”? It’s all made up. It’s just… If you can’t tell, it has me so riled up. 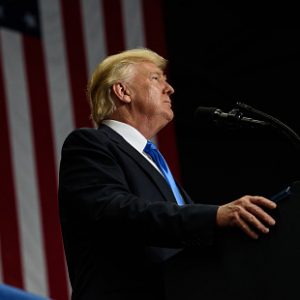 RUSH: Back to the phones we go. I appreciate all your patience. Livermore, California, the home of the Livermore Lab — Lawrence Livermore Lab — and the nuclear headquarters of the U.S. Ray, it’s great to have you. How are you doing?

CALLER: It’s great to be here, Rush, and the freak show was out in front of the lab yesterday with their anti-nuke celebration. It’s funny you should mention that. Trump-is-a-trigger-word dittos, Rush. Isn’t it ironic how the Democrats, Hollywood, academia, the conga line media — which is our so-called press — are allowed to say anything and everything about Trump, offensive speech, whatever. Yet Trump is the one who is out of control? Trump is the one who must remain measure? He must sit there, take it, and just shut up? It’s amazing that they call him feckless and bombastic at the same time, Rush. It’s an amazing thing to watch.

RUSH: This is actually a very good point, because you’re talking about more than just media types. You’re talking about Hollywood leftists and celebrities and bloggers and any number of other people who have national stature and acclaim and respect. They can say whatever mean-spirited, extremist, slanderous, libelous thing they want about Trump and he’s just supposed to sit there and take it. If he responds in a tweet or in any other fashion, then they jump on him for lack of decorum, lack of presidential stature. That’s exactly right. That’s a good observation.

CALLER: Well, I’m a student of the EIB Academy, Rush, for continuing education, and I appreciate what you’re doing here every day, Rush. You’re a national treasure.

RUSH: I sincerely appreciate it. (chuckles) That stuff embarrasses me, but I appreciate it. I really do. That is a good point. You stop and think about that. It’s rather obvious and hypocritical, but once again we’re stuck on the fact have to deal with the fact that hypocrisy never seems to stick to or harm in any way the left. Here’s the Washington Post story: “Trump Revives Fear About Possession of Nuclear Codes.” (Gasp!) This is just breathless BS.

RUSH: I just caught about 30 seconds of it, but this Trump mini-press conference out there was just dazzling, folks. He just double-downed on the North Koreans and warned them without question that they were headed for disaster if they attack anybody — an ally, us — anybody we defend, represent or love. You gotta love it, folks.