Fox & Friends Plays My North Korea Commentary for the President 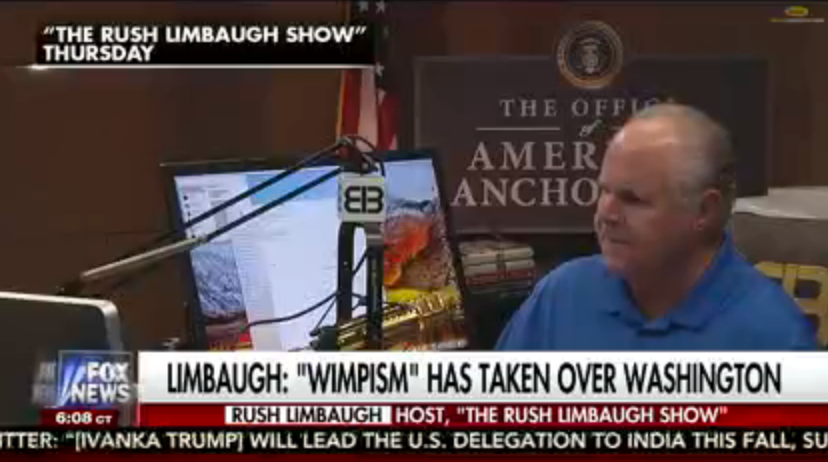 RUSH: They have “been worried about Trump going off script for months — and now members of Congress are worried that his blunt and provocative warning to North Korea could lead to war.” What does this mean? It means that wimpism has taken over the Washington establishment, that wussism and wimpism and pajama boyism has taken over. North Korea is a zit on the butt of a pig and there’s no reason to be afraid of it. Would we run around acting afraid of a zit on a pig? “Mr. Limbaugh, they’ve got nuclear weapons!” Yet they can’t hit the side of a barn yet, for crying out loud! …

What are we supposed to do, just sit here and wait until the real one is airborne and hope that being gentle and compassionate and unprovocative will stop this lunatic from doing what he’s doing? Is that what we’re to believe here? We adopt the Obama pajama boy method here? That’s how the North Koreans and Iranians got their nukes, is this pajama boy liberalism way of life! “We must show them mutual respect.” What did Hillary say? We must respect our enemies, and we must try to get inside their head and try to relate to them, blah, blah, blah, and that’s called “smart power.” No, it’s not. It’s called how to lose.

RUSH: They played that sound bite on Fox, which means the president saw it because he watches that show. So if he starts talking about zits on pigs, then we’ll know. Here’s the reaction. We have Pete Hegseth and Steve Doocy and Ainsley Earhardt reacting to that sound bite.

DOOCY: You’ve got Rush talking about — keep in mind, North Korea said by the middle of the month they’re going to try to shoot four intermediate-range missiles around Guam. And as Rush just pointed out right there, at this point they can’t hit the broadside of a barn.

EARHARDT: We’re sorry to make you think about a zit for breakfast. But it was so good, that sound bite, we had to play it.

RUSH: That was the reference of a “zit on the butt of a pig,” as an apt description of North Korea. We’re going to have people running around acting scared to death of it? You know what the ChiCom said, the ChiComs via their state newspaper? It’s kind of confusing. The ChiComs said (summarized), “If the Norks launch, then United States, you’ve got an open road to do whatever you want to do. But if you start, if you launch first,” the ChiCom newspaper said, “We’re going to have to defend our buddies and allies,” and I think that’s a crock. If we start it, they’re going to side with the Norks? I think they’d like to get rid of the Norks once and for all like everybody would, frankly.

RUSH: Now, this North Korea thing with the ChiComs — and this is the ChiCom state newspaper. What the state newspaper said is ostensibly the official position of the ChiCom government. That is how it is portrayed, and I’m not going to dispute it. I’ll just take it for what it is. This position that is articulated here is actually a new position for the ChiComs, and it’s actually — some would say it’s an improvement.

The former ChiCom position on North Korea was: If you end up hitting North Korea, no matter how it happens… If North Korea starts it — like if they launch a missile at Guam or Hawaii and you reply — we’re going to side with North Korea. That’s what the Chinese have always said to us. This statement yesterday is, therefore, new and represents, shall we say, an upgraded policy — ChiCom North Korea Version 2.0. In this policy they say, if the North Koreans are the first to act, then you, United States, have a free road, a free rein.

You can reply however you want. But the warning was, if you start it — if you launch the attack first — be advised that we, the ChiComs, will rush to the defense of our allies, the North Koreans. Now, folks, I don’t know anything anymore than anybody else does. As you know, I see things not through the prism of conventional wisdom in Washington diplomacy-speak but what seems like common sense to me. Common sense to me says that the ChiComs — with their investment in our national debt alone and the trading status, the trade relationship that we have with China.

I mean, just to give you one product (and this is just one): The iPhone. If iPhone manufacturing were removed from China, the unemployment hit to the Chinese government would be staggering. And they’re not going to risk that. No way. They’re not going to risk the money that’s involved, just in that one relationship. And there are countless others. You know how many tech products, gismos and gadgets are manufactured in China because it’s where the supply chain is. It’s not just cheap labor. It’s the whole ball of wax. There’s all kinds of reasons. 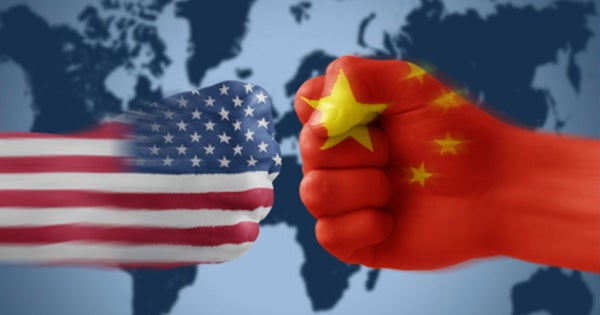 The Chinese aren’t going to put this at risk over Kim Jong-un! Now, they have to say they will. There’s this talk that the reason the ChiComs like North Korea is that it’s a buffer, because then you have South Korea — which, of course, is an American ally. Some would say a stronghold. The U.S. military has a presence there in South Korea. North Korea actually borders China on the northeast. The diplomats and the wizard of smart at the state department, for example (and they’re automatically accepted as wizards of smart by the media) say that the North Korea area acts as a buffer, a buffer between the ChiComs and such.

Buffers? Buffers in this day and age? A buffer for what? What, North Korea occupying the land it occupies is somehow going to limit American troops marching into China for crying out loud? That’s not going to happen. That’s not how warfare is going to take place today. All this thinking about the value that North Korea has for China? They don’t have any value. I mean, I think North Korea does export some coal. There’s no question that ChiComs need coal, but there will be other places to get it because Obama single-handedly failed to destroy the America coal industry; Trump is bringing it back.

But the Norks are primarily net importers. They’ve got nothing, including lights on in the dark. I mean, they’re that backward. I’m sure you’ve seen the nighttime global picture with city lights on all over the world. You can see the population centers of the world in this picture. You get to North Korea and it’s dark. There is one little speck of light, which is probably the spotlight outside Kim Jong-un’s apartment scanning the sky looking for incoming weapons. That’s about it — and, of course, the liquor cabinet light. The guy has to have his liquor cabinet lit up so he can find his way to it all day and all night. But aside from that, no lights on.

There’s nothing… The ChiComs are simply not… I don’t believe this. That’s what their newspaper says, but push comes to shove — and I’m not expecting us to be the first to launch here either; don’t misunderstand here. I just regard diplo-speak as a necessary but impractical reality. “Once action begins…” Once action happens, all this diplomacy that’s passed back and forth for decades becomes inoperative.