Has Trump Found the Sweet Spot of American Politics?

RUSH: There’s a fascinating piece here by F.H. Buckley. F.H. Buckley is a professor at the Scalia Law School at George Mason University, is the author of the book The Way Back: Restoring the Promise of America. He has a great piece here –which I’m not going to get into yet. I’m just setting it up. “How Trump Won, in Two Dimensions.” Let me give you the killer conclusion here: “The sweet spot in American politics…” I love this if this is true. I’ll tell you why I love it. You know Republicans, and you know them — in fact, you may even be one of these.

Republicans are famous for people that are, “Just leave the social issues alone, will you? Just don’t bring them up! Just talk about the economy. Every time you bring up social issues, we lose; we’re going to lose. My wife starts nagging me! Just don’t bring them up. Leave them alone. We don’t want to bring up abortion.” You’ve heard that? I hear it constantly. I mean, I can’t get away from it down here. It seems to be the definition of a Palm Beach Republican. 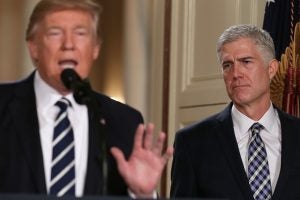 “The sweet spot in American politics today,” according to market research and polling and focus groups, surveys of voters… If you draw a circle, and they make four quadrants inside the circle where various issues overlap, he writes here, “The sweet spot in American politics is thus the upper-left quadrant of the double majority: economic liberals and social conservatives.” That is the “sweet spot” in terms of voters today. Mr. Buckley writes, “It’s the place where presidential elections are won, and the winner is usually going to be the candidate who won’t touch Social Security and who promises to nominate judges in the mold of Antonin Scalia.

“In other words — Donald Trump.” These people are “labeled … populists, but [Buckley] prefer[s] the term that Mr. Trump himself has applied to them: the Republican ‘workers party.’ They constituted nearly 30% of voters in 2016 and they split 3 to 1 for Mr. Trump. They’re “economic liberals,” which we would have to define (and the piece does that), and “social conservatives.” The point here is that it blows up this traditional, conventional wisdom of Republicans that social issues is the hill they die on. Wrong! It’s the hill they win on — or at least that Trump did.