RUSH: Grab sound bite number 29. Yeah, yeah. We’ll get to the early sound bites in the next half hour. This is Jim Clyburn, he is Democrat, South Carolina. He was on Wolf Blitzer’s CNN show this afternoon. He’s African-American, if you didn’t know. Congressman Clyburn is a member of Congressional Black Caucasians too. He’s a big guy in the Democrat Party. Wolf Blitzer said, “What was your reaction, as someone who has worked so hard in this area of civil rights all these years, what is your reaction to Trump in the press conference yesterday?” 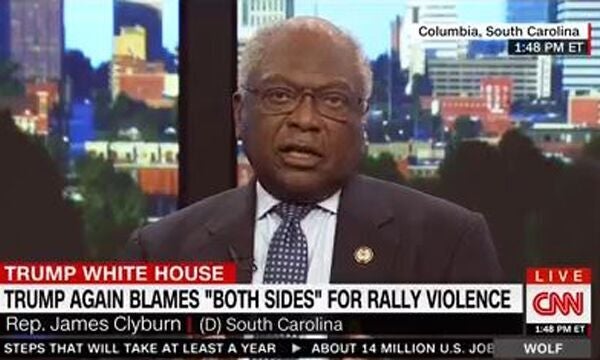 CLYBURN: We remember from our studies what happened in 1930s in Germany. I told a business group down at Hilton Head several weeks before the election that what I saw coming was a replay of what happened in Nazi Germany. The fact of the matter is, Hitler was elected as chancellor of Germany. He did not become a dictator until later when people began to be influenced by his foolishness. We just elected a president, and he’s got a lot of foolishness going on. And I’m afraid that too many people are being influenced by that foolishness.

RUSH: Name ’em. Name ’em. I just got some. I just watched somebody complaining that Trump’s making a big mistake here’s ’cause his base is only 30%. He’s got not big enough base to get his agenda done. That Trump needs to go out and broaden the base, needs to appeal to all kinds of different people. He can’t do it, the media’s never gonna allow that. Hitler had the media, Hitler was the media.

Comparing Trump to Hitler? They fired Jeffrey Lord for writing Sieg Heil in a tweet — they took it all of out of context. He was in a knock-down, drag-out with some Media Matters people who were accusing him of being a Nazi, Jeffrey Lord. Of course, the Democrats have moral authority. They’re victims, African-Americans, he’s a victim, he can do anything, call Trump anything. But he doesn’t work at CNN. CNN’s happy to have people that are not employees call Trump Hitler and call Trump a Nazi and so forth.

Here’s how it goes together. So Trump does the press conferences, he had this big weekend protest where the media portrays everybody out there as a Nazi or a Klansman supporting Trump. And here comes Clyburn, “Well, I feel like we’re watching Germany in the 1930s, got Hitler being reborn right before our very eyes.” This is more like if we want draw historical parallel, this is more like the cultural revolution in China when China became communist China. Trump doesn’t have anywhere near the popularity that Hitler had.

RUSH: Now, my staff thinks that I might be in a little bit of trouble. (interruption) Do you still think I’m in a little bit of trouble here? (interruption) If I get in trouble over this, it isn’t gonna be my fault. It’s gonna be because people do not understand history. Let’s put this this context, ’cause they’re probably right. Somebody’s gonna probably hear that out of context and say, “Oh, my God, did you hear what Limbaugh said? Oh, my God!” And they’re gonna run with it. Here’s the context.

Again, an audio sound bite was sent to me from James Clyburn, member of Congressional Black Caucasians. He’s on CNN with Wolf Blitzer, and he claims that what he saw from the minute Trump was elected was identical to what happened in Nazi Germany with Adolf Hitler coming to power. James Clyburn said, “I told a business group down in Hilton Head several weeks before the election that what I saw coming was a replay of what happened in Nazi Germany. The fact of the matter is, Hitler was elected as Chancellor of Germany.

“He did not become a dictator until later, when people began to be influenced by his foolishness. We just elected a president, and he’s got a lot of foolishness going on and I’m afraid that too many people are being influenced by that foolishness.” Okay. So what we’re looking at here is history repeating and Donald Trump is on the same pathway that Adolf Hitler was on. What is missing in this is Adolf Hitler — and people cite this as a warning. People use this bit of information as a warning against charismatic, puppet-master type of politicians.

Hitler was overwhelmingly popular in the early stages of the period of the Nazi, National Socialist Party. He was overwhelmingly popular. Trump is nowhere near that, and that’s all I was saying. It’s not historically inaccurate to say Hitler was popular. Now, if that’s all you hear me say and you hear no context, can you imagine what some leftist organization could do with that? “Did you hear what Limbaugh said? Limbaugh says Hitler was popular!” No, I didn’t.

In the context of a Democrat claiming that Trump is Hitler and that we’re on the same pathway that Trump is on his way to becoming Hitler, I’m saying Trump is never gonna be able to pull that off. Hitler had the media. Hitler owned the propaganda apparatus. Trump doesn’t own any of that. My point is there is no comparison. This is just an irresponsible comment from a Democrat who knows better. Clyburn knows better. But this is one of the oft-repeated allegations about Trump.

That he’s an authoritarian, that he’s dictator-like, that he’s using all these executive actions to get things done. Hey, you could have said the same thing about Obama. You could have said the same thing: Authoritarian. Who’s the guy that took over the health care system? Who’s the guy that tried to take over the American health care system — one-sixth of the U.S. economy — and bring it under the control of the government. I did not say nor did I imply — and you should not have inferred — that Hitler’s popularity was warranted. But it can’t be denied that in the early stages he was. That fact, as I say, is used by some people as a warning about certain other politicians who have those kinds of talents and access to propaganda apparatus.