RUSH: I want to go through line-by-line what Trump said. Because the media is reacting as though Trump lied and distorted and did so outrageously. And the media is beside itself. But as you go through each one of these things, what you’ll find is that Trump told the truth. He didn’t make anything up.

We’ll start with this. “What about the Alt-Left that came charging in?”

“Excuse me, excuse me,” the media started shouting the moment he said it. 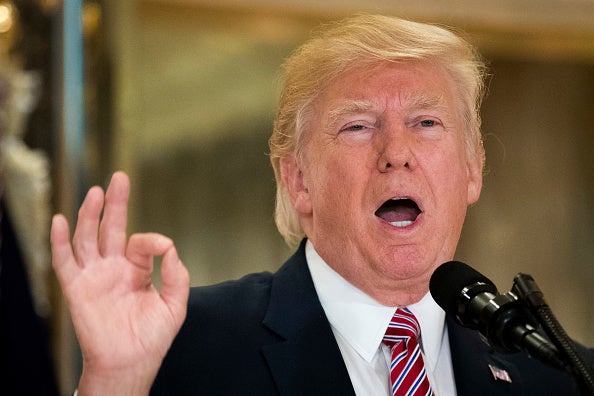 The Washington Post has an op-ed today encouraging them to violence, claiming that markets and words will not overcome white supremacy. How many white supremacists are there in this country? How many Nazis are there? How many members of the Klan? They’re not enough to elect anybody. It’s an infinitesimal number, and yet if you pay attention to the media, you would be led to believe that a significant portion of the Republican voter base is nothing but Nazis, white supremacists, and members of the Klan.

And I’ll tell you right now, it’s damn frustrating and it ticks me off to see cowardly right-wingers abandon this cause because they don’t have the ability to stand up and oppose this. They would rather not be tainted by the allegation, “Well, you know, we’re conservatives and they’re really making it look like we’re all a bunch of Nazis, I can’t stand that,” so you join the left. There aren’t enough of these people to elect anybody. There aren’t enough of these people to sustain the subscription of a conservative magazine.

And yet the media and the Democrat Party and all other of these groups on the left continue to get away with portraying these actual extreme, far left-wingers in the case of the Nazis, as mainstream conservative Republicans. And you got guys like Mitt Romney coming along furthering the belief by siding with the people making that allegation, what are you gonna do? Anyway, just a sample. There’s more of what Trump said that I want to go through with you line-by-line as we continue.

RUSH: What you’re looking at here is Barack Obama community organizing, and it’s being portrayed as legitimate protests conducted by morally superior people very simply repelled and repulsed by the piggish Donald Trump, racist, bigot Nazi, and so are you who voted for him.

That is throwing gasoline on a match or a match on gasoline. The Drive-Bys cannot abide this happen they think that’s insane. They think that’s absolutely crazy. ‘Cause of course the picture they’re painting is not only was everybody at the march in Charlottesville a racist, neo-Nazi pig. Everybody who voted for Trump is too.

Trump said, “This week it’s Robert E. Lee. I noticed that Stonewall Jackson statue’s coming down. I wonder, is it George Washington next week? Is it Thomas Jefferson the week after? You really do have to ask yourself, when does it stop?”

Folks, this is not about going after George Washington or Thomas Jefferson. These people are targeting the United States of America as founded. And it’s not about slavery. That’s the vehicle. That’s where they think they can get all kinds of support. Nobody wants to stand up for slavery. Nobody wants to speak positively of slavery. So you go after slavery and you’re gonna automatically have massive numbers of people agree with you.

It’s much easier to tell people we’ve got to get rid of our slave past, than to say, we want to transform this country into something it was never intended to be. If that’s what they told you they were gonna do, you wouldn’t be supporting ’em, just like you wouldn’t have elected Obama if he had told you what his actual agenda was like. And I don’t discount Obama and elements of his administration being involved in all of this. 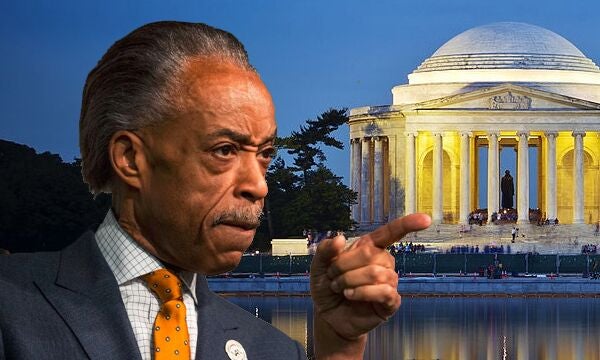 This is community organizing 101, what you’re watching here. This is Saul Alinskyism on parade being portrayed as spontaneous, heartfelt, loving and doting and for equality and anti-racist and anti- this and anti- that. And it’s bought and paid for, and in many cases it is organized. The whole thing is organized, from the vagina hat protest the day after the election to the airport protests after the travel ban to this, all organized.

Trump said, “I think race relations have gotten better or the same. Look, they’ve been frayed for a long time, and you can ask President Obama about that. He’s made speeches about it.”

“Did you see that? Trump is saying it’s not bad. He’s not saying it’s bad. He’s saying it’s just as bad with Obama.” Oh, those are fighting words. You tell people that racism was just as bad during Obama. In fact, not only is he right, he’s underselling it. Race relations got worse under Obama, and the evidence is right in front of our face today. Race relations frayed deeply under Obama, and I, El Rushbo, predicted that very thing to you, and I have been vindicated as being accurate in that prediction.

There was no way race relations were going to improve, for a whole host of reasons. A, Obama could not — no president can — address the grievances and fix them. Number two, any criticism of Obama and many critics would be valid, he’s the president. Presidents always have critics. Presidents are never universally popular, but criticizing Obama, why, that was said to be racist. And so the charge of racism increased individually, personally. More and more people were tagged as racists because they simply wouldn’t let Obama be Obama.

And so frayed relations continue to fray, and they got worse. ‘Cause Obama did not have as his first priority redressing black grievances. That’s not what his ostensible agenda was. He had to give voice to it, but that’s not what he was about. And over time, a number of African-Americans began to conclude or realize that. Their lives didn’t change appreciably for the better. They still had the same complaints about bigotry and racism as when Obama was not in the White House.

He was shouting at the media. “You’re changing history, you’re changing culture. You had people, I’m not talking about the neo-Nazis and the white nationalists, because they could be condemned totally. But you had many people in that group other than neo-Nazis and white nationalists, okay? And the press has treated them absolutely unfairly.” It’s all true. Nothing controversial with that.

“You had a lot of people in that group that were there to innocently protest and very legally protest. I don’t know if you know, they had a permit. That other group didn’t have a permit.” Oh, no, you criticize the left wing, the morally superior group, didn’t have a permit, you can’t do that. Trump did not say anything yesterday that wasn’t true. He did not lie about anything, and he wasn’t insensitive. He didn’t say anything that wasn’t true. And yet the media, the entire reaction was that Trump lied, Trump misrepresented, Trump’s a pig.