RUSH: Trump’s business advisory councils have disbanded. There are two of them, and they both disbanded. Now, there are competing tweets out there. One version of the story is that all of the businessmen told Trump as of today, they’re leaving. They want no part of him; they are getting out. The other story is that Trump actually ended the two groups by claiming he didn’t want the members to come under any more pressure. So competing stories over what happened. 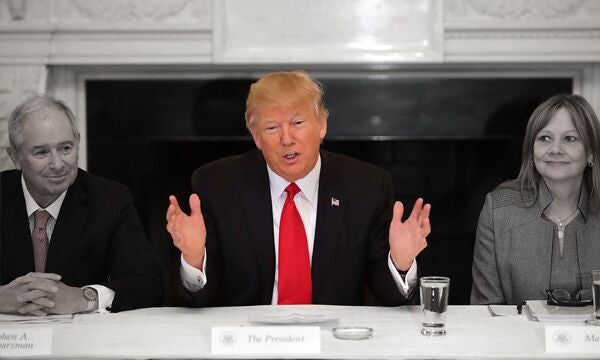 But the bottom line is that Trump’s advisory groups, CEOs and other businesspeople, are over. One was on manufacturing; one was on taxes. There’s a number of them. The only CEO that apparently didn’t volunteer to leave was Michael Dell. Stephen Schwarzman, huge, huge Republican donor, billionaire, Blackstone Group. The Merck guy, he was out of there. The Under Armour guy, he was out of there. These people fled for the hills yesterday. Today the news is that everybody told Trump, “We don’t want any part of this, and we don’t want any part of you,” and they quit.

That’s probably the version the media will go with. Trump has tweeted that he disbanded the two councils because he did not want the members to be facing any more public pressure than they already are.

RUSH: I am America’s Real Anchorman, the Doctor of Democracy and America’s Truth Detector. Rush Limbaugh here, where we constantly battle the left. If you ever have trouble figuring out what we do here, always fall back to that. It’s all about doing battle with the left every day. It is a battle that will never end. The left is never gonna go away. Let me illustrate it for you.

How many of you still are under the belief — still hold the belief — that Big Business is populated by a bunch of right-wing conservative free-market guys who don’t like Big Government and want it out of the way of their business? Thirty years ago, that might have been true. Twenty-five years ago, it might have been true. But I would say 15 years ago it began to change, maybe 20 — and certainly eight, nine years ago it ceased being true. Something replaced it.

Big-time CEOs became either crony socialists or full-fledged, out-and-out leftists. The left has infiltrated much of our culture. They own, for example, Hollywood. Now, stick with me on this. You say, “I’ve heard this before.” Stick with me. We always offer new perspectives here. You think you’ve heard it before, but if you listen carefully, you’ll realize there’s always something new. The left owns pop culture. And in a sense, this might help you to understand why they’re so mad. If I were in their shoes, I’d be livid. Look at everything they own.

They own Hollywood. Isn’t it interesting that Hollywood is bombing big time? At least box office Hollywood had one of their worst summers of all time. They own the music business, and the music business is undergoing major upheaval from purchasing music to renting it via streaming. They own the publishing businesses — and, by the way, do not discount the influence of the Harry Potter books on turning young Millennials into little snowflakes who believe all they have to do is grow up and they will magically acquire whatever they want.

They own the media. They own large swaths of the judiciary, meaning a whole lot of federal judges out there are dyed-in-the-wool liberal activists before they are even judges. They own a lot of the corporate boardrooms now. The left is everywhere, and yet they still couldn’t beat Donald Trump. As successfully as they have infiltrated the fabric of American culture, they still couldn’t find a way!

With African-Americans, with transgenders, with homosexuals, with women, the feminazis, all of the left-wing special interest groups combined with the ownership of education, pop culture, books, movies, TV and the media, and they still couldn’t come up with enough votes to put Hillary Clinton’s butt over the finish line. Donald Trump still won. Hatred! Hatred beginning to election night, and it has done nothing but intensify. It’s done nothing but become more raw and more vicious. There’s nothing out there to ameliorate the hatred because they can’t even win midterm special elections.

The Trump travel ban, all the things that they thought they were going to defeat Trump on continues (in the real world) to triumph. There is great news associated with the Trump presidency, but you will never hear it, because it is being squelched and covered over and ignored by the Drive-By Media. The economic news, the new business growth, any number of things — the trade deals, regulations, any number of things — that are dramatic improvements over him the last eight years are not being reported. They are, in fact, being ignored, and instead what are you getting?

They’re protesting Trump in Chicago. They’re killing people over Trump in Chicago! Whatever is going wrong, everybody’s doing it because they hate Trump. That’s the news. Of course, there is no news. That’s the daily soap opera: Everybody hates Trump. You are supposed to hate Trump. If you voted for Trump, you’re a fool and you’re an idiot — and you’re probably a Nazi or you’re a Nazi sympathizer or you’re a Klansmen or a Klan sympathizer and you are a white supremacist. That’s the news, because that’s who elected Trump.

They can’t get over the fact that they lost with everything they control. They think they should run everything simply because they control the media. The media alone, in their world, in their view, means they should dominate everything else. And they have not been able to come to grips with the fact that they lost. So they’ve had all these excuses like the Russia collusion. This, since this past weekend, is just the latest iteration of the community organizing. These protesters are no different than the protesters that met Trump’s inauguration.

Remember those feminazis wearing the vagina hats, and then when the Trump travel ban came magically millions of people materialized at American airports — supposedly spontaneously — to oppose the bigotry and racism of Donald Trump. This is all the news has been since last November. And, of course, after Trump was inaugurated it’s been intensified. This is it, and they still can’t get the guy out of there. They still can’t prevail! Now they’re succeeding in getting some of the conservative intelligentsia to join them in denouncing Trump.

Now the Trump business council executives are leaving in huffery and puffery, and are they being treated royally by the Drive-Bys! So Trump is being portrayed as further and further isolated. The media is demanding that he get rid of all of his inner circle advisers who are also members of the Klan, secret Nazis, and white supremacists. What you’re supposed to end up asking after all of this (at some point in time) is, “How did this guy ever get elected?” You who voted for Trump, in the sense that you’re being targeted by all this, the effort is to get you to renounce Trump as well.

It’s to get you to say, “You know, I voted for Donald Trump but, boy (sputtering), I — I — I — I tell you, I didn’t know Nazis are gonna be part of it! I can’t handle that.” That’s what they want to hear from you, and so they start out in hysterics, and with every effort to get rid of Trump, the hysteria intensifies because they fail. They haven’t gotten rid of Trump because of Russia, so now they’re relying on Mueller and whatever he’s doing to get rid of Trump. I have no doubt that an actual coup is being talked about somewhere by somebody. I have no doubt about this. (interruption)

No, I don’t know who. Look, I know people, I know human nature, and I know what’s going on. You do it in your own. Let’s say you work someplace where you think the boss or your CEO or your manager or whatever is just off his rocker. How many of you over the course of your life have had a meeting with fellow coworkers to plot a strategy and figure out, “What are we gonna do about this? This is… This is…” This happens. I’m just telling you, at the upper levels of government it does too.

I don’t know who the players are. But I can tell you, you probably see a number of them on television every night or at least once a week, and they’re probably meeting with each other, discussing, “How we can get rid of this guy?” They’re doing it on the basis, “The guy’s insane! This guy’s lunatic. This guy’s gonna get us killed. This guy should have never been elected. Oh, my God!” In addition to saving the establishment and all this, they can’t believe what’s happened here.