RUSH: You know, yesterday on this program we made mention of the fact that on the CBS Evening News on Tuesday, the entire broadcast was devoted to Trump and Charlottesville — the whole newscast. There was not one other story. So last night — I don’t know if the suits at CBS heard us talking about that or not, but they decided to go out and try to find some Trump supporters, gave them some time maybe to balance what they had done the previous night. They found two black and one white Trump supporter, three people, and I want you to hear what these sounded like. The names involved here, correspondent Mark Strassman, the three female supporters for Trump are Janelle Jones, Ellen Diehl and Lucretia, one of my all-time favorite female names, by the way, Lucretia, not to be confused with Lucrezia, Lucrezia Borgia. This is Lucretia, as in DeVille. Anyway, these three women, two black, one white, CBS found them to talk about Trump controversy, here’s the first bite.

STRASSMAN: Has your support for Trump lessened one bit?

DIEHL: Not at all.

STRASSMAN: Not one bit?

JONES: No, I don’t look at him as, you know, my pastor or my moral leader. I look at him as the leader as it relates to governmental issues.

STRASSMAN: When you saw Charlottesville, what did that say about where we are as a country? 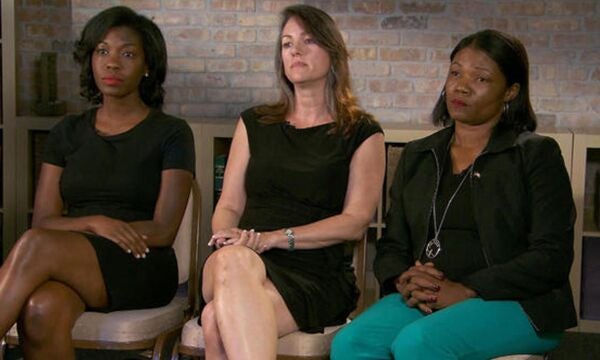 HUGHES: No. It’s history. I wasn’t born back then. You wasn’t, either. So why is that affecting us? If anything, we should grow and learn from it just like Martin Luther King said. You don’t judge people by the color of their skin. You base that on their character.

RUSH: See, these people understand something here. And these people at CBS, I guarantee you they were genuinely shocked that they were able to find them, and then what they said. Remember people in the media do not really think people like this exist. They have an arrogance about them that is just automatic. Whatever they believe and think, they assume 80% of the country is the same way, and that’s how they go about reporting these stories.

But this woman, that was Lucretia, by the way, who said, “No, I wasn’t born back then, you weren’t either. Why is that affecting us? If anything, we should grow and learn from it like Martin Luther King said.” What does she know? She knows that black people who were never slaves are fighting white people who were never Nazis over a Confederate statue or statues that Democrats put up. And now for some reason the Democrats don’t want to live with what they did and it’s now become Trump’s fault. And these people are not buying it. Sound bite number three. STRASSMAN: How do you explain what your support is for a president, given the criticism that he’s had on this race issue?

HUGHES: I think for myself, period. Nobody’s going to tell me what to think or how to think. I’m not gullible and I’m not blind. It’s my decision if I’m going to support someone or not, not go by what other people has to say. And to me, what I’ve seen, and what I love, I’m not– he’s not going to lose my support any time soon.

JONES: I’ve been a Republican before Donald Trump. I will be a Republican afterwards. I honestly don’t think we will see this issue of racial divide addressed until we remove identity politics out of the political process.

STRASSMAN: These Republican women say if a president deserves blame for making racial tensions worse, it’s Obama, not Trump for the identity politics they say Democrats have practiced for the last eight years.

RUSH: This is Bob in Spokane, Washington. I’m glad you waited, sir. Great to have you here.

CALLER: Hey, thanks, Rush. Arturo Fuente dittos to you. The press still doesn’t understand Trump and his voters. His third presser was brilliant. He came out and dangled some shiny bait in front of them and even spiced it up with, “I’m not done, fake news,” and that makes ’em angry — you can hear ’em yelling — and angry people make mistakes. If Trump had come out… He exposed fake news, and if he had come out and said, “The reason is because they’re leftists,” everybody would have pooh-poohed it. But he’s got the press self-destructing and they’re exposing themselves. When they look in the camera with a straight face and tell me there’s no violence from the left, or, “Okay, it’s understandable,” or worse yet, “It’s justified,” I know what they are. They told me, and Trump didn’t have to do it. He’s got them exposing themselves for what they are.

RUSH: I am glad you called, because I have actually been sitting here… As I watched the Trump press conference — and this is how it happens, by the way, folks. I’m watching the Trump press conference, and I’m cheering it. I will admit it, I cheered it this thing on Monday or Tuesday, the last one. The days run have together. I’ve missed the days last week. I thought last night was Tuesday night and it wasn’t. Anyway, I thought it was exactly what’s called for, not talking about any guff. Just fire right back at these people.

You know, trying to do it their way one day then not getting any credit. He went out and he condemned who they told him to condemn and they said, “It doesn’t count! We don’t think you mean it.” So he meets them the next day and basically tells them to go to hell and here’s the way it really is. “There’s violence on both sides, and I condemn it,” blah, blah, blah, blah, blah — and I just knew… Folks, I just knew Trump voters are cheering when he does this.

When they watch that, they’re cheering. But then it’s over and here comes the media, and it is an absolute crash. It is a hysteria! It’s as though Donald Trump has just created the greatest gaffe in the history of politics and everybody thinks so. I put myself in the position of Trump voter watching this, and I know that Trump voters get angrier and angrier at the media. They don’t watch it much anymore. But they’ll see something like that, and I don’t think the media has the slightest idea how they are failing at destroying Trump with his own voter base. They’re failing big time.

CALLER: Hi. Mega dittos, Rush. I just wanted to make a quick point. When I voted in November, I was not a reluctant Trump supporter, but I wasn’t a huge supporter. But I also voted not only for him, but I voted against the media. And every time the media spews out some lie or accusation or speculation or has something to say and never is able to back it up, I become a bigger and bigger and bigger supporter. There’s actually I bet quite a few who are like me —

RUSH: You know what? I think that’s exactly right. And of course when the media hears this story, which I think they hear a lot, they laugh at it, take it as a badge of honor. They don’t realize how big a deal it is that they have become something about which people vote against. I wish I had more time, but I’m out, Susan. I misread the clock here by a minute. But thank you. Thank you very much for calling.