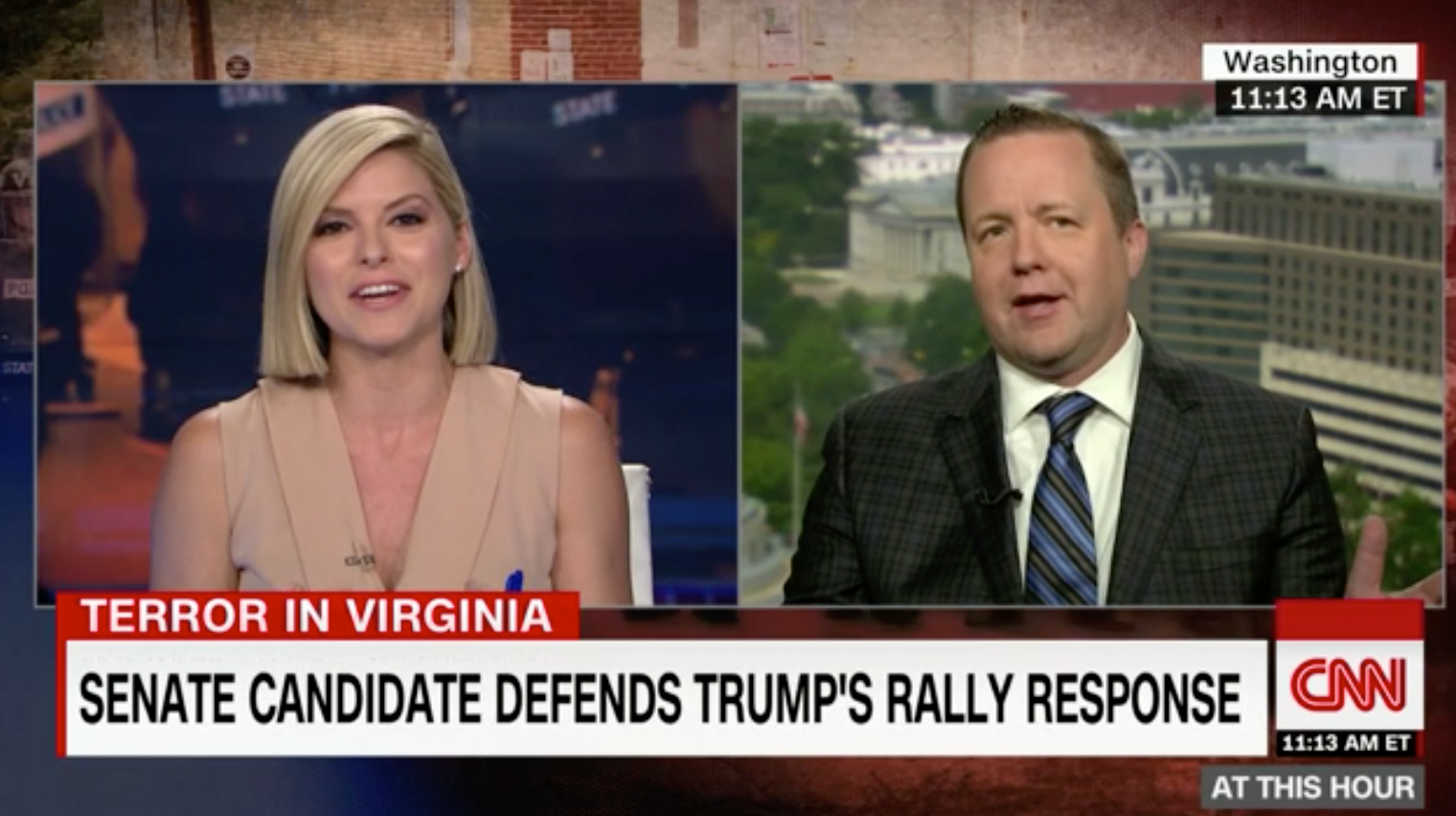 RUSH: Some awesome audio sound bites are coming up, including Cookie found the exchange on CNN I was talking about where some poor Republican was being challenged to condemn practically the sun coming up if it came up over Nazis. “Do you condemn…? Do you condemn…?” “Yes, I condemn, but I also…” “You do! Do you condemn…?” It’s incredible. In fact, the infobabe got so frustrated she told him to shut up and let her talk at one point. It was Kate Bolduan, one of the infobabes at CNN who was devastated that Hillary lost.

You realize these people still haven’t gotten over that? I mean, that’s driving a lot of this, their taking it personally. I mean, Hillary was their babe, euphemistically speaking. Hillary was their girl. Hillary was it, man! It was gonna be so much fun! They were gonna actually have a Democrat in there that threw parties at the White House that everybody was going to go to. It was going to be so much fun; Washington was gonna come alive. It was gonna be great, great day — and it all went up like Spandex pantsuits. Just flamed out.

STEWART: Neither CNN, the mainstream media or any Democratic politician has come out — and not even establishment Republicans have come out — and condemned the far-left group Antifa.

BOLDUAN: Is it possible that it’s because someone died who was counter-protesting?

STEWART: So what you’re saying, Kate… You’re trying to use this poor woman’s death to say that Confederate monuments should be taken down.

BOLDUAN: I’m sorry, is that what I said at all?

STEWART: There’s no equivalency there. There’s nothing there.

BOLDUAN: (snickering) I’m sorry, is that what I said at all?

STEWART: — will not stand —

STEWART: — up against these left attacks.

BOLDUAN: Corey, if we could all be a little intellectually honest here.

BOLDUAN: In no way am I conflating the two.

STEWART: Coming from CNN (chuckling), I just don’t see that at all.

BOLDUAN: I am the anchor of the show! I’m asking the question! Hold on a second.

RUSH: And it’s not over yet. Here’s the rest of it…

STEWART: So why are you bring up poor woman’s death —

STEWART: — and trying to say that that’s somehow, uh — 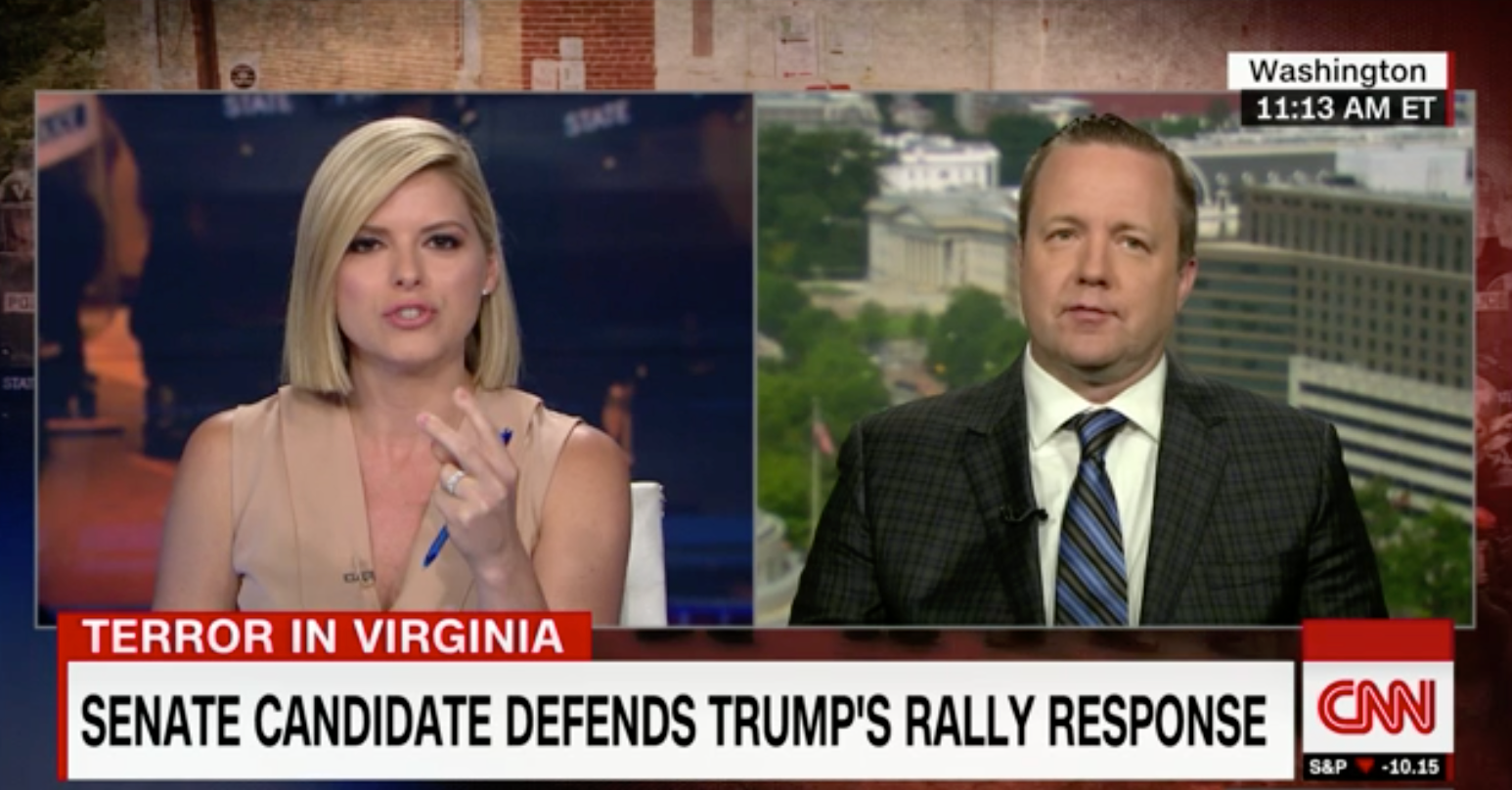 BOLDUAN: Stop talking! Stop talking for a second. You’re the guest on my show. In no way am I trying to do anything with this poor woman’s death that has anything to do with the statue. It stopped being about statues when people showed up with swastikas.

STEWART: It stopped being about statues when the left came and started the violence, and the violence occurred by both sides, including the left! Where is the condemnation of Antifa, a far leftist group that espouses violence?

STEWART: I’ve already condemned it. And, by the way, so has every other Republican under the sun.

She continues to ask, “Have you condemned? Will you condemn?” And this is resoundingly offensive to me. I don’t get offended but I’ll say that I am here because people understand it. This automatic assumption that whenever there’s violence that Republicans must condemn it, otherwise people will never know that Republicans don’t approve of it is just the biggest damned insult, and I’m glad somebody here tried to throw it back at them.

RUSH: By the way, journalists are having to admit that the Antifa or the Antifa protesters attacked even journalists. They would like to be able to ignore this, but we’re gonna make that hard for them.