How the Drive-Bys Look at Terrorism in Barcelona

RUSH: Barcelona. I haven’t commented on this for a reason, folks. But I’m gonna now because Snerdley’s (yelling), “You’re not talking about Barcelona!” In Barcelona, we have an amazingly similar looking event here. A driver went on a tear in an automobile down a highly populated street. Lots of people; a lot of pedestrians. The guy mowed down people left and right. The numbers are one dead, 32 injured. I’m keeping up with it visually here. I’m not able to listen to any of it. So I asked the staff, “Are they claiming this is an ISIS attack?” 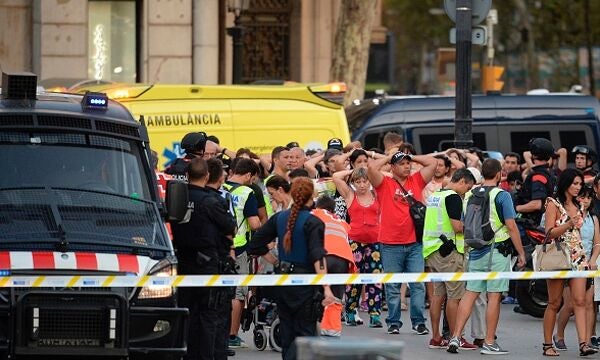 (chuckles) They haven’t credited ISIS yet, is that right, and ISIS hasn’t claimed credit yet? So right away, we don’t know who did this, and yet the networks are going with this wall-to-wall, and they’re showing the bodies, and they’re showing the carnage like you’ve never seen before? Why do you think this is? (chuckles) Don’t make me say it. You know what they’re hoping for. They’re hoping this is a copycat of Charlottesville. They’re hoping that they’re gonna be able to report today that right-wing nationalists, members of the Klan or (maybe even better) neo-Nazis went crazy in Barcelona.

That’s what they’re hoping they’re gonna be able to report. Do not doubt me on this. The fact that they’re showing much more mayhem and human suffering than they usually do, and the fact that nobody’s talking about ISIS yet? (scoffs) You know as well as I do that in all of these assignment editor little cubicles and in these editor cubicles and wherever these people in the Drive-Bys get together, they’ve got their fingers crossed, and they are hoping against hope that this is what they want it to be.

RUSH: So they got a suspect now in Barcelona, and since they’ve got a suspect, I mean, the suspect looks like what you would think an ISIS member looks like. And therefore there’s disappointment that’s gonna settle in that the Nazis, the neo-Nazis over there didn’t do this. White supremacists didn’t do it; ISIS did this. This has a specific reason behind it, too, folks. The media worldwide is in the business of avoiding the truth on practically everything because, in most cases, the truth is actually an indictment of what they believe.

In this case, just like other attacks in Europe, this is a result of wanton, massive open borders throughout the European Union because of politically correct reasons or suicidal reasons, who knows what these people conjure up as their reason for doing things. This is classic. It’s like Paris. It’s like any other terror attack in the European Union, and it’s directly traceable to open borders, immigration plans from years and years and years ago that I’m sure were rooted in what they thought were compassion and understanding.

And so they say, “Yeah, you know, you’re right. So let’s open the borders and let’s let anybody in who wants to come in because we’re really at heart good people.” And this is the result of it. White guilt is behind much of what’s going on, fostering it, promoting it, and then living off of it.

The truth of the matter is that all of these destructive things are the result of liberal and left-wing and socialistic, communistic policies. But since the media is that, they’ll never, ever shine the light of truth on themselves, and they’re always gonna be looking for their political opponents to blame.