Leftists Are Tearing America Apart While the GOP Stands Aside

RUSH: Themes to today’s program, the media is dividing this country and tearing it apart and, because of fear of the media, way too many on our side are unwilling to stop or even try to explain or oppose this. Identity politics, which we have been focusing on in recent weeks, intensely in recent days, is the primary weapon being used to divide the country. Nothing new about it, but it is reaching new heights. And what is going on is so far from reality that it’s tough to actually make sense of it. 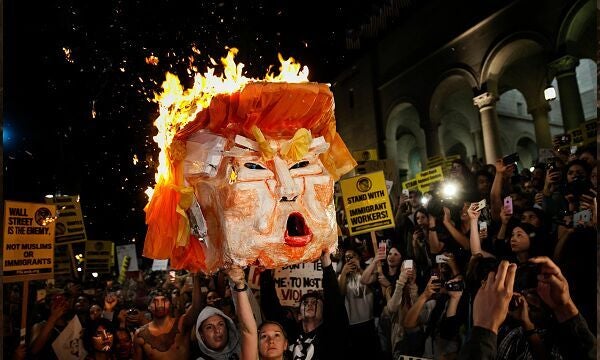 I mean, here’s one way of looking at this. (interruption) No, I’m gonna answer the agenda question. (no audio) So I ask an intriguing question, everybody wants the answer. Coming back to it. You could if you were brave and courageous. Black people and white people who were never slaves are fighting white people and others who were never Nazis over Confederate statues erected by Democrats — and somehow it’s all Donald Trump’s fault.

That would be one brief summary. Now, that summary, if uttered to a CNN infobabe would be met with a meltdown. I watched a meltdown today. You know what happens? You know what CNN is? CNN goes out and they find some sucker Republican to accept an invitation to appear. The sucker Republican shows up and here’s the interview, “Do you condemn, do you condemn the white racists?”

“Yeah, I do. But I also condemn the violence on the left.”

“Yeah, yeah, I condemn it all. I condemn violence by everybody committing it, including the Antifa.”

“You think there’s violence on the left? That’s outrageous. That’s racist. Do you condemn?” That’s what it’s become, folks, do you condemn, will you condemn. What underlies that is for way, way too long there has been this assumption that has been allowed to settle in, that conservatives and Republicans are racists. It’s an insulting question. It ought to be met with derision. “Do you condemn racist violence?” What kind of question is that? Who do you know that supports it, folks? And yet by virtue of asking the question, the intention is to brand and characterize whoever it is you’re asking that question, “do you condemn,” as though we don’t know. As though it may be up for grabs.

We don’t know if Republican Congressman X or Republican Senator X actually condemns white racism, actually condemns Nazis. But of course the question is never asked of the left, “Do you condemn Black Lives Matter and the murder of five cops in Dallas? Do you condemn Black Lives Matter in the tearing up of Ferguson and Baltimore?” You can’t ask that. Why? Well, because the assumption is that all of that action is entitled.

All of that destruction, including the violence against cops, why, that’s understandable. Why, these people are victims, and they are simply addressing their grievances, and we must understand. Meanwhile, “Do you condemn the KKK?” And it never ends. And that’s what CNN has become.

If you go to the Drudge Report — let me turn to the right so I can have the Drudge Report in my eyes here — tax reform impossible, with a question mark after it. It’s a question somewhere, CNBC, I don’t know where it is, I don’t remember the link. Doesn’t matter. If there’s one story, there’s 10. Tax reform impossible? You know why? Why is it impossible? Well, because nothing can happen with Republican votes alone in the Senate. The Republicans are going to need some Democrats, and that’s just not possible. Exactly.

Advancing the economic plight, advancing the economy, advancing improving economic circumstances for America will not get any Democrat votes. Exactly right. Except it won’t be portrayed that way. No, the reason why the Republicans won’t get any votes is because they’re so racist. They won’t condemn the KKK, and they won’t this condemn the Nazis, and they won’t condemn the white supremacists. Even though they do, and even though the president did, multiple times, it’s as though the condemnations never happened.

The questions continue to be asked, and as such, the Republicans have no brand. They have no credibility. They can’t get anything in their agenda done because they won’t condemn whatever went on in Charlottesville, or because they wish to condemn also the violence perpetrated by Black Lives Matter and the anarchists and the Antifa people and so forth. Which, if you do that, CNN and others just jump right down your throat as though you’re a bigot and a racist for daring to point out that the violence everywhere in this country often starts by people on the left. And not only is the violence in this country often started by people on the left, they are the sole practitioners of the violence in 99% of protests.

Now, look at the stories that follow this today from TheHill.com: “GOP Fears Damage to Brand from Charlottesville — Republicans worry that their candidates could pay in the 2018 midterms for the continued controversy over President Trump’s remarks on the deadly violence in Charlottesville, Va.”

What did Trump say? We went through it line by line yesterday. We went through everything Trump said, in the controversial Monday press conference, or Tuesday, whatever day it was. I thought all day yesterday was Tuesday. I find out today is Thursday, so somewhere in this mix I lost a day. So whatever day that Trump went to Trump Tower to do his press conference, we went through that line by line. And because he said there was violence committed by both sides and because he said there are fine people on both sides, hysteria.

It was a genuine unhinged hysteria from all over the place, in the Drive-By Media and in Washington. And however the media goes is how the Republican Party is gonna go. Let’s look at these CEOs, for example. These CEOs make a big show out of leaving Trump’s two CEO committees or panels, whatever they’re called, but they’re not gonna stop working with Trump. This is all for show. This is all to get the headlines and photo-ops. Look at this brave CEO telling Trump to put it where the sun don’t shine. And that CEO, he just told Trump what-for. And they’re being applauded by people all over. They’re gonna continue to work with the Trump administration ’cause Gary Cohn, who’s one of Trump’s guys, is a Goldman Sachs guy, and they like each other, and they’ve got an agenda.

These CEOs are not leaving the Trump administration, and they’re not abandoning their opportunity to influence it. They just make this big show out of doing so in order to gain PR credibility or whatever. But they’re still gonna be on the phone calls and they’ll still be talking to all of these people in the administration, because that’s what CEOs do. CEOs now, rather than compete against competitors, CEO’s try to get tight with people in government. It’s called cronyism. They’re not gonna abandon that.

They’re not gonna abandon the opportunity to have a close relationship with powerful people in the administration. But they’ll make a big show out of abandoning the Trumpster and get all kinds of great PR credit for it. Republican Party the same. Media goes crazy on Trump, Republicans say, “Oh, God, there goes our brand. Oh, jeez. We’re never gonna win again.” And they abandon Trump publicly. But in their case, they really do. They then go silent. And there isn’t any pushback against any of this, and the problem there is the pushback is not just against Trump.

Let me go back to this headline here. “GOP Fears Damage to Brand from Charlottesville,” and here’s the lead. “Republicans worry that their candidates could pay in the 2018 midterms for the continued controversy over President Trump’s remarks on the deadly violence in Charlottesville, Va. Trump’s equivocation on how much blame should be put on white supremacist groups for the violence sets up a challenge that’s difficult for Republican candidates to avoid — and one that Democrats are eager to bring up.”

There wasn’t any equivocation! Sorry for yelling. Another big media lie. There wasn’t any equivocation. Trump said there was violence on both sides, which happens to be the truth. Ninety percent of the violence in protests and in riots in this country is committed by the left. It’s committed by Occupy Wall Street. It’s committed by Black Lives Matter. It’s on videotape. It’s not even arguable. And yet we’re now being asked to believe that there isn’t any violence on the left.

There’s all kinds of people who are not us on the left, except they are the left. Milbank misses it. They are the left. What it really is, folks, it’s not “[t]here are Nazis, and … the rest of us.” There is the media and the Democrats and their associated hate groups and the rest of us. That is the characterization. So here comes this story about the Republicans fearing damage to the brand. “Republican campaign chiefs raced to distance themselves from Trump’s decision not to single out white supremacists…”

He did single ’em out! He singled ’em out in the second press conference on this. (laughing) He did! But the media didn’t let him get away with it. The media said, “You didn’t mean it! You’re only doing it because we shamed you into doing it. So you’re not gonna get any credit from us! You didn’t mean it, it isn’t in your heart, so it doesn’t count.” So Trump went out and did a third press conference in total frustration. “Okay, screw you! You want to know what’s up? Here’s the deal,” and he unloaded, and everybody had a cow. 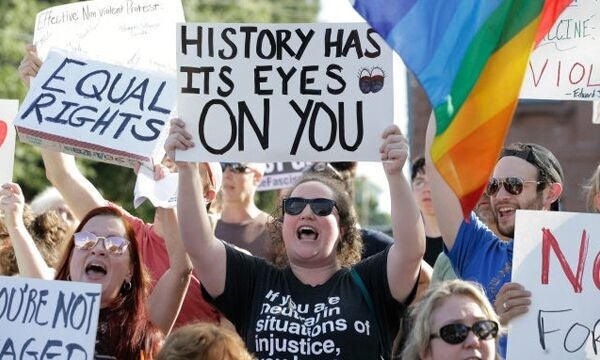 If I may be bold here, if I may be helpful, Republicans, the idea here that you fear damage to your brand? You’re about 30 years late in realizing this, and the reason that you have ongoing fear of your brand is that for the first time it somebody’s fighting back against these allegations, and that’s what’s making you nervous. You’ll note that it’s Donald Trump fighting back against all this that’s really what makes the Republicans nervous. The Republicans have never pushed back on this. You know it as well as I do, especially you who have voted for them based on their promises to push back, to fight back.

For 30 years, the Democrats have been able to call Republicans anything with impunity — racist, bigot, sexist, homophobe, and add on to that — and there’s been never any pushback. All there is, is Republicans trying to kiss up to the media so that they individually are not included in the smear. Well, this is what pushing back looks like, just like this is what trying to strip power away from the establishment looks like.

This is what it looks like when you push back. It was never gonna be easy, and it was never gonna be pretty. Somebody is trying to save the Republican brand by defending it against all of these smears: Racism, sexism, bigotry, homophobia. Too many Republicans have been conditioned to go along with the allegation and to ask for exemption from it.

RUSH: I’m really struck by Republicans fear “damage to their brand.” Have they missed the assault on their brand the last 30 years? (snorts)