They’re gonna say that Bannon realized this whole thing’s up. It’s over, and he wanted to go out. But he didn’t want to resign ’cause they’d call him a quitter. So he goes and gives that interview with that American Prospect — this left-wing rag — and undercuts Trump on North Korea and undercuts Trump elsewhere, and Trump fired him. “Bannon wanted off there. It was so bad in there that not even a guy sympathetic to the alt-right can put up with the insanity going on in the White House.” Then they’re gonna be seeking out Bannon for interviews.

He’s gonna get book deals. He’s gonna get movie deals. He’s gonna get TV show deals. “Tell us the truth about what went on in there. Tell us how you had to tell Trump what time it was every day. What time did you go to the residence to get Trump out of bed to make sure he was at the Oval Office on time?” This kind of stuff. (interruption) You doubt me? This is exactly what’s gonna happen. They’re gonna try. There will be some people that try this. The point is Bannon’s gonna become revered and respected because Trump fired him.

And, if Trump fired him, it must mean that Bannon had seen the light and just could not continue. “He had to get thrown out. He couldn’t quit. That’s not good. You don’t want to look like a quitter.” Grab audio sound bite number 18. This is Robert Kuttner. Robert Kuttner is a dyed-in-the-wool leftist, and he runs a publication called The American Prospect, and he called… Bannon called this guy recently and gave an interview.

It was in this interview that Bannon essentially threw Trump’s North Korea policy under the bus and indicated in a number of other ways that Bannon was running the show, not Trump. On China, Bannon said, “Yeah, we love all this hysteria on the left. We love them being sidetracked. We love them focusing on the monuments and stuff, because the real war that we’re facing is with China,” and so forth. Everybody was asking, “Why do this? Did Bannon think it was off the record?” 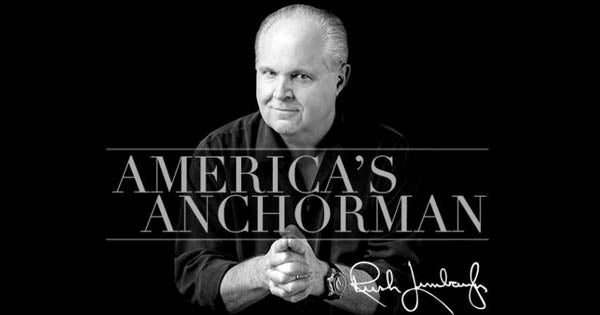 No, he didn’t think it was off the record. He did it on purpose.

So last night The NewsHour — formerly with Jim Lehrer and now with Judy Woodruff, who was not there either — John Yang, I guess, was the correspondent. They get this guy to talk to Kuttner to ask him: Why did Bannon call you? What really went on in that conversation? The question is, “He talked about what he called ‘ethno-nationalism.’ He calls [these right-wing protesters a bunch of] losers, a fringe element. It’s a fringe element. I think the media plays it up too much and we have got to help crush it, help crush it more. These guys are a collection of clowns.'”

He was talking about the Nazis and the white supremacists, and this guy’s asking Kuttner: What did you think when Bannon said that to you?

KUTTNER: That was completely disingenuous because, of course, he as much as anybody else in America is responsible for assembling this collection of clowns as a political force. And if he’s trying to ingratiate himself with somebody who’s an editor of a liberal magazine, The American Prospect, he’s gonna say what he needs to say to try and persuade me that he’s not such a bad guy. But you have to take that with a ton of salt, and I think it is the usual dog-whistle stuff where the alt-right is not gonna think that, uh, Steve Bannon somehow has had a deathbed conversion and he now thinks they’re bad guys.

RUSH: Okay, let’s break this down, because this statement by Kuttner indicates something that is widely believe inside the Beltway, the Washington establishment conventional wisdom. It holds that there wouldn’t be Trump… (interruption) A-ha! “Bannon Says He Has Resigned from Trump’s White House.” What website is this? Circa.com. That’s Sinclair Media. So Bannon’s says he’s resigned. Trump is telling people, “No, no, no, no. I got rid of him.” So the first argument has already erupted. 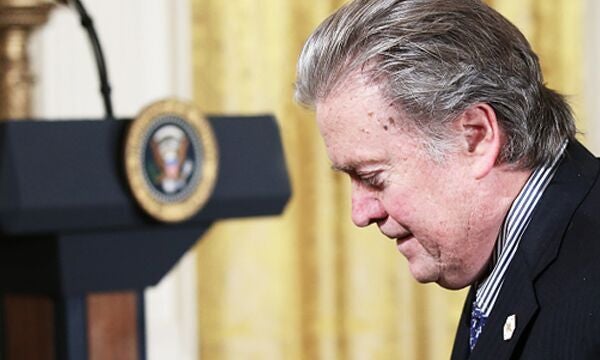 Bannon says he resigned two weeks ago. Bannon called this guy, Kuttner, this week or over the weekend. No, Tuesday of this week. So Bannon called The American Prospect after he’d resigned, talking about his policy in China, his policy in North Korea. Well, anyway, let me break down this Kuttner, because I need to tell you: If you want to follow this, you need to know the foundational base that’s gonna tinge all the reporting on this. Exactly what this guy said is what they all think in the media and in the Washington establishment.

They think that the Nazis and the white supremacists and the Klan are Trump’s base, that that’s who elected Trump and that Bannon assembled it via Breitbart’s website. That’s what they think happened, folks. You may think that sounds idiotic, but they believe that — and Bannon, of course, has encouraged it. I mean, that’s quite a powerful thing to be able to do, to organize about 500 people and have them become a base electorate of a president of the United States? But… (laughing) I’m telling you, they believe this!

You know, I must admit, this has stymied me from the first time I heard this, because the effort here has been to say that Trump’s had nothing to do with the people that voted for him. This narrative portrays Trump as a puppet, essentially, and that this magazine guy and website guy came along and somehow found a group of populists and nationalists to love and support Trump — and they all happen to be Nazis and white supremacists and members of the Klan.

Now, you can think I’m misjudging this all you want, but please do not doubt me. That is what they think. Just judge it with other things you know they think that are outrageously wrong and just add this to it — and Kuttner admits it here in this bite, because Bannon says to Kuttner in the interview, “Well, these guys are a bunch of clowns,” meaning the supremacists and the Nazis and the Klan.

He called ’em “losers,” “a fringe element that the media plays up too much,” they’re trying to “crush” it. They’re “a collection of clowns”. Kuttner doesn’t believe that Bannon’s telling him the truth. He says, “It was completely disingenuous because of course he [Bannon], as much as anybody, is responsible for assembling this collection of clowns as a political force.” The left lives and breathes under so many lies. They accept them. They tell themselves lies that become conventional wisdom.

And, folks, really, I know I’m saying this for the third time, and I guess I do it because I want to make sure you get this. They don’t believe anybody with a brain would have voted for Donald Trump. There has to be some other explanation. And the explanation is Steve Bannon and Breitbart. That Bannon is a Svengali and he’s gone out and he found this collection of fringe elements in the Klan, in the white supremacist movement, the neo-Nazis, and built a website to appeal to them, and then started selling Donald Trump to them, and they bought it.

And in this story what the people inside the Beltway have concluded is that Trump had very little to do with assembling the people that voted for him. It’s one of the ways they marginalize Trump. It’s one of the ways the insiders tell them that Trump is really not a threat to them. That he really didn’t do this. This behind-the-scenes troll guy, this Bannon guy did it, and they really believe it. 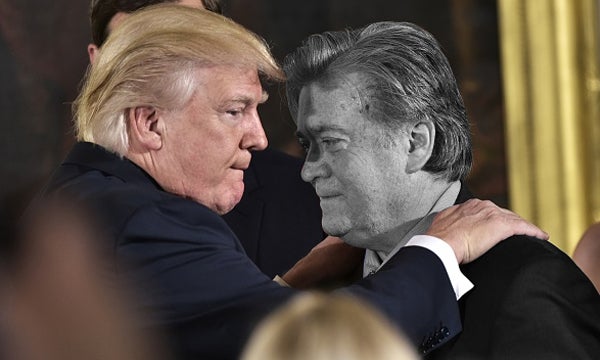 Now, as such, Trump has a golden opportunity to smoke these people if he’ll just do it! Because they are continuing to underestimate him, even in the midst of all this. They are continuing to underestimate. Donald Trump could own these people if he would focus. And I’ll tell you how he focuses. I’ll tell you right now what he has to do to focus. In fact, you know what I’ll do? I’ll assume the role of unpaid strategist here for five minutes.

Let me find something. I was reading National Review last night as just part of the show prep routine that I go through, and Rich Lowry posted something at The Corner, which is their ongoing blog. It was his characterization of Trump’s press conference on Tuesday where he doubled down on the protesters and took back the notion that it was white supremacists and all this that were the problem.

Rich Lowry, “The Breitbart Presidency.” Now, Rich, he’s conservative, he’s the editor at National Review, but as such, there is an establishment — what should I say? Establishment overlap.

Okay. Fox is now saying today is Bannon’s last day. Sarah Huckabee issued a statement, White House chief of staff Kelly and Bannon mutually agreed today would be his last day. So Bannon didn’t resign in two weeks, or he could have still resigned two weeks ago then agreed today is the last day, and Trump’s out there not knowing that telling people that he’s gonna get rid of Bannon. Is that what we’re to believe?

Anyway, I’m trying to tell you how they think in there and why I think if Trump just becomes president of the economy — you know what you mean by that? I’m not trying to be funny with that. Why are you laughing at this? Oh, you’re laughing that Trump didn’t know? It’s a joke that Trump didn’t know. You think I’m being serious with this? I’m making fun of the media reporting here! I’m making fun of the media, not Trump.

Anyway, listen to these two paragraphs of Rich Lowry. This is a comment on Trump’s last press conference that the media just beside itself, thinks it’s the worst thing they’ve ever seen, oh, my God, he needs to be impeached. There’s even a state senator in Missouri that’s calling for his assassination! My state has a state senator calling for Trump’s assassination because of this press conference.

So Rich writes: “Over the past few days, Trump hasn’t spoken as the leader of the country, or even leader of one party, but as a leader of an inflamed faction. This is why it was almost unthinkable that he would give a unifying talk, as any other president would, at the funeral of Heather Heyer, the young woman slain in the vehicular attack by an ‘alt-right’ protester.

“Trump’s sensibility is highly unusual for a politician — let alone for the leader of the free world — but very familiar from the internet or social media. As his news conference showed, his level of argument is at the level of a good Breitbart blogger, or of a Twitter egg of yore. He would absolutely kill it in the comments section of a right-wing website or trolling a journalist.”

And the establishment believes you don’t say that. Leadership, you don’t say that. You rise above it. So Trump’s press conference is characterized as a rant by somebody commenting on a right-wing website, meaning unserious, not very lofty, not very elevated, and certainly not presidential. Yet I would submit to you that most of Trump’s base loved it. They’re tired of taking it on the chin and wish a lot of Republicans would talk that way about the left and the Democrats.