RUSH: Mary in Raleigh, North Carolina. You’re next. It’s great to have you here.

CALLER: What an honor. 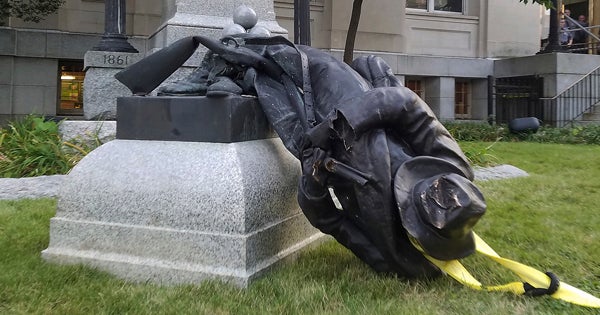 CALLER: As you know, the left is attempting to dismantle and disengage from our country’s magnificent yet sometimes messy history. They’re tearing down Confederate monuments. In fact, just in Durham, 30 minutes away from here in Raleigh, they tore one down recently —

RUSH: Yeah, you know what I found out about that? The woman that actually tore that down —

CALLER: Is a communist.

CALLER: Yes. But you won’t see that much. But, anyway, my point is that they’re trying to rename streets and parks. We’re going through a cultural revolution of sorts. But I think the left needs to sit back, take a breather, and look at Berlin, Germany. Berlin obviously has a horrific, ugly past from its Nazi era, but rather than erasing the past, Berlin is learning from the past.

We were there with my family most recently in 2015, and you can still see remnants of the Berlin Wall, which you just mentioned. You can see the site of the Gestapo headquarters. It’s now a museum. Hitler’s bunker is now designated by a sign. There’s a powerful Holocaust memorial. My point is that in Berlin, Nazi history is not forgotten or white-washed. It is acknowledged. It’s recognized.

And by the left doing this to our country, taking about down these statues, kind of trying to erase the past, they’re doing a disservice to all of us and to my children. I have two young adults, and our youngest is 12, and they need to know that history is messy. It can be ugly, but we can learn from it and use it as a teaching point. And my point is that I think Berlin, Germany, is doing a decent job. I think we would learn a lot from it to mimic some of the things that they’ve done with their past.

RUSH: You know, it’s a good point. I have occasion to come across German media and there are Nazi, neo-Nazi groups that spring up in Germany, and man are they savaged, they are just savaged. Holocaust deniers. The German media goes after these people like you can’t believe. Whether you like that or not. I’m sure this kind of sounds strange to people that don’t know it when you tell ’em, “Yeah, Hitler’s bunker there has been memorialized, it’s a museum.” Or the SS headquarters. 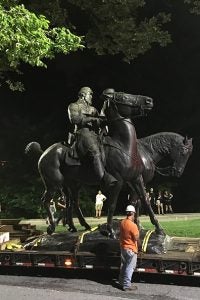 But I’ll tell you, there’s a piece by Wesley Pruden today in the Washington Times about all of this. The headline: “Confederate Statues Gives the Democrats Another Lost Cause.” And the point that he’s making here is, yet again, the Democrat Party is seizing on another issue that isn’t gonna get ’em any appreciably new votes. They’re preaching to the choir, it’s a small choir, and, in addition, they are alienating people.

“Back among the living, you might think the Democrats would be in Hog Heaven, intoxicated with the prospect of slaying Donald Trump at last. … But months of malaise — the French call it ‘ennui,’ or lassitude for lack of excitement — have made havoc of Democratic fundraising.”

You think people are donating to Republicans to reward them for obstructing the Trump agenda on immigration and tax reform? You think that’s why they’re getting it? They’re not getting money for that reason. But the Democrats aren’t raising any. I think one of the reasons why Republicans are getting money is that people that donate money donate it to people in power. Right now that’s the Republicans. That’s one of the explanations.

But there are two or three pieces like Pruden’s here today that say: Let the Democrats do this. Let ’em go ahead. You know, aside from how they’re erasing history, let ’em go ahead. They are, once again, committing suicide. They’re focused on an issue that’s not gonna get ’em a single new vote. They’re preaching to the choir.

Here’s an example. Pelosi’s now demanding that Paul Ryan take down all 10 Confederate statues in statuary hall in the capitol building. She’s walked by those statues every day for 30 years and probably never gave ’em the time of day, but now it’s time to get on the bandwagon and start demanding the Republicans take down the statues of their ancestors. It’s so transparent. A bunch of phony baloney, plastic banana, good-time rock ‘n’ rollers, if they’re even that anymore now that Jerry Garcia is dead.

CALLER: Hi, sir. I just wanted to say mega dittos and what an honor it is to speak to you. And I know that I need to be quick ’cause time is of the essence. I started listening to you in the 1991 at Fort Bragg, North Carolina, which I don’t know if you are aware was named after Braxton Bragg, a Confederate general. And I’m just curious, how would you feel if President Trump came out in favor of removing these Civil War monuments that were put up during the sixties to oppress, as I believe you said, the uppity African-Americans, as a report said, how would the press take that, as long as it was couched in the fact that he was removing these statues put up by the hateful Democratic Party.

RUSH: I think some media people would have strokes and heart attacks. I think you’d need a lot of emergency services personnel to be available to go to all network news headquarters, if Trump came out and did it on the basis of what you’re saying. I think if did he this, if he said, “Okay, I can understand the Democrats not liking their history. I can understand the Democrats wanting to get rid of their heroes.” I, for one, would eat that up. I would love that.

A lot of these statues were erected — do you know in the case of many of the Robert E. Lee statues with him on a horse, do you know that many of the horses’ asses are pointed north? They are. (laughing) They are. Look, the segregationists, up until 1965, were Democrats. If they take this out to its logical conclusion, they’re gonna have to divorce themselves from J. William Fulbright, which is Bill Clinton’s mentor, and old Herman Talmadge of Georgia and Albert Gore Sr., who was one of the segregationists in the Senate, and Howell Heflin of Alabama.

There’s a whole slew of these guys that were the original segregationists, all the way up to ’65 when the Civil Rights Act — it was Lyndon Johnson who had to sell the Democrats on the Civil Rights Act. There’s no mystery about it. Oh, yeah, Ernest Hollings, he did. Ernest Hollings, over the governor’s mansion, raised the Confederate flag. These guys are all singing Dixie at their barbecues back in the old days.

But if they follow this through, folks, they’re gonna have to get rid of a lot of themselves. And that’s what it will get interesting. The Antifa people, you know, some of these people in the Antifa, however they pronounce it, Occupy Wall Street, they’re sympathetic to the Democrats ’cause the Democrats are the political party on their side of things.

But make no bones about them, some of these kids are so far gone with this political correctness stuff that if they learn, for example, about Algore’s dad, it isn’t gonna matter, they’re gonna get rid of Algore just as soon as we get rid of Robert E. Lee statues. I mean, the leftists have done a great job in corrupting the minds of their youth, and at some point this could backfire. I’m glad you called out there.