Polling Data Shows Media Not in Mainstream on Charlottesville

RUSH: Now this polling data that is out there, this is kind of eye-opening. As I say, it is a Marist poll that was commissioned by NPR and PBS. Try some of these bullet points. Trump’s overall disapproval rate is 51%, but he has not lost much support at all among Republicans. His disapproval numbers are steady. He hasn’t had a disapproval number that has increased appreciably recently. 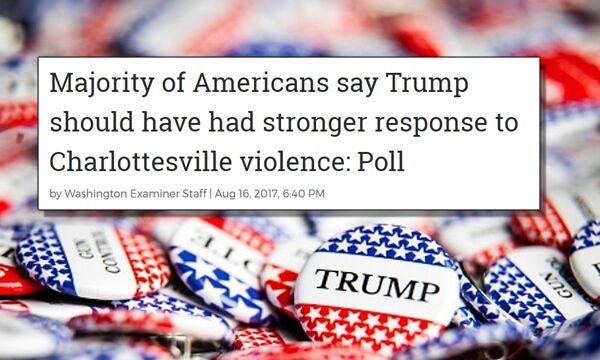 This poll was taken after Charlottesville. Trump’s disapproval numbers did not go up in this poll after Charlottesville. In fact, there was a similar poll yesterday where Trump’s overall disapproval rate was 55%, but his approval rating rate among Republicans was 62%. His support among evangelicals is strong at 58%. Americans who favor leaving the Confederate statues standing, 62% support Trump. Eighty-six percent of Republicans favor leaving the statues standing as historical markers. Sixty-one percent of independents say leave the statues alone.

Does any of this surprise you, Mr. Snerdley? Okay. But why? It surprises you because you don’t know how anybody could put up with this media onslaught. You watched the media after Charlottesville, and you think, “My God, the American people have to hate the guy.” It’s not affecting them. These numbers are no different on Trump than before Charlottesville, and particularly on the Republican side.

And in this poll, the clear majority of all Americans, aside from very liberals, want the statues left alone! This is what Charlottesville was all about! And in this poll — and again, it’s Marist, PBS, NPR — in this poll Trump hasn’t lost any approval number since Charlottesville. That doesn’t compute to a lot of people. Trump’s press conference on Tuesday that supposedly offended everybody, apparently not, folks.

Majorities in every age-group support leaving the statues alone. Every age-group that is surveyed in every one of those groups, support for leaving the statues alone is minimum 60%. Some are higher than that. Are you getting the picture here? What you’re seeing on TV, what you’re hearing by all these analysts and all these panels and all these discussions making it look like everybody is finally fed up with American history, America’s fed up with its history and wants all these monuments and statues gone.

No. It’s a minority that want that.

It’s only liberal and very liberal Americans, who want them down, and that’s a subset; it’s not a minority of that group. But after all of that news, the same poll says 61% of the American people have “little or no confidence in Trump’s leadership of the nation during an international crisis.”

So what are we to make of this? Those two things kind of are at odds. The one, I think, irrefutable conclusion is that the media is overwhelmingly distorting the public’s reaction to Trump’s handling of what happened in Charlottesville. They are blowing that so out of proportion. The media’s handling of this is in no way reflective of public opinion of it — and that, to me, is big. The 61% who say they have “little or no confidence in Trump’s leadership in an international crisis,” that’s kind of a standalone. It’s a problem, yeah.